The Road To Sexism Part 2


“Identifying love with expressing feelings is biased towards the way women prefer to behave in a loving relationship… Both scholars and the general public continue to use a feminized definition of love… Part of the reason that men seem so much less loving than women is that men’s behaviour is measured with a female ruler.”1
—Francesca M. Cancian in her 1987 book Love in America: Gender and Self-Development 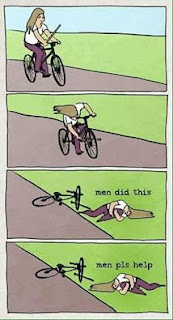 Feminism is bullcrap because feminists don’t practice it. People talk about the bright side of ideological feminism, which is this vague, airy-fairy notion of ‘equality’ that is supposed to evoke warm, fuzzy feelings out of people. Ideological feminism never matches up with practical feminism, which is a perpetual victim narrative where women will always be in some conquered state under the Patriarchy.
When they see me, men and women behave differently towards me because they see a man. They will address me like a child, nor will not address me as a woman. This behavior is not wrong, offensive, or inappropriate. Going from there, asking me to treat women differently “because feminism” is about as dumb as asking women to go out of their way to interpret my behavior as something other than masculine, “because feminism”. It’s never going to happen, and honestly, it would feel odd if someone tried.

Introduction by Gilad Atzmon: In February 2016 a friend encouraged me to pay attention to a new Jewish dissident voice, Jonathan Ofir, an Israeli musician who didn’t agree with Zionism.  I watched Ofir’s statement , I detected a positive humanist inclination, I could see a glimpse of ethical thinking but I could also easily notice the usual duplicity but was hoping to be wrong. Since, at the time,  Ofir seemed to me a novice in the ‘anti Zionist business’ I let him enjoy the benefit of a doubt. I approached Ofir and asked to interview him.

Ofir, initially reacted in a friendly and positive manner, he was happy to engage immediately in a phone interview but I actually insisted upon a written one, just to remove any possibility of me changing his words or taking them out of context. Ofir, once again agreed to a written exchange. However, this changed once he received the questions below. Within a short while I learned from him that he had to decline.

"It's a crime against humanity to criminalise people for self medicating with a plant." Said Deek Jackson
Posted by Angelo Agathangelou at 6:03 pm No comments: Links to this post

Raging Golden Eagle: Bullshit statistics and the mainstream media going out of their way to suppress the truth. Another example of how the media goes out of their way to hide an inconvenient truth because it doesn't fall in line with the agenda they are trying to push.

Read more »
Posted by Angelo Agathangelou at 12:26 pm No comments: Links to this post

The Truth Is Blacks Don't Hate Whites They're Envious Of Them! - Part 1

"Black people will say things to other black people, that doesn't show hatred, but it shows envy! ...People say a black person is cooning when trying to curry favour with white people." Said Tommy Sotomayor.
Posted by Angelo Agathangelou at 10:32 am No comments: Links to this post

'Le Pen will be defeated, and if not,
the CIA will assassinate her.'
By Paul Craig Roberts: Marine Le Pen is the only candidate for the French presidency who represents France. All the rest represent Washington and the EU. Why are the French people so slow to see the obvious facts? France died with Charles de Gaulle. He was the last French president.

Washington, of course, hated De Gaulle, because he would not let France be part of the American Empire. He kept France out of NATO. De Gaulle understood that NATO was unnecessary as a military alliance, as there was no threat of a Soviet invasion of Europe. NATO was Washington’s way of absorbing Europe into the American empire. Stalin himself had made it crystal clear that there would be no Soviet invasion when he eliminated the neoconservatives of his time who wanted to establish Soviet hegemony over the world. “Socialism in one country,” declared Stalin as he killed off the Soviet neoconservatives. 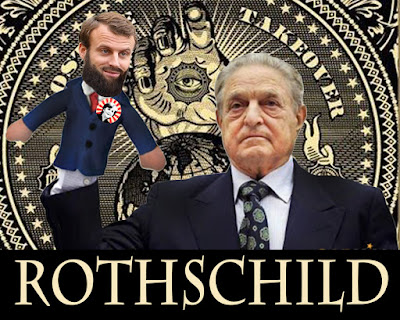 “Freedom And Democracy” Or A Zio Police State? 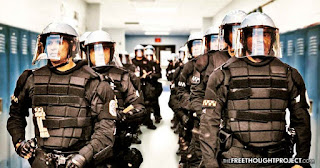 By Matt Agorist: US Children feel violated, parents are furious, and a lawsuit is getting filed after the Worth County Sheriff’s office conducted an illegal search of 900 students — in the name of the war on drugs. The rights-violating intrusive and aggressive patdowns and drug dog searches yielded absolutely nothing.