By William Collins aka MRA-UK: In an article in The Times on 17/5/17, “Caring for the elderly shouldn’t be a girl’s job“, Alice Thomson criticises Mrs May’s manifesto policy to force companies to allow workers to take up to a year of unpaid leave to look after an elderly or sick relative. Her gripe is that “it’s women who are going to bear the brunt of this new plan“. I will make no comment on the policy itself, only on the factual veracity, or otherwise, of this claim of Thomson’s.
Thomson pads out her article with a number of misdirecting irrelevancies, such as issues around paid caring, and maternity versus paternity leave. The issue, though, is who are the unpaid carers? The only ‘evidence’ Thomson offers in the article is,
“It’s women who are going to bear the brunt of this new plan….Daughters are twice as likely as sons to become carers, according to the Office for National Statistics”
Probably most people would think so – because most people have the impression that almost all unpaid caring is done by women. But it isn’t.
I recall that, in 2014, the Men’s Health Forum published a report which showed that, over all age ranges, men are 42% of unpaid carers. I looked it up again to make sure. Here it is,

Nikephoros Gregoras To Husband Being Cuckolded By Beautiful Wife

By Author Douglas Galbi: In fourteenth-century Constantinople, the eminent intellectual Nikephoros Gregoras wrote an eloquent letter in Greek to an unnamed friend. Gregoras’s friend had a beautiful wife. She began cuckolding him only a few days after their marriage. She apparently was also falsely accusing him of sexual improprieties. While expressing outrage and sympathy, Gregoras urged his friend to accept his marital fate as the natural order in marrying a beautiful woman. 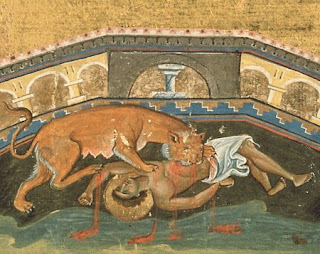 Gregoras’s letter begins with a vague declaration, “I know it very well.” The letter then immediately shifts to intimate, second-personal address. “I know it very well” seems to refer to being cuckolded. Gregoras’s letter shows that he understands cuckolding through examples in classical literature. But his introductory declaration seems personal. It suggests that Gregoras too has been cuckolded.
Gregoras also refers to an unnamed “excellent man” who has informed him yesterday about the addressee’s situation.

Gary Orsum: Another regressive university lecturer who thinks white people should just step aside.
Posted by Angelo Agathangelou at 5:59 pm No comments: Links to this post

Turd Flinging Monkey: What? Were you expecting anything else?

U.S. Attacks Syrian Government Forces - It Now Has To Make Its Choice 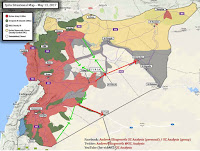 By Moon Of Alabama: The Syrian army is on the way to liberate the ISIS besieged city of some 100,000 and garrison of Deir Ezzor in the east of the country. The U.S. has trained a few thousand "New Syrian Army" insurgents in Jordan and is reportedly prepared to march these and its own forces from Jordan through the east-Syrian desert all the way up to Raqqa and Deir Ezzor. About a year ago it occupied the al-Tanf (al-Tanaf) border station which consists of only a few buildings in the mid of the desert. The station between Syria and Iraq near the Jordan border triangle was previously held by a small ISIS group.
A U.S. move from the south up towards the Euphrates would cut off the Syrian government from the whole south-east of the country and from its people in Deir Ezzor. While that area is sparsely populated it also has medium size oil and gas fields and is the land connection to the Syrian allies in Iraq.
With the western part of the country relatively quiet, the Syrian government and its allies decided to finally retake the south-eastern provinces from ISIS. They want to lift the ISIS siege on Deir Ezzor and close the border between Syria and Iraq with its own forces. The move will also block any potential U.S. invasion from the south by retaking the road to al-Tanf and the Syrian-Iraqi border (red arrows). The sovereign Syrian state will not give up half of the country to an illegal occupation by ISIS or the U.S.

Read more »
Posted by Angelo Agathangelou at 11:54 am No comments: Links to this post

Trump Brings Nothing To Palestinians

By Omar Karmi: Misdirection is the way of magic and conmanship. Control people’s attention and lead them on a merry dance. Have them hand over their wallets or change your clothes in front of a roomful of people without anyone noticing.
It works just as well in politics. Uncomfortable with the public narrative? Don’t answer the question; change the topic; resort to the passive voice or just bomb somewhere (aka, diversionary war theory). 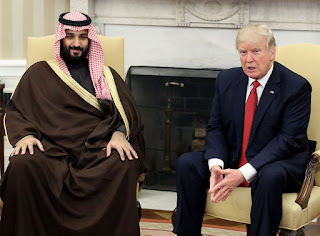 Donald Trump, pictured in the White House with Saudi Arabia’s deputy crown prince Muhammed bin Salman bin Abdulaziz Al Saud.
As Donald Trump embarks on his first foreign trip – reportedly with some reluctance – his entire short tenure as president is beginning to look like one giant diversion, a misdirection so big you find yourself looking everywhere to find out what the “real” story is and checking for that wallet.
Is Trump a master manipulator of the media? Perhaps. But when the 45th US president touches down in the Saudi capital Riyadh for the first leg of a trip that will see him also visit Jerusalem, the Vatican and Brussels – where NATO officials are preparing talking points tailored to a short attention span

A Review Of "Being In Time: The Post-Political Manifesto"

By June Terpstra: Firmly rooted in the Western intellectual tradition, Gilad Atzmon's "Being In Time" opens doors to shed light on the particular ideological constructs that influenced the schools and movements of left and right political wings that have produced a world in poverty and war, offering a matrix of controlled opposition embedded in modern, Jewish, secular politics to distract and destroy from within. Atzmon's analysis, written like an intellectual jazz composition, celebrates Athenian philosophical calls to reason while urging the unpacking of political ideology to reveal the con-game being played to keep power in the hands of those who already have it.
In the first half of the book Atzmon offers a brilliant decoding of left and right wings of the Imperial Houses of Domination. On the left, he gives the reader Marx, Adorno, and the Frankenfurters defending principles of utopianism and what ought to be. To the right, are Breitbart, Murry and Hernnstein, playing Johnny one note for conserving the structures of power in hopes to hold on to their piece of that pie. Atzmon suggests that, "instead of looking at the world through the lens of the Right/Left dichotomy, or a particular ideological perspective, it will be more instructive to impose a meta-ideological method that juxtaposes 'the humane' i.e. the human condition and the political spectrum as a whole. Instead of imposing any particular ideology, be it Right, Left, Marxism, Capitalism, Liberalism, Fascism and so on I want to examine the relationship between a political system and the human condition."

The Conceptual Penis As A Social Construct: A Sokal-Style Hoax On Gender Studies

"The androcentric scientific and meta-scientific evidence that the penis is the male reproductive organ is considered overwhelming and largely uncontroversial.”
By Dr. Peter Boghossian & James A. Lindsay: That’s how we began. We used this preposterous sentence to open a “paper” consisting of 3,000 words of utter nonsense posing as academic scholarship. Then a peer-reviewed academic journal in the social sciences accepted and published it.

This paper should never have been published. Titled, “The Conceptual Penis as a Social Construct,” our paper “argues” that “The penis vis-à-vis maleness is an incoherent construct. We argue that the conceptual penis is better understood not as an anatomical organ but as a gender-performative, highly fluid social construct.” As if to prove philosopher David Hume’s claim that there is a deep gap between what is and what ought to be, our should-never-have-been-published paper was published in the open-access (meaning that articles are freely accessible and not behind a paywall), peer-reviewed journal Cogent Social Sciences. (In case the PDF is removed, we’ve archived it.)
Read more »
Posted by Angelo Agathangelou at 12:03 am No comments: Links to this post