NYT's How To Raise A Feminist Son

Tom Golden of MenAreGood Responds
Men Are Good!: I saw this article in the NYT's and couldn't resist offering the author some feedback. I found it profoundly lacking in its understanding of boys. It seemed to focus not on boys, but what feminist want boys to be. The research we have today tells a story that negates such feminist thinking. I hope you enjoy watching it. ...Was I fair in my evaluation of this article? Probably not in spots. And so it goes. Maybe call it "Performance Analysis"? lol

Read more »
Posted by Angelo Agathangelou at 11:03 pm No comments:

Regards, Bearing.
Posted by Angelo Agathangelou at 8:11 pm No comments:

Vladimir Putin: The Most Powerful Person In The World

By Paul Craig Roberts: It must be wonderful being Vladimir Putin and being the most powerful person on earth. And not even have to say so yourself. The US Democratic Party is saying it for Putin along with the entirety of the Western presstitute media and the CIA and FBI also. The Russian media doesn’t have to brag about Putin’s power. Megyn Kelly, the Western presstitutes, and Western leaders are doing it for them: Putin is so powerful that he is able to place in office his choice for the President of the United States. 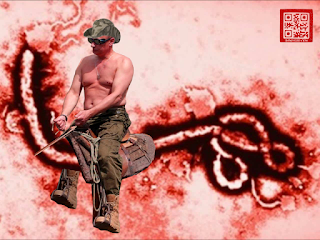 I mean, Wow! What power! Americans are simply out of the game. Americans, despite a massive intelligence budget and 16 separate intelligence services plus those of its NATO vassals, are no match whatsoever for Vladimir Putin.


I mean, really! What is the CIA for? What is the NSA for? What are the rest of them for? Americans would do better to close down these incompetent, but expensive, “intelligence services” and pay the money to Putin as a bribe not to select our president.
Read more »
Posted by Angelo Agathangelou at 2:53 pm No comments: 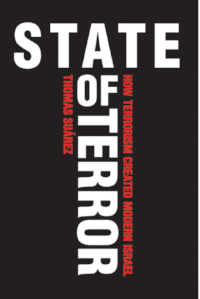 Thomas Surez’s “State of Terror” is a meticulously documented history of Zionism from its early stages in Israel until 1956.  It is the story ofhow a number of secular Jews successfully installed a religious state located on the land of another nation.
The established myth is that after centuries of antisemitism culminating in the Holocaust, the Jews ‘deserved’ Israel, the ‘land without a people for people without a land.’  Historical accounts often deepen and are refined with time and study. Suarez’s book (along with a few others such as Alison Weir’s “Against Our Better Judgement”) convincingly refutes the generally accepted history entirely.
Suarez points out that in 1897 an early Zionist cabled the news to his coconspirators that Palestine was already densely populated. What followed was a terrorist conspiracy to take that land that is shocking in its scope and violence.
Starting around 1918, in what is now Israel, the Irgun, the Lehi (Stern Gang) the Hagana and the Jewish Agency operated at various times as competing and cooperating gangs of thugs. They raised money by robbery and extortion, extracting ‘tributes’ from local businesses, bombing those who failed to pay. The Zionist gangs assassinated Palestinians, police, the British, and Jews whose opinions diverged from theirs.

Read more »
Posted by Angelo Agathangelou at 12:51 pm No comments:

Five People Own Almost As Much As Half the World's Population

While Americans fixate on Trump, the super-rich are absconding with our wealth. 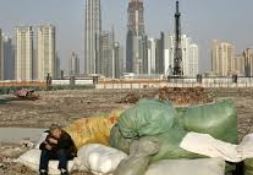 By Paul Buchheit: Last year it was eight men, then down to six, and now almost five.
While Americans fixate on Trump, the super-rich are absconding with our wealth, and the plague of inequality continues to grow. An analysis of 2016 data found that the poorest five deciles of the world population own about $410 billion in total wealth. As of June 8, 2017, the world's richest five men owned over $400 billion in wealth. Thus, on average, each man owns nearly as much as 750 million people.
Why Do We Let a Few People Shift Great Portions of the World's Wealth to Themselves?
Most of the super-super-rich are Americans. We the American people created the internet, developed and funded artificial intelligence, and built a massive transportation infrastructure, yet we let just a few individuals take almost all the credit, along with hundreds of billions of dollars.
Read more »
Posted by Angelo Agathangelou at 11:13 am No comments: 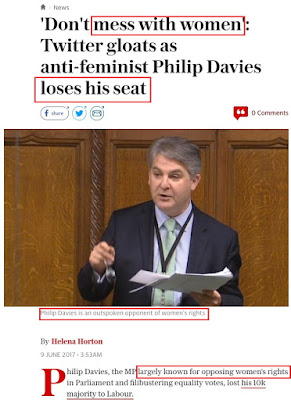 By hequal: On Wednesday we reported on fake news reports on the election “defeat” of Philip Davies MP. The pro-equality politician actually held his seat with a record share of the vote, but that didn’t stop the likes of Michael Crick and Helena Horton seizing on rumours of his defeat and reporting them as fact, thus exposing their bias against him.
Horton’s article was particularly dishonest and unprofessional, not only lying about the result but also repeatedly smearing Davies as a sexist who had “messed with women”. There were an incredible four lies about Davies within the headline / and first line of the article as highlighted in this image [left]:
We can summarise the “journalism” of Horton, a feminist activist and “raging socialist“, as follows:

Read more »
Posted by Angelo Agathangelou at 9:04 am No comments:

karen straughan
Read more »
Posted by Angelo Agathangelou at 7:16 am No comments:

Update: Someone doesn't want you to see these, I've had to find mirrors four times until now, ...because warmongering youtube or copyright fascist Oliver Stone?

Read more »
Posted by Angelo Agathangelou at 2:25 am 1 comment:

Students are running out of reasons to pursue higher education. Here are four trends documented in recent articles: 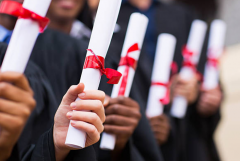 Graduates have little to no improvement in critical thinking skills

The Wall Street Journal reported on the troubling results of the College Learning Assessment Plus test (CLA+), administered in over 200 colleges across the US.
According to the WSJ, “At more than half of schools, at least a third of seniors were unable to make a cohesive argument, assess the quality of evidence in a document or interpret data in a table”. The outcomes were the worst in large, flagship schools: “At some of the most prestigious flagship universities, test results indicate the average graduate shows little or no improvement in critical thinking over four years.”
There is extensive literature on two mechanisms by which college graduates earn higher wages: actually learning new skills or by merely holding a degree for the world to see (signaling). The CLA+ results indicate that many students aren’t really learning valuable skills in college.
As these graduates enter the workforce and reveal that they do not have the required skills to excel in their jobs, employers are beginning to discount the degree signal as well. Google, for example, doesn’t care if potential hires have a college degree. They look past academic credentials for other characteristics that better predict job performance.

Read more »
Posted by Angelo Agathangelou at 12:07 am No comments: