The man who set himself on fire
outside Parliament yesterday has died.

New Zealand Herald: Witnesses to yesterday's horrifying tragedy say they had seen the man earlier in the week outside the Court of Appeal with protest signs that suggested he was involved in a custody dispute.
He died in Wellington Hospital overnight. 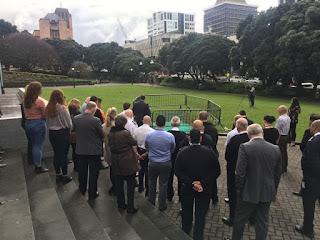 The site outside Parliament has been blessed this morning.
Witnesses say kitchen staff from the Backbencher pub sprinted with buckets of water and fire extinguishers to help douse the burning man yesterday afternoon.

Eli Chamberlain was walking through the Parliament grounds when he saw smoke coming from near the forecourt.
"I thought a protester had set off fireworks," he said.
"Then I realised it was something quite serious. I didn't see him on fire but I saw people running towards him."
The injured man was lying on the ground with up to 20 people surrounding him. Most were standing in shocked silence but several were pouring water over him, Chamberlain said.

Read more »
Posted by Angelo Agathangelou at 9:54 pm No comments: 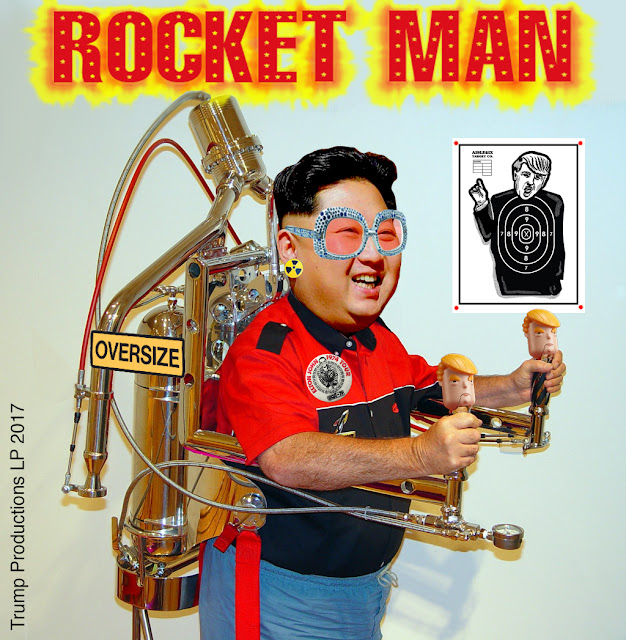 Read more »
Posted by Angelo Agathangelou at 5:49 pm No comments:

By Tyler Durden: For the first time since 2008, a team of Wall Street Journal journalists has been allowed to visit and document the North Korean capital city of Pyongyang just as tensions between the US and its longtime geopolitical foe are reaching a boiling point.
The team of reporters was taken on a guided tour of the showcase capital, reporting that the country’s nuclear ambitions appear to be etched into the city’s landscape. Giant sculptures of atoms sit on top of new apartment towers built for the country’s nuclear scientists. 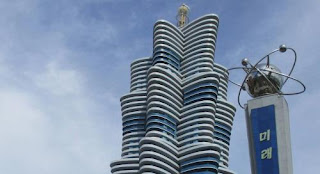 An atomic sculpture outside a newly constructed residential building for the country's nuclear scientists.
The atomic aesthetics, WSJ said, only reinforced the idea that the country would never voluntarily part with its nuclear program.
“During a recent visit, the first by The Wall Street Journal since 2008, the city’s atomic aesthetics reinforced the message government officials conveyed repeatedly to the Journal reporters: North Korea won’t part with its nuclear weapons under any circumstances and is resolved to suffer economic sanctions and risk war with the U.S. to keep them.”
One North Korean official told the WSJ that the country has ”grown up” and that it isn’t “interested in dialogue that would undermine our newly built strategic status.”

Max and Stacy discuss the China Effect on oil and bitcoin markets. In the second half, Max interviews Chris Blasi of the PMC Ounce. They debate whether or not bitcoin is the new gold. Chris argues only gold is gold but that bitcoin is an interesting new financial asset.
Posted by Angelo Agathangelou at 1:17 pm No comments:

Being In Berlin In Time

"I left Judaism behind, but I still keep on marketing. ...A long time ago, but I think within our living memory, politicians claimed to represent us and we tended to believe that they were somehow an extension of our whims, our wishes and at a certain stage this unique bond between us and our political system kind of evaporated. At a certain stage it became clear that we were reduced into consumers and the politicians are doing very little except maintaining consumption." Said Gilad Atzmon.

Read more »
Posted by Angelo Agathangelou at 11:40 am No comments:

Secrets You Need To See

"What's a few more thousands of lives Mr Trump, what's a few more trillions in debt? It's called nation building, miles from nowhere. Nation building by any other name spends the same. ...Blaming Pakistan for Americas fiasco, just doesn't cut it. After 16 years of a complete failure, all of a sudden it's Pakistan's fault? Who's fault will it be next Year when it's still a failure? Trump's rant only pushes Pakistan closer to China and Russia who's been coming to Pakistan's defence throughout Trump's threats and if anyone's aiding terrorists its the US. Russia is now warning America to stop dropping supplies to [Jewish state Mossad run] ISIS in northern Afghanistan or else it will intervene." Said ex-Jew Nathanael.
Posted by Angelo Agathangelou at 8:27 am No comments: 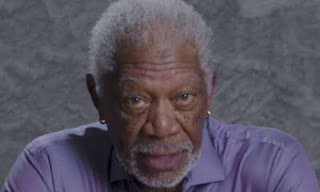 All Kremlin has to do to show how awfully Russophobic the US establishment is, is translate American propaganda about Russia
The Saker: Quite a while ago I wrote an article entitled “Counter-Propaganda, Russian style” in which I tried to show that far from censoring the russophobic propaganda of the AngloZionist Empire, the Russians try hard to give it as much visibility in Russia as possible.  The reason for that it very simple: by showing the Empire’s propaganda the Russian media provides incontrovertible evidence of the hatred the Empire has for Russia and for the Russian people.  This very slick counter-propaganda technique has very much contributed to the quasi-disappearance of pro-Western feelings in Russia (I estimate the total amount of pro-Western people in Russia at somewhere in the range of 3%-5% max).
This time again, as soon as the so-called “Committee to Investigate Russia” posted its video about being at war with Russia, the main Russian TV channel “Russia 1” translated and showed it during the prime time show “60 minutes”.  So, just to share this with you – here is Morgan Freeman dubbed in Russian.
Enjoy!

Russia Warns US In Unprecedented "Secret" Face-To-Face Meeting Over Syria, But What's The Endgame?

By Tyler Durden: The moment the first Russian jet landed in Syria at the invitation of the Assad government in 2015, Putin placed himself in the driver's seat concerning the international proxy war in the Levant. From a strategic standpoint the armed opposition stood no chance of ever tipping the scales against Damascus from that moment onward. And though US relations with Russia became more belligerent and tense partly as a result of that intervention, it meant that Russia would set the terms of how the war would ultimately wind down.

Russia's diplomatic and strategic victory in the Middle East was made clear this week as news broke of "secret" and unprecedented US-Russia face to face talks on Syria. The Russians reportedly issued a stern warning to the US military, saying that it will respond in force should the Syrian Army or Russian assets come under fire by US proxies.
The AP reports that senior military officials from both countries met in an undisclosed location "somewhere in the Middle East" in order to discuss spheres of operation in Syria and how to avoid the potential for a direct clash of forces. Tensions have escalated in the past two weeks as the Syrian Army in tandem with Russian special forces are now set to fully liberate Deir Ezzor city, while at the same time the US-backed SDF (the Arab-Kurdish coalition, "Syrian Democratic Forces") - advised by American special forces - is advancing on the other side of the Euphrates.

Read more »
Posted by Angelo Agathangelou at 2:16 am No comments:

Read more »
Posted by Angelo Agathangelou at 12:34 am No comments: