When Will She Come?

Ex-Jew Nathanael said. "Silently hidden from view a one world governance is forming of which Jews are the planners. ...The Jewification of the world continues to grow, Israel's power increases, hanuka replaces Christmas and the holocaust religion makes matters out of Jewish corpses. With that shield of victimhood the economic planners go untouched."
Posted by Angelo Agathangelou at 9:15 pm No comments: Links to this post

Man In Medieval Baghdad Foolishly Acted As A Courtly Lover

By Author Douglas Galbi: A young man pretending to be an aristocrat arrived at a banquet in eleventh-century Baghdad. A slave girl  — beautiful, highly cultured, and wealthy — was singing there. She enthralled him. 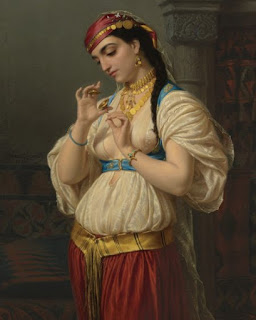 In fashionable devotion to the singing slave girl, the young man refrained from eating even though he was dying of hunger. He became inebriated from drinking sweet date wine. Then the love-struck young man saw roses. He grabbed them and ate them. The slave girl whispered behind her tambourine to her master:

By God, I beg of you, call for something for this young man to eat, or else his shit will become honeyed rose jam!

The singing slave girl cared for the foolish young man.
The young man was dressed in only a brocade robe. The night was cold. He began to shiver, and his teeth chatter. He said to the slave girl, “I want to embrace you.”

The Future Of The EU At Stake In Catalonia 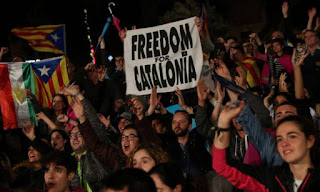 Nano-Franco is Spanish Prime Minister Mariano Rajoy, whose heroic shock troops were redeployed from a serious nationwide terrorist alert to hammer with batons and fire rubber bullets not against jihadis but … voters. At least six schools became the terrain of what was correctly called The Battle of Barcelona.
Extreme right-wingers even held a demonstration inside Barcelona. Yet this was not shown on Spanish TV because it contradicted the official Madrid narrative.
The Catalan government beat the fascist goons with two very simple codes – as revealed by La Vanguardia. “I’ve got the Tupperware. Where do we meet?” was the code on a prepaid mobile phone for people to collect and protect ballot boxes.

Raging Golden Eagle: And then bragging and writing books about it too! Though on the bright side, the fact that kids nowadays have to be tricked into this is a good sign. It means they are smart enough to spot the BS.

By Gilbert Doctorow: From time to time, the Kremlin uses the Sunday evening weekly news wrap-up program of Dmitry Kiselyov on state television channel Rossiya-1 to send blunt and public warnings to Washington without diplomatic niceties.
Last night was one such case and we must hope that the intended audience within the Beltway can put aside its focus on Russia Today’s supposed fake news long enough to read a real message from Moscow.
The last such message came in the week following the April 8th Tomahawk attack on a Syrian air base that Donald Trump sprung on the world, allegedly to punish the regime of Assad for a chemical attack on a village in Idlib province. 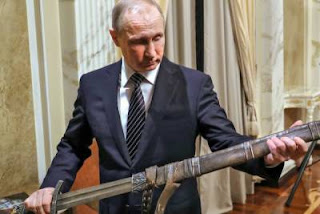 Kiselyov used his airtime then to spell out the Russian response, which he characterized as unprecedented in scope and seriousness. It was essential to put all of its elements together in one place, as he did, because our boys in the Pentagon chose to downplay one or another element in isolation, such as the Russian installation of their Iskander nuclear potential missiles in Kaliningrad, or the abrogation of the deconfliction agreement relating to air space over Syria, or the dispatch of still more Russian vessels to the Eastern Mediterranean equipped to sink our Navy.

Read more »
Posted by Angelo Agathangelou at 9:43 am No comments: Links to this post

The Rise Of Eugenics - Why Big Oil Conquered The World

Corbett: Eugenics. This was the guiding vision of JDR3 and the Rockefeller family’s “philanthropy.” A vision that cast the Rockefellers and their fellow oiligarchs as superior families, fit by very virtue of their wealth and success to guide the course of world events. The power to determine who was fit to breed and who was too poor to pass on their genes... 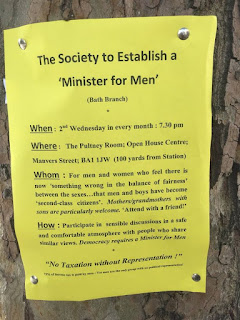 The debate began after a poster announcing meetings of the ‘Bath branch’ of the Society to Establish a ‘Minister for Men’ was spotted in the city.
The poster invites people who believe “men and boys have become second-class citizens” to attend regular meetings for “sensible discussions...with people who share similar views”.
The bright yellow poster drew swift condemnation on Twitter after Labour councillor Joe Rayment posted a picture of it with the comment: “The absolute state of this.”
But others leapt to its defence, citing the right to assemble and the right to representation.
Michael Norton, Conservative councillor for Lyncombe ward, tweeted: “It’s actually a very good idea.”

By Gilad Atzmon: Jewish Anti Zionists are occasionally irritated by the ‘conflation’ of ‘Zionism and Judaism’ but the terms are inherently related.
Conflation is usually understood as the merging of two or more distinct sets of information, texts, ideas, etc. into one. Does this concept apply to Zionism and Judaism? Are Zionism and Judaism distinct terms? Are Jews and Zionism categorically different from each other?
For example, can Americanism and exceptionalism be conflated? Can round and circular be conflated? The distinction between terms that are related can be confusing. But the relationship between Jews and Zionism is clear. This is also true of the relationship among Zionism, Jews and Judaism. These terms are intrinsically related politically, culturally, religiously and at times they form a metaphysical continuum.
Rabbi Yaakov Shapiro, probably the most eloquent Torah Jew spokesperson, has repeatedly argued that those who‘conflate’ Judaism and Zionism are “either Zionists or anti-Semites.” But Zionism and Judaism, as we will see next,  are integrally related.
The vast majority of Rabbinical Jews see Judaism and Zionism as correlated precepts. This is not a recent phenomenon. As early as 1942, at the peak of WWII, 818 orthodox American rabbis signed a document reaffirming the essential bond between Zionism and Judaism.

Read more »
Posted by Angelo Agathangelou at 1:42 am No comments: Links to this post