Gary Orsum:
Collaboration with Beware of Darkness.
Posted by Angelo Agathangelou at 11:27 pm No comments: Links to this post

Is Rachel Eden A British Politician Or An Israeli Asset?

By Gilad Atzmon: It keeps getting better. Rachel Eden, the shameless Labour councillor who organised a protest against me without knowing who I am and what I stand for, is on the ultra Zionist We Believe in Israel list of the 216 General Election candidates who have pledged their support for Israel.

Along with other treacherous parliamentary candidates Rachel Eden vowed “to oppose the extremists who challenge Israel ’s right to exist.”
Is it really extreme to demand that Israel becomes a state of its citizens as opposed to a state of the Jews? Our disgraceful ‘Labour’ candidate Rachel Eden is pledging support for the existence of a state that is defined by race and racial privileges.
Eden further promised “to support the right of people in the United Kingdom to enjoy Israeli culture … without fear of discrimination, boycotts, harassment and/or intimidation.”

I Feel, Therefore I Am


Independent Man
Posted by Angelo Agathangelou at 4:21 pm No comments: Links to this post

Jump In The Mayo

DoctorRandomercam: This is too many levels of cultural appropriation for me to count on one set of genitalia. And it's only going to get gnarlier from here.

Read more »
Posted by Angelo Agathangelou at 2:16 pm No comments: Links to this post

By Paul Elam: Recently, my friend Tom Golden did a video on blue pill psychotherapy talking about the biasing effect of gynocentrism on the practice of therapy.
His talk reminded me that gynocentrism doesn’t just shape the rules and expectations about how men and women should interact, it shapes virtually all of the narratives we live by. 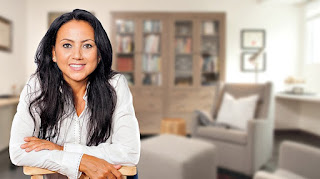 Now, over the years I’ve beaten a lot of horses to death on the importance those narratives because they are that important. They shape our beliefs, guide our decisions and often narrow our thinking.
Getting married is a good example. When men make that decision, frequently at an age where they are ill prepared for it, they are guided by their narrative — by their story of what marriage is. The mythology is similar in most men; they meet the woman they want to share life with and set about working toward a shared future. They understand that marriages require work, but in their story the characters are willing to do it, willing to suffer each other’s differences with enough grace to hold things together, and move on to children and a generally happy-ever-after life.
And they go all in, fully vulnerable, blindly assuming that their story has one conclusion; that it can’t or rather won’t be denied the generally happy ending.

The Mankind Initiative:
BBC Radio 5 - Domestic Abuse Feature on Male Victims of Domestic Abuse.
Posted by Angelo Agathangelou at 8:46 am No comments: Links to this post

Lovely Ladies For Men’s Issues Advocate Fighting Back Against Feminism

By Ben Smart: Vanessa Lussier is a self-described advocate for men’s issues. She created the group Lovely Ladies for Men’s Issues with two other men’s issues advocates. 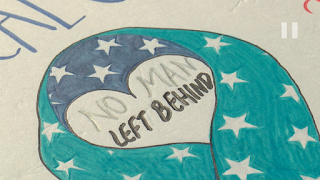 “All we really want to do is use our freedom of speech to talk about men’s issues and other issues that aren’t really discussed, or are seen as controversial,” Lussier said.
Her group’s target issues include domestic violence against men, custody battles, and supporting military veterans.
“Not in any specific order, some of the most important issues that we try to challenge are male genital mutilation, also called circumcision, which is still legal in the United States, and custody battles are often in favor of the mother, even if the mother is unfit to take care of the child, as well as veterans. Many veterans are homeless,” Lussier said.
Lussier’s passion advocating for men’s issues began in high school.
“Quite a few of my friends started getting deep into women’s rights and social justice, and I noticed that they became very bitter towards the thought of men’s issues, and I thought that wasn’t very fair,” she said.
The feminist movement is also an issue the group takes on.
“Feminism was a good idea that got taken advantage of by people who are biased, and don’t really want equality," Lussier said. "They just want to either make money or they want to spread lies that are actually quite harmful to men, like saying that there’s a patriarchy, that all men are potential rapists.”

Read more »
Posted by Angelo Agathangelou at 6:12 am No comments: Links to this post 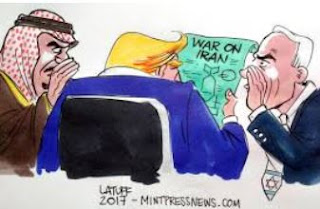 Can Generals James Mattis (US Secretary of Defense) and John Hyten (Head of US Strategic Command) Prevent a Disaster?
By James Petras: Israeli Prime Minister Benjamin 'The Baby Butcher Of Gaza' Netanyahu and the Presidents of the 52 Major Jewish American Organizations are leading President Trump, like a puppy on a leash, into a major war with Iran. The hysterical ’52 Presidents’ and ‘Bibi’ Netanyahu are busy manufacturing Holocaust-level predictions that a non-nuclear Iran is preparing to ‘vaporize’ Israel, ,  The buffoonish US President Trump has swallowed this fantasy wholesale and is pushing our nation toward war for the sake of Israel and its US-based supporters and agents. We will cite ten recent examples of Israeli-authored policies, implemented by Trump in his march to war (there are scores of others).


1. After many years, Israel and ‘the 52 President’ finally made the US withdraw from the United Nations Educational, Scientific and Cultural Organization (UNESCO) because of its detailed documentation of Israeli crimes against Palestinian people. Trump complied with their demands.
Read more »
Posted by Angelo Agathangelou at 3:34 am No comments: Links to this post

What’s Your Problem With Her Sexual Past? + Why Women Lose The Dating Game