Regards, Bearing.
Read more »
Posted by Angelo Agathangelou at 11:41 pm No comments: Links to this post

'Made completely stupid by Identity Politics'

By Dr. Paul Craig Roberts: Before the idiots in Washington get us blown off of the face of the earth, the morons had better come to terms with the fact that the US military is now second class compared to the Russian military.
For example, the US Navy has been made obsolete by Russia’s hypersonic maneuvering Zircon missile.
For example, the speed and trajectory changes of the Russian Sarmat ICBM has nullified Washington’s ABM system. One Sarmet is sufficient to take out Great Britain, or France, or Germany, or Texas. It only takes a dozen to wipe out the United States.
Why don’t you know this?
For example, Washington’s enormously expensive F-35 jet fighter is no match whatsoever for Russian fighters.
For example, US tanks are no match for Russian tanks.
For example, Russian troops are superior in their combat readiness and training and are highly motivated and not worn out by 16 years of pointless and frustrating wars over no one knows what.
If the US ends up in a catastrophic war with a militarily superior power, it will be the fault of Hillary Clinton, the DNC, former CIA director John Brennan and the military/security complex, the presstitute media, and the American liberal/progressive/left, which, made completely stupid by Identity Politics, has allied with neoconservative warmongers against President Trump and prevented Trump from normalizing relations with Russia.
Without normal relations with Russia, nuclear Armageddon hangs over us like the sword of Damocles.

By Jordan Holbrook: Earlier this year, I wrote in The Conservative Woman an article titled ‘Marx and the campus are feminism’s recruiting sergeants’. Do not be fooled into thinking the ‘campus’ element is limited purely to universities; the indoctrination is happening in secondary schools as well. Shoreham Academy in Brighton is one such example.

In the English department, students were required to write an essay on a Guardian article titled ‘Taylor Swift is tough, cool and in control. Unlike Donald Trump’. The article, for those who wish to both save themselves the horror of reading such drivel and to also deny The Guardian a click on said garbage, loosely attacks Trump for being temperamental then, rather flimsily, attempts to segue way into lauding Swift for her sassiness during a sexual assault hearing. The article ends with a panegyric on Swift’s accomplishments and how she should be the President and not Trump. I’m not joking.

Read more »
Posted by Angelo Agathangelou at 3:37 pm No comments: Links to this post

AFRICOM Is The Question

'Obama 'The Baby Bomber', 'Tripoli' Clinton and their NATO partners are responsible for bringing state sponsored terror to the entire region.'
By Margaret Kimberley: “They use ludicrous terms like ‘gold star family’ and make the case for continued American aggression around the world.”

The desire to be affirmed by American society has dangerous consequences for black people. This pernicious dynamic creates the inclination to worship any black face in a high place or to defend questionable activity. The death of special forces Sergeant La David Johnson in Niger is a case in point. Donald Trump’s racism and stupidity prevented him from performing the simple task of conveying appropriate condolences to Johnson’s widow. The ensuing brouhaha focuses on what Trump said in the phone call overheard by Congressional Black Caucus member Frederica Wilson.


Almost no one is asking about the fact that American troops are stationed in Africa at all. Few people realize that such a thing as the United States Africa Command (AFRICOM ) exists and that the military forces of most African nations have been under the de facto control of this country since the George W. Bush administration.

Read more »
Posted by Angelo Agathangelou at 12:31 pm No comments: Links to this post

By Tyler Durden: A television interview of a top Qatari official confessing the truth behind the origins of the war in Syria is going viral across Arabic social media during the same week a leaked top secret NSA document was published which confirms that the armed opposition in Syria was under the direct command of foreign governments from the early years of the conflict. 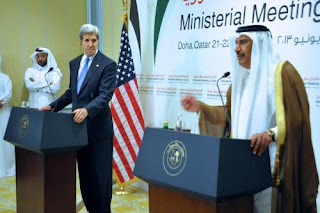 A 2013 London press conference: Qatari Prime Minister Sheikh Hamad bin Jassim bin Jabr Al Thani with U.S. Secretary of State John Kerry. A 2014 Hillary Clinton email confirmed Qatar as a state-sponsor of ISIS during that same time period.
And according to a well-known Syria analyst and economic adviser with close contacts in the Syrian government, the explosive interview constitutes a high level "public admission to collusion and coordination between four countries to destabilize an independent state, [including] possible support for Nusra/al-Qaeda." Importantly, "this admission will help build case for what Damascus sees as an attack on its security & sovereignty. It will form basis for compensation claims."
As the war in Syria continues slowly winding down, it seems new source material comes out on an almost a weekly basis in the form of testimonials of top officials involved in destabilizing Syria, and even occasional leaked emails and documents which further detail covert regime change operations against the democratically elected Syrian government.


"Those sex robots may be capable of much more than sex."
Said PaulElam.
Read more »
Posted by Angelo Agathangelou at 5:45 am No comments: Links to this post

Max and Stacy discuss the Morgan Stanley report proving that the UK taxpayer-financed ‘help to buy’ program has merely benefited property developers to the same exact amount as was given by the taxpayer. In the second half, Max continues his interview with Michael Pento of PentoPort.com about the latest in market euphoria. Will it crash? And, if so, when?
Posted by Angelo Agathangelou at 3:58 am No comments: Links to this post 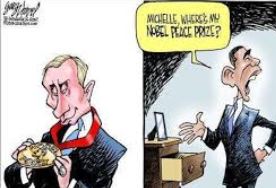 By Robert BRIDGE: For many years, and despite all evidence to the contrary, the Western media has forwarded the inane idea that Vladimir Putin ranks in the same club with some of history's most loathsome creatures, up to and including Hitler.
The reality is that the Russian leader has done more to promote the cause of global peace and security than any other Western leader in recent times. That explains why he is the object of such intense scorn.
Putin's rise as a statesman of the first magnitude began, oddly enough, with the terror attacks of Sept. 11, 2001 on the United States. Since that day, Washington has taken advantage of that national tragedy to achieve specific geopolitical ends, the majority of them - coincidentally or not - diametrically opposed to Russia's own national security. Moscow, for its part, was expected to serve as nothing more participatory than a captive audience to the US war machine as it began its destruction tour through the Middle East, most notably in Afghanistan and Iraq.
In late 2013, the tide began to turn, as the violence began to roost on Russia's doorstep. Kiev had suddenly erupted in protests against the government of then-Ukrainian President Viktor Yanukovich, whose only crime had been to suspend the implementation of an association agreement with the European Union.
Read more »
Posted by Angelo Agathangelou at 1:35 am No comments: Links to this post