My Email To Daniel Storey

By Jordan Holbrook: Daniel Storey is the ‘journalist’ behind the smear piece in Football365 that attacked J4MB and ICMI ’18. His petty attack has rightfully received condemnation for what he wrote but, there was one comment made by Mr Storey that I had to pick up on. I have sent him an email on it and I have copied it below.

***
Dear Mr Storey,
My name is Jordan Holbrook and I am writing to you regarding your Football365 article titled “Questions for Birmingham over links to political party”.
But, before I offer my thoughts on your article, I would like to introduce you to someone, a young man named Jay Cheshire. This is him here:
Young Jay was your typical 17-year-old kid, he was in college, focussing on his education, and was described as ‘mature and well-liked’. He was a sixth form student at Bitterne Park School studying English Literature, Film Studies and Geography and hoped to become a history teacher or a writer.
He had a bright future ahead of him and, like most kids his age, he had a few troubles, one such trouble being he was suffering from depression. He was on antidepressants and had had a psychiatrist since the age of 13 but, in March 2015, his state of mind improved, leading to doctors to agree that CBT was not urgently needed any more. This was all changed when he was falsely accused of rape by a fellow student.

'People say he bears a strange resemblance to Hillary Clinton - apparently they use the same brand of pancake makeup.'
By Patrick Fleming: The Vladimir Lenin cult is alive and well in Russia, and has been particularly in evidence this year as the country plunges into the old and fierce debates about its historical past on this 100th anniversary of Russia's Bolshevik revolution. 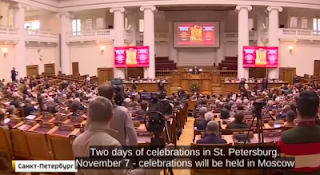 This Russian TV news segment reports on his admirers who gathered from all over the world to celebrate him.


The country seems to consist of three groups, those who think he was one of the most evil men to ever live, those who think he was a hero who made Russia great, and those who don't really know and are confused by the polar opposite versions they encounter (most of the population).
Whatever the case, his body is still embalmed on Red Square, so if you haven't had a chance to have a real, live glimpse of this extraordinary historical figure, you had better hurry up.


One of these days they will probably cart him out of there.

Bob Mike Buchanan: Our thanks to John for tracking down the apparent author of the Football365 piece, a trashy piece containing errors and misleading statements, which seemingly resulted in Birmingham City FC inadvisedly terminating the contract for ICMI18, despite having no legal grounds to do so. The article didn’t contain the author’s name – a sure sign of cowardice – but we believe it to be Daniel Storey. His Twitter account is @DanielStorey85, his tweets relating to ICMI18 are here. He writes:

An Ear for Men
Read more »
Posted by Angelo Agathangelou at 10:49 am No comments: Links to this post

Women Who Should Be In Prison VI

By Paul Craig Roberts: The insouciant American electorate is so inattentive that it routinely elects enemies of civil liberty to represent the public in Congress. Last Wednesday Rep. Adam Schiff (D, CA), Rep. Trey Gowdy ( R, SC), Sen. Dianne Feinstein (D, CA), Sen. Mark Warner (D, VA), Rep. Jackie Speier (D, CA), Sen. Tom Cotton (R , AR ), and Rep. Joaquin Castro (D, TX) tried to intimidate executives from Facebook, Twitter, and Google into blocking all digital dissent to the anti-Trump/Russian line taken by the DNC and military/secrurity complex and to serve as spy agencies for the CIA.
Two of the above—Gowdy and Cotton—are Republicans who have aligned themselves with the attack on Russia and Republican President Trump. What unites the members of the two parties is that they want a police state. Jackie Speier demands to know from Google why Google hasn’t “shut down RT on YouTube.” Joaquin Castro wants messages linked to Russia turned over to the US government. Trey Gowdy wants false statements blocked, which would mean that the entire print and TV media in the US would be shut down along with Congress, John Brennan, Robert Mueller, and James Comey. Gowdy does not know that the First Amendment guarantees free speech and leaves it up to the public to decide what is true and what is false.
You tell me. What kind of insouciant people are capable of electing representatives who do not respect the Bill of Rights? Is a country whose government does not respect its own Constitution a democracy? Is such a country an exceptional, indispensable country? Or is it a completely corrupt entity whose government no longer has the slightest allegience to the Bill of Rights and the US Constitution?

Scooby Mystery: Seriously, Why Can't I Find A Decent Man?

"And I would have gotten away with it too
if it wasn't for you pesky MHRAs!"
Turd Flinging Monkey:
Another Scooby-Doo mystery solved!
Read more »
Posted by Angelo Agathangelou at 2:25 am No comments: Links to this post

Pandering To Jewish Israel Has Got To Stop

Pledges of loyalty to Israel are un-American
By Philip M. Giraldi: Most Americans have no idea of just how powerful Israeli and Jewish interests are. Two recent stories out of Kansas and Texas illustrate exactly how supporters of Israel in the United States are ready, willing and able to subvert the existing constitutional and legal protections that uphold the right to fair and impartial treatment for all American citizens.

The friends of Israel appear to believe that anyone who is unwilling to do business with Israel or even with the territories that it has illegally occupied should not be allowed to do business in any capacity with federal, state or even local governments. Constitutional guarantees of freedom of association for every American are apparently not valid if one particular highly favored foreign country is involved.
Maryland became the most recent state to jump on the Israel bandwagon last week. Currently twenty-two state legislatures have passed various laws confronting boycotts of Israel because of its human rights abuses, in many cases initiating economic penalties on those organizations and individuals or denying state funds to colleges and universities that allow boycott advocates to operate freely on campus.

'It is past time to shut the door on the Israeli influence machine and take back what remains of truly responsive and representational government.'
Read more »
Posted by Angelo Agathangelou at 12:36 am No comments: Links to this post