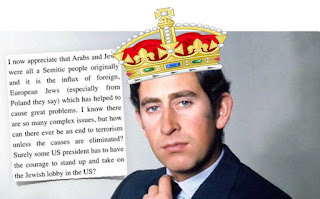 By Gilad Atzmon: Yesterday the impossible happened -- the ‘non existent’ Jewish Lobby attacked Prince Charles for mentioning the ‘Jewish Lobby.’
Amid the ongoing outburst of Jewish paranoia, Prince Charles has come under fire after the exposure of a private letter he penned in1986 in which he blamed the “influx of foreign Jews” for causing unrest in the Middle East and called on the US to “take on the Jewish lobby.”

The Prince’s observations are astute and accurate.  And for the Brits there is the clear message that by the 1980s the Prince was well- qualified to become their King as well as their Prime Minister and Foreign Minister.
The British Zionist league sprung into action when the news of the leaked letter broke. The farcical Campaign Against Antisemitsm (CAA) launched an immediate attack on the Royal Prince. Most outrageously, they called upon the Prince to “repudiate” his 30 year old letter. Openly and shamelessly the CAA actually falsified the meaning of Prince Charles’ words. Although Prince Charles wrote about the fact that an ”influx of European Jews” drove the Zionist settlement in Palestine, the deceitful CAA claims that Prince Charles referred to an “influx” of Holocaust survivors.”
Read more »
Posted by Angelo Agathangelou at 10:16 pm No comments: Links to this post

Professors: It's Not Okay To Be White

'Whiteness is itself the 21st century’s Mark of Cain'
Authored by Scott Greer: “Can my children be friends with white people?”
This bizarre question is the basis of a New York Times op-ed published Sunday, and the author answers it with a “no,” albeit with some exceptions.


“History has provided little reason for people of color to trust white people in this way [of genuine friendship], and these recent months have put in the starkest relief the contempt with which the country measures the value of racial minorities,” writes Ekow N. Yankah, a law professor at Yeshiva University.

According to Yankah, examples of white “contempt” for racial minorities in recent months include concerns over the opioid epidemic, worries over rising unemployment among working-class whites, and criticism of NFL players kneeling for the anthem. Apparently those issues receive far more attention than the woes of African-Americans, thus revealing the secret disdain whites have for non-whites.

Ryan Dawson: A horrible six year conflict befell Syria with a multitude of factions fighting for territories backed by a score of foreign players. The script for war as with Iraq in 2003 originated with Zionist partisans with Israeli interests in mind. From Oded Yinon to the Israeli "Clean Break" papers, the Zionist regime made it very clear what their intentions were in Iraq and Syria. American mass media had a uniform message that "Assad must go" for years until the Trump administration took power. After cutting CIA funding and support for "moderate rebels" which was always a cover of plausible deniability to fund Jihadist Al Qaeda groups, which wouldn't be a first for the US, the Syrian military and its allies were able to quickly deliver a cascade of defeats to the mercenary terrorists.

Another False Accuser Put Away For 5 Years

Raging Golden Eagle: The only downside is it took them a while to lock this one up, and she was able to wage a sustained campaign against her victim before the cops finally did anything. But at least they are FINALLY starting to do something!

The Silence Of The Males

By Kathy Gyngell: Ever since the outing of serial sexual attacker Harvey Weinstein, men have been on public trial. They have been subjected to an across-the-board character assassination. Innocent until proved guilty in the law maybe, but in the trial by media that’s followed they’ve been presumed guilty without recourse to due process.

One man is dead. Several other men’s reputations, family lives and perhaps their careers too have been irretrievably damaged.
Yet the bullying continues. Women commentators, instead of re-directing women to the law to pursue their grievances, continue to encourage the media witch-hunt,  the viciousness of its tone scaling up, not down the while: 'Almost every day', Nesrene Malik wrote, 'there is a man’s sneering, hovering head sitting on top of a few hundred words of what is really no less than the sort of existential hysteria of an animal whose cosy ecosystem has been disturbed.’
If such derogatory commentary is anything to go by, Carl Sargeant’s death is not proving the watershed moment some of us hoped for. In what appears to be a cop-out, Labour now says its investigation into allegations that led to Mr Sargeant’s death can’t continue. If the police don't take it up his reputation will  have died with him.

Read more »
Posted by Angelo Agathangelou at 9:51 am No comments: Links to this post

Gary Orsum:
Once upon a time...
Posted by Angelo Agathangelou at 7:38 am No comments: Links to this post 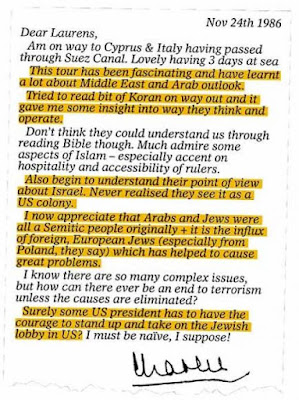 By Tyler Durden: Prince Charles has sparked lame-stream media outrage following a report he wrote an honest letter blaming "the influx of foreign, European Jews" for aggravating the Arab-Israeli conflict and leading to general unrest in the Middle East, while also asking whether an American president would "have the courage" to take on "the Jewish lobby" to put an end to terrorism in the region.
The note, written on November 24, 1986, was found in a public archive and published Saturday by the Daily Mail. The Prince penned the letter after official visits to Saudi Arabia, Bahrain and Qatar with Princess Diana.
"I now appreciate that Arabs and Jews were all a Semitic people originally,” the then 38-year-old Prince of Wales wrote in his letter, adding, that “it is the influx of foreign, European Jews (especially from Poland, they say) which has helped to cause great problems” in the Middle East. “I know there are so many complex issues, but how can there ever be an end to terrorism unless the causes are eliminated?” he questioned.

Read more »
Posted by Angelo Agathangelou at 4:36 am No comments: Links to this post