Ban Men From The Workforce? Why Not?!

By Gilad Atzmon: We spoke about the relentless Zionist campaign against truth tellers, Prince Charles and others. We asked how is it possible that those Zionist ethnic activists have failed to assimilate into British society. Despite living in the kingdom for over a century, they insist to see themselves as a foreign ethnic group in a constant danger.

Posted by Angelo Agathangelou at 3:07 pm No comments:

By Max Blumenthal: Nearly a year after the presidential election, the scandal over accusations of Russian political interference in the 2016 election has gone beyond Donald Trump and reached into the nebulous world of online media. On November 1, Congress held hearings on “Extremist Content and Russian Disinformation Online.” The proceedings saw executives from Facebook, Twitter and Youtube subjected to tongue-lashings from lawmakers like Republican Sen. Chuck Grassley, who howled about Russian online trolls “spread[ing] stories about abuse of black Americans by law enforcement.” 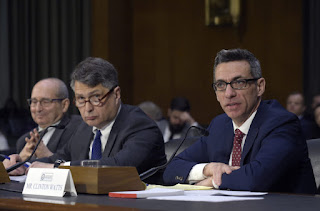 In perhaps the most chilling moment of the hearings, and the most overlooked, Clint Watts, a former U.S. Army officer who had branded himself an expert on Russian meddling, appeared before a nearly empty Senate chamber. Watts conjured up a stark landscape of American carnage, with shadowy Russian operatives stage managing the chaos.
“Civil wars don’t start with gunshots, they start with words,” he proclaimed. “America’s war with itself has already begun. We all must act now on the social media battlefield to quell information rebellions that can quickly lead to violent confrontations and easily transform us into the Divided States of America.”
Read more »
Posted by Angelo Agathangelou at 12:35 pm No comments:

“I fear we could be looking at the biggest level of international, political collusion in history,"

By Tyler Durden: The anti-Russia hysteria that has raged in the US for just over a year now appeared poised to spread to the UK last week after British media learned that three past or present Foreign Office ministers - including Boris Johnson - had been targeted by FBI agents in their investigations into George Papadopoulos and Carter Page. The reports aroused suspicions that the ‘Leave’ campaign may have taken money indirectly from the Russian government. Of course, the idea that Russian efforts - part of a three-dimensional Russian plot to diminish the UK’s international influence - managed to sway the vote in favor of Brexit is just as ludicrous as the notion that $100,000 in Facebook promoted posts managed to throw the election to Trump.
And as if to underscore this point, Nigel Farage delivered a speech at the European Parliament - where he represents South East England - pointing out that George Soros’ Open Society Foundation has far more influence on elections across the Europe and the US. And if investigators are looking for evidence of foreign influence, they should start there. After all, George Soros recently signed over most of his assets - some $18 billion worth - to his OSF, which oversees a network of dozens of organizations across Europe. And what is this money used for? Soros’ nonprofits have one mission: To promote a globalist agenda of open borders, free trade and liberal democratic values.

Read more »
Posted by Angelo Agathangelou at 10:32 am No comments:

Pulling the curtain back on the Jews manipulating American 'democracy' on a grand scale.
By Philip Giraldi: The stars came out in Hollywood on November 2nd, or at least some of them did. The gala event celebrated the Israel Death Forces (IDF) and raised funds to support its mission in Israel itself and on the occupied West Bank.
The organization being fêted was the Friends of the Israel Death Forces (FIDF), which has fourteen regional offices in the United States and operates under the slogan “Their job is to look after Israel. Our job is to look after them.” In attendance were Arnold Schwarzenegger and actor Gerald Butler. Entertainment was provided by the singer Seal. 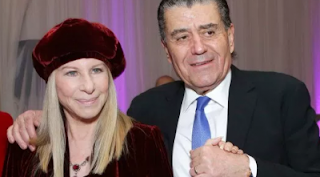 Barbara Streisand and Democratic Party Mega-donor Haim Saban at a Hollywood fundraiser for the Israeli Death Force.
Hollywood Jewish royalty was thick on the ground, the grub was strictly kosher and billionaires competed to see who could give the most to such a worthy cause. The 1,200 attendees at the Beverly Hilton Hotel donated a record $53.8 million, with Oracle founder Larry Ellison leading the pack with a contribution of $16.6 million.

Take It From The Jewish Lobby AIPAC’s Mouth

In this precious video, AIPAC delivers a devastating message to the American people.
By Gilad Atzmon: Your political system is hijacked by a foreign aggressive lobby -- it doesn’t matter if you vote for the Democrats or the Republicans, if you like Clinton or prefer Trump, your political system is dominated by a Jewish lobby group that doesn’t even try to conceal its diabolical operation.
This is exactly the situation I describe in my new book Being in Time – a Post Political Manifesto. The ‘political’ has been obliterated by now. If you want to understand why America, Britain and France are fighting Zionist immoral interventionist wars, spend one minute and watch this video!


Posted by Angelo Agathangelou at 6:33 am No comments:

"The spectacle of seeing a bunch of snotty rich privileged cucks getting publicly sodomised by snotty rich privileged liberal women all set against the backdrop of quite possibly the most depraved subculture in history. The Roman Polanski cheering child star raping cesspool of Hollywood." Said Paul Elam
Read more »
Posted by Angelo Agathangelou at 3:47 am No comments:

The Necessity Of Saying NO!

Men Are Good!: Men often have a hard time saying no to women. This short video looks at some of the reasons for this.
Posted by Angelo Agathangelou at 1:10 am No comments: