Max and Stacy discuss democracy – not dying in darkness, but stolen in broad daylight and auctioned off to the most powerful bidder. And, as Jeff Bezos passes the $100 billion net worth landmark, some parts of America see the return of hookworm – a disease of extreme poverty.

LOGIC
Posted by Angelo Agathangelou at 7:44 pm No comments:

The World Versus The Jewish State & Zio-Super-Shill Trump

"Irresponsible, Unwarranted": Saudis Condemn Trump's Jerusalem Recognition, Warn Of "Serious Consequences"
By Tyler Durden: Saudi Arabia has issued a formal condemnation of President Trump's recognition of Jerusalem as the Israeli capital and announcement of plans to relocate the US embassy from Tel Aviv to 'the holy city' claimed by both Palestinians and Israelis. The Saudi statement was posted to its D.C. embassy website and circulated via diplomatic channels and the kingdom's social media accounts Wednesday evening. 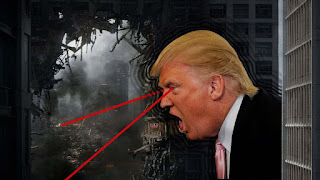 The kingdom's condemnation invokes "serious consequences of such an irresponsible and unwarranted step" while expressing its "denunciation and deep regret that the administration has taken this step" while calling on the White House to "reverse this action" which constitutes "a drastic regression in the efforts to move the peace process forward."
As expected Trump has already received an immense amount of international push back from world leaders, including major US allies. Among the many countries and international bodies which immediately condemned the move are  The United Kingdom, France, Germany, Canada, Russia, China, Turkey, Saudi Arabia, Qatar, UAE, Egypt, Jordan, as well as The Arab League and The European Union.

Read more »
Posted by Angelo Agathangelou at 6:03 pm No comments: 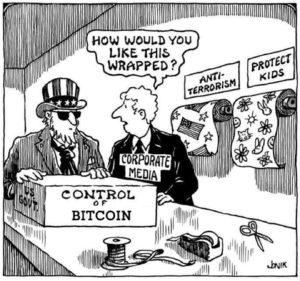 By Michael Krieger: The financial crisis of 2008/09 was the most significant event to happen in my lifetime. That episode, coupled with the deeply unethical and corrupt response to it, led to a direct delegitimization of governments and institutions worldwide. It’s precisely this self-inflicted destruction of credibility which opened up the window for the birthing of a new monetary and financial system in the wake of Bitcoin’s emergence in early 2009.
Bitcoin is a system designed to be everything the status quo isn’t. Decentralized, transparent, permissionless, with a well-defined and restricted monetary supply curve. Given the backdrop upon which it emerged, it’s unsurprising that as more time passes, the more popular it becomes.
Humanity is desperate for a major reboot and an entirely different way of doing things. Bitcoin and other crypto assets offer exactly that opportunity in the realm of finance and money, thus capturing the imagination of millions of the most brilliant and passionate people around the world. Since the status quo stubbornly refused to reform and change the system after the financial crisis, humanity had no choice but to take charge and do it independently at the grassroots level.

Read more »
Posted by Angelo Agathangelou at 4:12 pm No comments:

'This is orwell's nightmare with LDS
and methamphetamines added.'

johntheother: Rape Shelters in Ontario (and Calgary) are now participating in a pilot project to conduct their own police-style investigations into sex-assault and domectic violence accusations that the police have determined dont merit charges. The goal, apparently, is to increase the number of charges laid ( by using a lower standard of proof than the police ) So gentlemen, civilians working for feminist grievance orgs now have a mandate and funding to run an off-book private police force, not governed by the Canadian Courts, or by the Police Services Act of Ontario. If you needed another reason to go monk-mode, here it is. http://www.cbc.ca/news/canada/ottawa/...

Read more »
Posted by Angelo Agathangelou at 1:40 pm No comments: 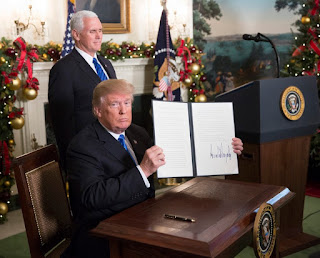 Donald Trump signs an executive order
declaring Jerusalem the capital of Israel
at the White House on 6 December
By Omar Karmi: He may have small hands, but US President Donald Trump appears to have a big foot. And with his decision to recognize Jerusalem as the capital of Israel, he has shoved it squarely up the part of conventional international Middle East peacemaking diplomacy that never sees the sun.
So far, so good, you might think. Decades of international peacemaking efforts have, after all, failed, as Trump said in his statement, to make peace. What he didn’t add, though, is that it has also largely provided cover for Israel to continue its colonization of occupied territory. And nowhere has Israel done so more egregiously than in Jerusalem itself.

Read more »
Posted by Angelo Agathangelou at 9:34 am No comments:

Retired CIA officer, Ray McGovern speaks about the intelligence community’s habit of disseminating faulty intelligence for the benefit of the war machine.  McGovern co-founded a group called Veterans Intelligence Professionals for Sanity (VIPS), which fights to bring people the truth, especially when it comes counter to government lies or the media’s propaganda machine.
Posted by Angelo Agathangelou at 5:26 am No comments:

By Author Douglas Galbi: Today’s intellectual leaders, both women and men, are like Fadia, an official in a French library:
Fadia. She is a desperate case. … I watched her leave the office and shook my head. I suspect she would be capable of taming even the fiercest erection. It’s clear that she hasn’t learned a thing. She’s at war with her body and with men’s bodies as well. It looks like it’ll be a long war. [1] 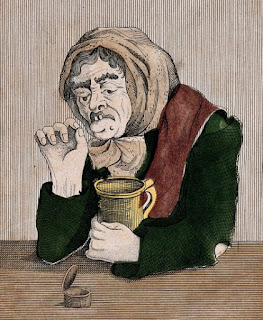 Plutocrats such as Melinda Gates are spearheading this bitter world-wide gender war. They are pygmies digging holes under the feet of intellectual giants such as the ancient Indian scholar al-Alfiya.
Al-Alfiya’s wisdom has been transmitted through the centuries in Persian and Arabic literature. Her name itself highlights one of her credentials:
this woman came to us through Indian erotica, and she became a legend passed on by the Arabs, essentially the men, with a certain degree of fear, envy, and admiration.

Read more »
Posted by Angelo Agathangelou at 3:09 am No comments:

The FKN Newz
Deek Jackson
Posted by Angelo Agathangelou at 12:06 am No comments: