What Does A Man Bring To The Table?


"Some penis and a pay cheque."

Read more »
Posted by Angelo Agathangelou at 10:54 pm No comments:

The Feminist Threat To Women And Men

'Feminism is complicit in the destruction both of the status of women and of Western society.'
By Dr. Paul Craig Roberts: Recently I read in CounterPunch two feminist rants against men. Not all men, just white heterosexual men. It is not always easy for a male of my generation to understand what feminists are saying, but I try. One seems to be saying that women live in a society that puts in power men who believe that violence against women is acceptable. Elevating her accusation to a fact, the writer says that women should not have to prove their case when they bring sexual harassment and assault charges, much less prove their “personal validity to even be making a case against a man.” 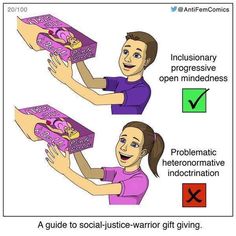 Is the writer saying that any irate woman should have the right to inpugn a man with an unchallenged charge? Do men and American society believe that violence against women is acceptable? I think not, unless the violence is committed by police. Americans seem to accept police violence against men, women, children, the handicapped, and the family dog.
The other writer says women have to sell themselves to live. She, despite a degree from a prestigeous university, went to work as a stripper, lap dancer, and apparently as a prostitute. She blames men for her poor decisions.

Read more »
Posted by Angelo Agathangelou at 4:55 pm No comments:

Going Your Own Way In The Workplace

Independent Man
Posted by Angelo Agathangelou at 12:02 pm No comments:

By Gilad Atzmon: For the last several years I have repeatedly pointed out that when it comes to Palestine, the discourse of the oppressed is shaped by the sensitivities of the oppressor.  No one demonstrates this thought process better than German Jewish activist Elias Davidsson. The tribal operator ended his slanderous article about me in the German New Left Rubikon magazine:  “As a longtime anti-Zionist, I will not allow our fight for a just peace in Palestine to be disintegrated by psychopathic anti-Semites, nor will I regard people as comrades spreading the horrible theories of a Jewish world conspiracy. This theory has already resulted in millions of bodies.”
Ask yourself who comprises ‘our’ what ‘fight’ he is referring to. Indeed, I have never accused the Jews of a conspiracy. I argue, as forcefully as I can,  that there are NO Jewish conspiracies. Self–identified Jews don’t hide a thing, they act in the open.  Jewish Power, accordingly, is the power to silence criticism of Jewish power. This is exactly what Davidsson is attempting to do. And so he implements the Hasbara guidebook.
Elias Davidsson is an elder wannabe musician.  I suppose that in the last few years he has been unable to restrain his envy. His vicious attacks on yours truly have provided him his moment of fame in his waning years.
Until 2011 Davidsson regularly begged me to publish his unreadable rants. They were never up to standard and I rejected most of them. In 2011 I did publish a piece by Elias Davidsson in which the boy declared himself a “radical anti-Semite.’

Read more »
Posted by Angelo Agathangelou at 7:13 am No comments:

Why Did You Start The First Women's Shelter? Part 2 - Erin Pizzey

Cassie Jaye: The Red Pill: Raw Files consists of never-before-seen footage from the making of The Red Pill documentary. This footage is being released for educational purposes, to inspire discussion and debate on gender issues.
Posted by Angelo Agathangelou at 4:11 am No comments:

Surveillance Is Not About Fighting Terrorism

Intelligence Community Says US Had Better Reauthorize Surveillance… Or Else
By Caitlin Johnstone: The editorial board of the Washington Post, whose sole owner is a CIA contractor, has published a predictably fact-challenged op-ed arguing that congress must reauthorize the Orwellian surveillance program known as Section 702 of the Foreign Intelligence Surveillance Act, which is deliberately used to collect communications of US citizens. 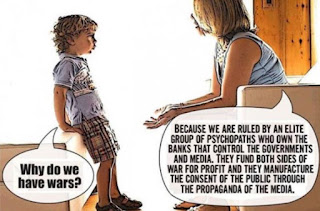 'America is ruled by a band of unelected, unaccountable thugs who will kill and terrorize in order to shore up power and advance agendas'
Read more »
Posted by Angelo Agathangelou at 1:36 am No comments: