Making Ends Meet In An Apartheid Gulag - The Jewish State

'Gaza stands on the brink of full-blown humanitarian disaster'
By Amjad Ayman Yaghi: One morning in late January, Nabil al-Duhadar, 45, got up before 6 for dawn prayers and then immediately set to work.
Al-Duhadar is a street vendor who sells turmos – a lupin bean snack often sold in market stalls. The snack takes preparation: the beans are soaked over 24 hours before being cooked for a couple of hours and then seasoned with salt and cumin and drizzled with lemon. It’s cheap, healthy and portable and an ideal product for street vendors for whom mobility is important. 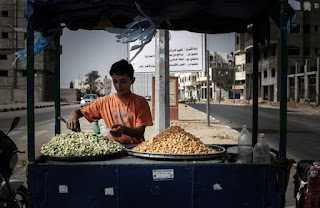 A Palestinian boy sells lupin beans in the Jewish State open air prison known as Gaza.
Mobility allows al-Duhadar the luxury of chasing his custom. And on this particular January morning, the custom was there to be chased. A demonstration had been called to protest the US decision to cut funding for the UN’s Relief and Works Agency, UNRWA, that caters to the needs for Palestinian refugees.
The decision will have disastrous results for the Gaza Strip where 1.3 out of 2 million Palestinians are registered refugees and some one million people rely on UNRWA for food aid and other basic necessities.
But for street vendors like al-Duhadar, the many demonstrations in Gaza that have been called in protest have at least provided them with the kind of large gatherings that are good for business.
“Demonstrations help me earn more,” said al-Duhadar, a father of six children aged from 3 to 16. During that particular January protest, he told The Electronic Intifada, he earned three times what he would normally make.

Al-Duhadar used be a metal worker. But the Israeli-imposed blockade on Gaza, now in its 11th year, put an end to such paid work, since much metal is listed on Israel’s extensive “dual-use” products that are banned from entry.
And while he sees the irony that demonstrations against the very siege and sanctions that cost him his livelihood are now seen as business opportunities, he has to pay rent of $150 every month. All other considerations are a luxury.
“This harsh situation leaves me no choice. I have to support my family.”
Street vendors like al-Duhadar keep a close eye on the news, but they also pass information among each other.
“All of us get some relief when there are demonstrations,” said Muaman Abu Mustafa, 39, a father of five who runs a cart with hot and cold drinks. Despite their need for money, there is no rivalry among street vendors or territoriality around demonstrations, Abu Mustafa, who used to work as a tailor in one of Gaza’s now-shuttered textile factories, said.
“There is little work here and we are all trying to support our families and live with some dignity. Demonstrations help us earn more.”
Certainly, Gaza stands on the brink of full-blown humanitarian disaster. Unemployment tops 46 percent, with more than 60 percent of those in the 15-29 age group going without work. With precious little progress in rebuilding Gaza’s devastated infrastructure or homes destroyed in three destructive Israeli offensives since 2008, an easing of the blockade is the only slim hope to avoid a full-blown humanitarian crisis that has long been forewarned.

The trade has also attracted the very young. Worsening economic conditions have resulted in alarming levels of child labor.
The number of children between the ages of 10 and 17 working in Gaza doubled to 9,700 between 2011 and 2016, according to the Palestinian Central Bureau of Statistics.
More than a third of those working children were below the employment age of 15.
Some economists in Gaza think the actual number of underage laborers could be twice as high.
Many children seem to work as street vendors. Ahmad al-Banna, 10, was selling flags from his cart during a January demonstration against US President Donald Trump’s decision to recognize Jerusalem as the capital of Israel. He buys the flags – some carrying the colors of the various Palestinian factions as well as the national flag – wholesale. During the Jerusalem demonstration he sold 40, he said, earning some $15.
“I sell small flags to children who come with their parents,” Ahmad, who is in fifth grade, told The Electronic Intifada. And the money he makes, he said, was important to his family.
“We’re nine people. My father doesn’t work. He was injured in the war in 2012,” Ahmad said.
The street vending is a sideline. Ahmad also works every day after school at a market in Shujaiya in Gaza City. But he only takes home $6 a day, he said, and prefers to work demonstrations with his cart.
Muaman Qishta is also 10 and like Ahmad in fifth grade. He and his older brother, Ahmad, 15, both work the streets to help support their three other siblings.
Muaman sells caramel glazed apples and has been doing it long enough to know “good” demonstrations from bad ones.
“Sometimes organizers keep me away,” Muaman told The Electronic Intifada. It annoys him, he said. A demonstration – Muaman keeps a close eye on banners that he is proud to say he can read to learn news of upcoming protests – can net him $12 a day. That’s much better than normal days.
“When I am allowed in, I can sell. Then I go home happy with money for my family.”

Amjad Ayman Yaghi is a journalist based in Gaza.

Posted by Angelo Agathangelou at 12:56 pm