Haley: ‘Russia Will Never Be Our Friend, We’ll Slap Them'

Ladies and gentlemen, we give you
the US envoy to the United Nations 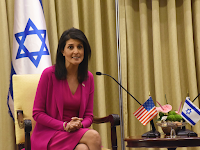 RT: Nikki Haley has erupted in another fiery Russophobic rant, warning that Russia will “never be America’s friend.” Moscow can try to behave “like a regular country,” but the US will “slap them when we need to,” Haley said.
The US ambassador to the UN is not known for her friendly stance toward Moscow, but her new take on US-Russia relations stands out among even her most rabid ramblings. Speaking at Duke University in North Carolina on Friday, Haley admitted that friendly relations with Russia is an unlikely prospect, adding that the Trump team has done more against Moscow than any other administration since Ronald Reagan’s tenure.
“Russia’s never going to be our friend,” Haley told students at a Q&A session, responding to a question about “holding Russia accountable” for alleged meddling in the 2016 presidential election. The diplomat said Washington still works with Moscow “when we need to, and we slap them when we need to.”
She then raised the stakes further: “Everybody likes to listen to the words. I’m going to tell you – look at the actions,” Haley urged. “We expelled 60 Russian diplomats/spies, we have armed Ukraine so that they can defend themselves,” she added.
According to the UN envoy, the US is doing “two things Russia would never want us to do,” namely enlarging the military and expanding its energy policy. “So, this president has done more against Russia than any president since Reagan,” she asserted.
“You haven’t seen the end of what this administration will do to Russia. You will continue to see that play out,” she stressed.
Cooling down the degree of Russia-bashing in her speech, Haley said the US and Russia do cooperate on Afghanistan and Africa, looking out for areas of mutual interest. Meanwhile, she claimed, “our relations with Russia depend solely on Russia.”
However, the Russian leadership can make life easier “if they decide to be a good actor and deal in the international community like regular countries,” the ambassador noted, adding that “they will see more countries want to work with them.”
The topic of Russia-bashing and Moscow’s alleged interference in US democratic processes seems far away from dwindling, despite no solid evidence being presented so far to the public. Moscow has repeatedly brushed off the claims. “Until we see facts, everything else will be just blather,” Foreign Minister Sergey Lavrov said in Munich last month.
However, there could be signs of improvement on the horizon. Donald Trump has recently suggested meeting Russian leader Vladimir Putin in Washington, DC. In March, he said the two leaders “will be meeting in the not too distant future to discuss the arms race which is getting out of control.” Putin and Trump have so far met twice.
The first meeting occurred during the G20 summit in Germany last July, and the second took place on the sidelines of the Asia-Pacific Economic Cooperation summit in Vietnam in November. President Putin, as well as several Russian officials, has continuously signaled Moscow's readiness to improve ties with the US and the West, based on trust and respect.

Russia: The Spurned Lover Who Persists

By Dr. Paul Craig Roberts: Is the Russian Foreign Ministry so brainwashed that it believes the US is a democracy?! https://www.rt.com/news/423439-russia-sanctions-response-foreign-ministry/ A country in which 90%, if not more, of the people are dispossessed is a democracy?! A country ruled by a handful of private interest groups is a democracy?! The success of Washington’s propaganda is extraordinary. Even the Russian government believes it.
Does the Russian Foreign Ministry not understand that the always delayed, always weak, and always complaining Russian response to the latest provocation from Washington simply convinces Washington that Russia is so desperate to be accepted as part of the West that the Russian government will put up with every insult?
All the Russian government has achieved is to convince Washington that the Atlanticist Integrationists in the Russian elite will sell out Russian sovereignty in order to be part of the West. This is why Washington’s provocations, every more absurd and insulting, keep coming. Raise the pressure on the Western-infatuated Atlanticist Integrationists, and they will move Putin aside. This is Washington’s strategy, a strategy vindicated by the Russian government’s lack of a meaningful response.
Is there no one in the Russian leadership who realizes that Russia must ignore the provocations, completely disengage from the West, and turn her attention to where the world is rising, which is in the East, not in the West, which is falling apart?
The Russian love affair with the West is truly amazing. The spurned lover, turned away again, again, and yet again, still persists. The US Ambassador to the United Nations can tell the assembled body that “Russia will never be America’s friend” and that America will “slap them [Russia] when we need to,” and RT sees in these hostile, contemptous statements hope for improvement in US-Russian relations. https://www.rt.com/usa/423422-us-russia-stalemate-haley/
God help Russia.


Posted by Angelo Agathangelou at 3:10 pm