The Road To 2025 - Prepare For A Multi-Polar World

'The man on the street’s thrown in jail for the smallest offense, while financiers who destroyed the global economy with fraud retire comfortably to their mansions.'
By Michael Krieger: If pressed to describe what I think the next several years will look like as concisely as possible, I’d simply provide the following quote, often misattributed to Lenin: 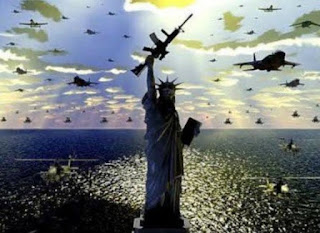 “There are decades where nothing happens; and there are weeks where decades happen.”
There will be many such weeks from now until 2025, with the end result an emergence of a multi-polar world that will permanently unseat the unipolar U.S. imperial paradigm.
Since World War 2, the U.S. has successfully sustained a position of global dominance unlike anything the world’s ever seen. Virtually each and every corner of the planet has been subject to inescapable and overwhelming American influence, both culturally and economically. This root of this power didn’t just emerge from GDP strength and the USD, but from Hollywood, popular music and tv shows. The impact of the U.S. empire on the planet over the past 70 years has been extraordinary but, like all things, it too shall pass. I believe this end will be realized by around 2025.
When I say this sort of stuff people think I’m calling for the end of the world. I suppose that’s what it may feel like to many, because a paradigm change of this magnitude will indeed have monumental global implications. Yet the world will go on, it’ll just be very different place. That said, Americans should not see this as an apocalyptic thing. It’s not healthy or sustainable for one nation to dominate the planet in such a manner. Many of us like to think that a benevolent global empire led by philosopher kings is just fine, but the problem is this is utter fantasy. What happens in real life, to quote Lord Acton, is  that “power corrupts and absolute power corrupts absolutely.”
This is precisely what’s happened in the U.S. The country’s been looted and pillaged with rapacious fervor in recent decades while a unaccountable class of people I refer to as top-tier predators operate at will with total impunity. The man on the street’s thrown in jail for the smallest offense, while financiers who destroyed the global economy with fraud retire comfortably to their mansions. The U.S. empire no longer benefits the average American, but instead systematically funnels all the spoils to a smaller and smaller segment of the population. Most of the world already sees it, and the average U.S. citizen is starting to see it as well. This is not good for the establishment.
This is also why the U.S. status quo constantly lies to the public with its nonsense narrative that U.S. military action overseas is based on humanitarian concerns and a desire to spread democracy. Nothing could be further from the truth. In fact, all significant U.S. military action overseas is driven by money and power. Humanitarian concerns play zero role. Not even a small role, zero.
Caitlin Johnstone recently summarized what’s going with geopolitics perfectly with the following paragraph:

The mass media narrative factory tries to make it about chemical weapons, about election meddling, about poisoned ex-spies, about humanitarian issues, but it has only ever been about expanding the power and influence of the oligarchs and allied intelligence/defense agencies which run the western empire. All the hostilities that we are seeing are nothing other than an extremely powerful conglomeration of forces poking and prodding noncompliant governments to coerce them into compliance before global power restructures itself into a multipolar world.

The biggest problem for the U.S. establishment right now is people are no longer buying the narrative. They certainly aren’t buying it overseas, and even here in America, U.S. citizens are finally starting to see the “humanitarian bombings” for the shams they are. It’d be one thing if your average American was benefiting from U.S. empire, but they aren’t. Rather, the spoils are all going to a small handful of people from the top tier predator class, while life for tens of millions is characterized by dilapidated infrastructure, a completely broken healthcare system, continued unaccountable Wall Street looting, a decimation of of civil liberties, and an overall precarious economic existence that seems modeled off of the Hunger Games.
The only people who don’t see how dysfunctional the U.S. empire is are the people running it. The U.S. establishment, which consists of a diverse assortment of elites from Wall Street, American intelligence agencies, mass media, Congress, the Federal Reserve, the military-industrial complex, etc., disagree on many things, but one thing they agree on completely is the U.S. empire — that it should not only be preserved, but expanded. The major problem for them is this isn’t 1995 anymore, they just haven’t got the memo yet.
The U.S. establishment is either too busy making boatloads of money or playing keyboard warrior with other people’s lives to acknowledge what’s happening both here and abroad. A disconnected, greedy and unaccountable elite class filled with hubris and an insatiable hunger for power is a core ingredient in any imperial collapse, and this exists in America in droves at the moment. A reckoning is coming.
Today’s piece focused on how the U.S. empire is no longer working for the average American citizen. Part 2 will focus on why it’s not working for the rest of the world either.

Posted by Angelo Agathangelou at 10:15 pm