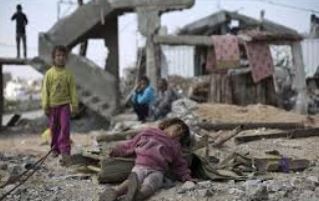 By George Capaccio:  In the Gospels, the disciples of Jesus complain about folks who bring their kids with them to receive his blessings. But Jesus is not somebody who shuns the company of children. In response to his followers’ disapproval, he says, perhaps with the snap of indignation in his voice, “Suffer the little children and don’t stop them from coming to me. For the kingdom of Heaven was made for such as these.” (Or words to that effect.)
Thank God people here and around the world are righteously outraged by the Trump Administration’s most recent descent into fascistic horror—separating children from their parents at the US-Mexican border and dispatching them to detention centers with no assurance they will ever be reunited with their families. A perfect example of cruel and unusual punishment for the sin of seeking asylum from the very violence and chaos the US had no small role in instigating in Central American countries.
I don’t know which is worse: ripping apart immigrant families and imprisoning even little children or enabling the Saudi-led coalition to attack and possibly destroy Yemen’s sole remaining lifeline—the port of Hodeidah—despite the imminent threat of starvation hanging over the heads of Yemen’s civilian population.
The children as in most conflict zones bear the brunt of suffering in this three-year-old war between Yemen’s Houthi rebels (officially known as Ansar Allah) on the one hand, and the coalition and Yemeni government on the other. As anyone following this story is aware, we are providing intelligence and targeting logistics, and mid-air refueling of Saudi and United Arab Emirates fighter jets. For good measure, the Trump Administration in April authorized the sale of 1.3 billon dollars worth of weaponry to Saudi Arabia in order to “improve Saudi Arabia’s capability to meet current and future threats and provide greater security for its border regions and critical infrastructure,” according to Pentagon officials. The weapons include “100 155 mm M109 Howitzers, 180 .50-caliber M2 heavy machine guns, eight Advanced Field Artillery Tactical Data Systems. …” Between 2011 and 2015, Saudi Arabia purchased 9.5% of US arms exports.


What a bonanza of killing machines for Saudi Deputy Crown Prince and Defense Minister Mohammed bin Salman, who met with Trump during the former’s so-called “goodwill tour” of the US earlier this year. Never one to miss an opportunity to display his concern for American workers, Trump duly noted that “A lot of people are at work” thanks to Saudi Arabia’s purchase of “the finest military equipment anywhere in the world.” The “people” of course are the defense contractors who, as always, stand to reap enormous profits from the business of killing.

In Yemen the “business of killing” has been amped up by the influx of US weapons and US support of the Saudi onslaught. Though all sides in the conflict have committed war crimes and human rights violations, the US and its European allies, including Spain, Italy, France, and UK, are complicit in the continuation and intensification of the war. The bombing of civilian and military targets, and the Saudi-led coalition’s severe restrictions on the delivery of food, fuel, and medical supplies have resulted in inconceivable suffering for the Yemeni people. The UN calls it the worlds’ worst humanitarian crisis. And driving it are the geopolitical calculations of the world’s foremost superpower for whom safeguarding its relationship with Saudi Arabia trumps any humanitarian concerns. After all, Saudi Arabia may be the biggest and wealthiest funder of terrorist groups in the Middle East. But it’s also a major player in the politics of oil. “Protecting Saudi Arabia and other Persian Gulf producers has been a cornerstone of U.S. foreign policy for decades,” according to the Council on Foreign Relations.

So the killing continues. And the children of Yemen, like the children of Iraq, Syria, and Afghanistan are paying the price of imperialist realpolitick, for which ethical, moral, or simple humanitarian considerations are more often considered obstacles to the application of force and military muscle to resolve international disputes. As a witness to the effects of sanctions on Iraq’s economy, I have seen the withered bodies of little children suffering from extreme malnutrition and water-borne diseases. Most of them had scant chance of surviving in hospitals that once possessed first-rate medical equipment and sufficient resources to deal with pediatric illness, including various forms of cancer. The fate of these children was the consequence of decisions made in Washington in its drive to force regime change in Iraq by depressing the country’s economy and causing a profound humanitarian crisis.

It appears that nothing has changed, at least in the manner in which the US wields power and enforces its own brand of political expedience absent any concern for commonly accepted standards of right and wrong. From the standpoint of Donald Trump and his toadies, it makes perfect sense to lock up little children after taking them away from their parents and to ignore or at least discount the generational trauma and suffering this policy is causing. In the same vein, providing logistical and diplomatic support for Saudi Arabia’s war against the Houthi fighters of Yemen (whom the Saudis consider proxies of its arch foe—Iran). And of course, to stem Iran’s growing influence in the Middle East, the people of Yemen are expendable in the eyes of the US, Britain, and other arms suppliers in Europe, and countries in the Gulf and Africa allied with Saudi Arabia.

When I look at photographs taken in Yemen’s hospitals of children suffering from malnutrition and what would normally be easily treatable diseases, my heart recoils. The sight of these emaciated children takes me back to pediatric wards in Iraq during the period of economic sanctions. This is what inhumanity looks like. This is what it means to deliberately prevent children from receiving all the blessings of life to which they are entitled simply by having been born. These children, whether the offspring of parents in Yemen or of parents from Central American countries, deserve to be embraced, to be loved, to be treated with all the compassion and kindness the human heart is capable of giving.

In Yemen, the statistics tell a heartbreaking story. A recent report from Oxfam International Yemen’s focuses on the humanitarian crisis caused by the ongoing conflict:

The fighting has “massively” disrupted Yemen’s food supply, of which 90% was imported even before the war began. Because of attacks on essential civilian infrastructure, the country is barely able to provide basic services like health care and a reliable supply of potable water, thanks in part to US support.

Since the implementation of Trump’s “zero tolerance” regarding immigrants and asylum seekers crossing our southern border with Mexico, a growing number of Americans have been moved to publicly protest this policy and to call for its repeal in the name of fairness, justice, and fundamental human decency. In a recent Tweet, Ralph Nader, a quintessential guiding light in matters concerning civic virtue, responds to former First Ladies’ criticism of “zero tolerance”:

Would be nice if Laura Bush and Michelle Obama had expressed similar heartfelt concern for the tens of thousands of children killed or seriously maimed by the wars of their husbands in Iraq, Afghanistan and elsewhere.

Wouldn’t it also be nice if Laura and Michelle opened their hearts to the children of Yemen and called for an end to all arms sales to Saudi Arabia, a negotiated settlement to the conflict, and a trial by the International Criminal Court for the perpetrators of war crimes and crimes against humanity in Yemen. Personally, I don’t expect the spouses of lawbreakers like George Bush and Barack Obama to raise much of a stink about the crimes their husbands committed while in office. But I do hope that well-meaning American citizens, deeply disturbed by the unnecessary suffering inflicted on parents and children from Central America, begin to connect the dots. To my mind, the humanitarian crisis on our border with Mexico and the humanitarian crisis in Yemen may not be one in the same. But both are expressions of an identical absence of compassion and a willingness to deny the humanity of those deemed “different” for one reason or another.

Thinking about the history of this country, I imagine a long “trail of tears” beginning with our Puritan forebears and their wars against native people, extending through centuries of slavery, the American Indian wars of the 1800s, the forced displacement of Eastern Woodland Indians from their traditional homelands in the Southeast to the so-called “Indian Territory” west of the Mississippi, the Philippine-American war (1899-1902), the world wars of the 20th century right up to our present attacks against predominantly Muslim nations and the denial of human rights to the people seeking refuge in our country.

Suffer the little children. Let them live. Give them food, clothing, shelter. Give them love. Not bombs and bullets. Not the cruelty of sanctions. Not the grim prospect of war without end.

George Capaccio is a writer and activist living in Arlington, MA. During the years of U.S.- and UK-enforced sanctions against Iraq, he traveled there numerous times, bringing in banned items, befriending families in Baghdad, and deepening his understanding of how the sanctions were impacting civilians. His email is Capaccio.G@gmail.com He welcomes comments and invites readers to visit his website: www.georgecapaccio.com


During the decade of the1830s, the federal government forced the removal of Eastern Woodlands Indians from their traditional homelands in the Southeast region of the U.S. An estimated 100,000 indigenous people, including Cherokee, Choctaw, and Creek, were compelled to walk thousands of miles to so-called Indian Territory west of the Mississippi River. About 15,000 people died from disease, exposure, or starvation. The collective suffering of those who made the journey west or died along the way is known as the Trail of Tears.