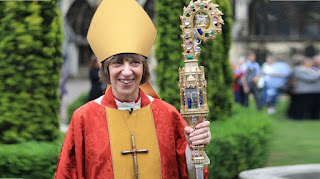 By Jules Gomes: Rachel Treweek, Bishop of Gloucester, is a über-feminist. On Sunday, she called for the God of the Bible to undergo Gender Reassignment Surgery. “I don’t want young girls or young boys to hear us constantly refer to God as he,” she told The Telegraph.
Jesus, the Son of God, called God his Father. Treweek grew up praying the Lord’s Prayer and calling God “Our Father”. But now, as the most senior female bishop in the Church of England and a member of the House of Lords, our Rachel has inside information that God wishes to transition to a non-gendered being.
The “mind your language” bishop, oddly enough, hasn’t yet objected to the masculine nomenclature of the House of “Lords” or to the masculine form of “bishop” – she threw her mitre at me after I called her a “bishopess”. Of course, she believes bubble-gum popping tweens and teens will come flooding into the Church of England if we stopped calling God by his preferred choice of pronoun.
Once Treweek gets rids of God the Father’s toxic masculinity, her next project will be to persuade God the Son to put his name on the NHS waiting list for Hormone Therapy. Jesus can have a second incarnation as a woman and Treweek can re-brand Jesus Christ as Jessie Christa.
“I am very hot about saying can we always look at what we are communicating,” she says. Treweek is also very hot on setting prisoners free – she intends to implement the Nazareth manifesto from Luke’s gospel, where Jesus, reading from the prophet Isaiah, announces that God has called him “to proclaim liberty to the captives, and the opening of the prison to those who are bound”.


Now that Treweek is Bishop for Women’s Prisons she’s flagged off her campaign for prison reform in the House of Lords last week. Surely that’s not a bad thing? But before you raise a toast and sing She’s a jolly good fellow (sexist, eh?) to this reincarnation of Elizabeth Fry, take a deep breath and listen to the whole story.


Treweek doesn’t want all prisoners to go free. There are around 4,000 female prisoners in Her Majesty’s Prisons and her heart bleeds for these victims of the patriarchal society, which is, no doubt, to blame for women committing crimes. Treweek wants only the guilty women to be let loose. The male prisoners can rot in Wormwood Scrubs for all she cares (unless they self-identify as women).


After all, she’s a feminist. But isn’t feminism all about equal rights for women? My dictionary defines “feminism” as “the advocacy of women’s rights on the ground of the equality of the sexes.” So Rachel, by your own standards, women and men are equal. Men and women are equal before God – in creation and salvation (which is why Treweek was one of the pioneering campaigners for women’s ordination).

If Treweek wants us to treat women as equal to men, why is she launching a campaign that is predicated entirely on special pleading for women? Is she taking us back to the dreadful days of patriarchal hegemony where women were considered the weaker sex? If women can fight in commando units like the SAS in Her Majesty’s Army, surely they aren’t complaining just because they have to do “equal time for equal crime” as the men in Her Majesty’s Prisons?


Her first reason is that “these women present a distinct set of needs and their imprisonment has a significant impact on communities and society as a whole”. Well, don’t men have an equally distinct set of needs? Doesn’t throwing them behind bars also have a significant impact particularly on the family? What if the man of the family is the only breadwinner? What if he is an activist who is not around to protect them from rape squad threats as reportedly happened in the case of Tommy Robinson’s wife and two small children?


We know that a pregnant woman presents a distinct set of needs. But what if this is used as a get-out card as in the case of Natalie Williams from Darlington, County Durham, who after she was arrested, deliberately got pregnant with a new boyfriend – to stay out of prison?


Treweek talks about “the vulnerabilities and challenges of women in prison” but does not name them. Yes, some women, like some men, would certainly be more vulnerable and face more challenges than others. But, surely, to label an entire group on the basis of their gender as “vulnerable” is the most offensive kind of gender stereotyping, isn’t it, Rachel?


At the recent Fourth International Conference for Men’s Rights, where I was invited as a speaker, I heard the testimony of boxer and physical trainer Ramon Sosa, a US citizen from Puerto Rico. Using photographs and FBI reports, Sosa narrated how a  stunningly beautiful Mexican illegal immigrant lured him into marriage and used him to legalise her immigration status. When the couple were on the verge of divorce, she got his best friend to hire a hit man to kill him for $12,000 so she could inherit his business. The FBI staged his death and arrested his wife. She escaped a life sentence and is doing 20 years in jail.


Bishop Rachel, I do wish you would send Mrs Sosa a bottle of Chanel, a bouquet of flowers and a “Get Out Soon” card.


What is Treweek’s justification for privileging women offenders over their men counterparts? ABUSE! Yes! “Unfortunately, the majority of women offenders have experienced some sort of abuse, whether from a partner or a family member,” she laments in her speech to the House of Lords.

Treweek cites Women in Prison, who typically blame “abuse, marginalisation and poverty” as “the root of so much of women’s offending”. She parrots their statistics: “53% of women in jail report having experienced physical, emotional or sexual abuse during childhood; 46% report having suffered domestic violence; and over 30% spent time in local authority care as a child.”


But does “abuse” justify criminal behaviour? Also, would Bishop Rachel support lighter sentences for male offenders if they were abused or orphaned?


Alan Dershowitz, leading criminal lawyer, Harvard Law School professor, and a staunch liberal, lambasts what he calls “the abuse excuse”. In his book The Abuse Excuse and other Cop-Outs, Sob Stories and Evasions of Responsibility, Dershowitz argues that excuses that are gender-specific, send a “dangerous double message of irresponsibility, especially about women. After all, if women who have been abused are not responsible for their violence, then does it not follow that such women are irresponsible and thus untrustworthy?”


Unlike Treweek, Dershowitz really believes in women’s equality. He contends that the kind of “generalization” perpetuated by Treweek and Women in Prison, “if accepted – would contribute a major setback for abused women, and for women in general. It would confirm the sexist stereotype of the woman out of control. Such a generalisation would also be an insult to the thousands of abused women who obey the law – who have not engaged in violence,” because “the truth is that the vast majority of women (and men) who have been abused are entirely capable of controlling their behaviour and complying with the law”.


Perhaps the next time Treweek calls for women to be admitted to so-called Women’s centres rather than prison for their crimes, she could buttress her case by throwing in the premenstrual syndrome defence. Orthopaedic surgeon Geraldine Richter got away with drunken driving and assaultive behaviour after arguing it was premenstrual syndrome, not drunkenness, which caused her crime. This stigmatizes all women with PMS who do not drive drunk or engage in physical violence during the pre-menstrual part of their cycle.


What would Treweek do with 24-year-old Lorena Bobbit who took a knife and cut of her husband John’s penis when he was fast asleep, took the penis and fled in her car, tossing it out on the highway. “He always have orgasm, and he doesn’t wait for me to have orgasm,” the Ecuadorian-born Lorena complained. “He’s selfish.” Lorena also claimed that John raped her. A jury of nine women and three men acquitted John. Searching for his penis, though, was like looking for a needle in a haystack. It was finally found and reattached to John.


Treweek needs to take a red pill before she puts her feminist Nazareth manifesto into operation. The red pill, a popular cultural meme, derived from The Matrix, represents the brutal truths of reality. In 2016, celebrity journalist Cassie Jaye produced a documentary called The Red Pill. Jaye, a feminist, set out to debunk men’s rights movements. Jaye was red pilled by her investigations: men, not women, are the real victims of discrimination in the West, she concluded.


Gender equality activist Elizabeth Hobson contacted me with political dynamite about Treweek’s claims. Men are the real victims of the UK criminal justice system. Flogging as a punishment for female criminals was banned in 1820 but continued for men until 1967. Currently, men account for around 95% of the total prison population despite only committing 3.4 times more crimes than women. For the same crimes, men are given longer sentences than women and women are paroled earlier than men (despite being more likely to be disciplined for bad behaviour whilst incarcerated), Hobson informed me.

Philip Davies, MP for Shipley, who has sat on the Justice Select Committee and the Women and Equalities Committee, slams the rampant sexist “bias towards women” when it comes to sentencing in British courts. Sexism in the justice system is evidenced by the fact men are more likely to be sent to prison than women, despite committing the same crimes. 61 per cent of men found guilty of robbery are sent into custody, while only 32 per cent of women suffer the same fate,” says Davies, courageously battling the deluge of feminist propaganda and disinformation.


“Men have to wear uniforms in prison but women do not ‘because it’s bad for their self-esteem’. The inequality in the justice system is breathtaking. I’m arguing for equality – the justice system should be gender blind,” argues Davies. Davies is bang on target.


Consider the case of aspiring heart surgeon Lavinia Woodward, a student at Christ Church, Oxford University. Woodward dosed on drugs, punched her boyfriend in the face, stabbed him with a bread knife, hurled a laptop at him, then followed up with a glass and a jam jar. The judge let her off the hook because she is an “extraordinarily able young lady”.


Contrast this with Samuel Bunyan, who sexually assaulted a fellow undergrad as she slept. His victim admitted she was “seven out of ten drunk” when she invited him back to her flat “to watch movies”. The judge ordered the young man instantly to prison, and put him “indefinitely” on a sex offender register rendering him unemployable in a normal graduate job.


Take a red pill, Bishop Rachel, before you set


The next time Bishop Rachel trots out the psychobabble of the “abuse excuse” and blames amorphous structures like poverty or sexism or patriarchy, rather than sinful individuals for their actions, she should turn to the first pages of the Bible where the first recorded excuses appear.


Adam blames Eve and Eve blames the serpent. She tells God, “Don’t blame me, blame the serpent, he deceived me.” God, who happens to be a “he” in the book of Genesis, rejects Eve’s defence. Is this why Bishop Rachel is mad at God and so determined to emasculate Him?

Posted by Angelo Agathangelou at 2:13 am