"Israel’s leaders speak openly of genocide and murder, yet they celebrate and promote Israel as if an icon of civilization, democracy and human rights.” By Richard Hugus: Jazz saxophonist and writer Gilad Atzmon was recently banned from playing at an assembly hall in Islington, a borough of London, by order of the Islington Town Council. This came about as a result of an e-mail from one person — Martin Rankoff — saying nothing more than that if Atzmon was going to be at the venue on December 21 he would give a ticket that was given to him to someone else. Rankoff wrote, “Mr Atzmon’s news and beliefs I personally find repulsive and do not wish to be in the same place as him, let alone listen to his music.” Rankoff included links to ADL and Israeli news outlets accusing Atzmon of antisemitism. Incredibly, on the basis of this letter alone, the Islington Council went way out of its way and contacted the show’s promoter to get Atzmon banned — something Rankoff didn’t even ask for.
Imagine the situation in reverse: Gilad Atzmon writes a letter to the Council saying he is uncomfortable with Martin Rankoff appearing in the audience at Islington assembly hall. He refers to Mr. Rankoff’s pro-Israel Twitter page where Rankoff calls Jeremy Corbyn “A Fucking Antisemite and Racist” and where Corbyn is pictured on a bike with a comment suggesting Corbyn should be rammed by a car.
Atzmon says that he doesn’t feel safe with Rankoff in the audience. He finds Mr. Rankoff’s support for Israel repulsive because Israel was founded on genocide against the people of Palestine. As proof he provides links to news reports on the slaughter of unarmed protestors in Gaza since March 30, 2018, and a story on the Deir Yassin massacre of 1948. 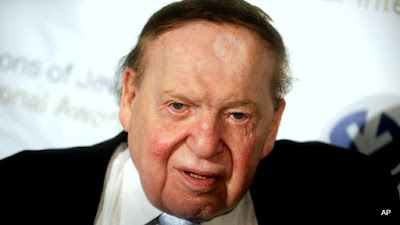 Photo by: Dennis Van Tine/STAR MAX/IPx 5/28/15
Sheldon Adelson at The Champions of Israel Gala. (NYC)
It now appears that Atzmon’s banning was not the result of a casual complaint; it was an intentional attack on a well-respected supporter of Palestinian human rights by the Likud organization, directly represented by Martin Rankoff. The attack was followed up by the hiring of a lawyer who has worked for Likud godfather Sheldon Adelson. The connection to these powerful forces may explain why IslingtonTown Council leader Richard Watts, without any delay or attempt at negotiation, took the step of going straight to a decision to hire an expensive law firm. This is while Islington is facing serious austerity and shortage of funds in its own operating budget. Islington has a population of about 206,000 people. This very month, 43 of those people were counted in one survey as homeless and sleeping on the streets.
Regarding the financial problems of his borough and others around London, Richard Watts, told The Independent in October 2018 :
“As a result less money is being spent on the other services that keep our communities running such as libraries, local roads, early intervention and local welfare support,” he added.
“unprecedented” funding pressures and demand for adult and children’s social care and homelessness services was “pushing councils to the limit”.
Yet, to Watts and his fellow councilors in Islington, backing partisans for a foreign country – Israel — took precedence over the pressing needs of the people whom they are supposed to represent. Either Watts was inexcusably careless with scarce town funds or a deal was made and he knew that he could depend on Likud-Herut to back him. Or, like politicians all across Europe and the US facing the power of the Israel lobby, he knew he couldn’t afford to say no.
According to Simkin’s web site, Gideon Benaim “has extensive expertise in the areas of defamation, privacy, harassment and copyright.” Perhaps it is not a coincidence that immediately after Islington brought in Simkins, identical statements from an unnamed Labour spokesman describing Atzmon as “a vile antisemite” appeared in both the BBC and The Guardian. Perhaps a lawyer experienced in defending people against defamation would also know how to perpetrate it. Perhaps this was Benaim’s opening move. Character assassination is a common tactic in cases that have a weak legal foundation, such as this one, as it goes a long way to convicting the accused before their case ever reaches a courtroom.
The involvement of Likud-Herut in the attack on Gilad Atzmon, and Islington’s official backing of that attack, constitutes a monumental scandal. This wasn’t just a stupid mistake; it was a hit. It is an affront to reason that an an arch-racist organization like Likud, who from the beginning have stood for the removal of the people of Palestine from their own land by means of terror, murder, and forced expulsion, could possibly claim they they were defamed by someone pointing out these very crimes. There is a case of defamation here for sure – the defamation of Gilad Atzmon. For Zionists, defamation is nothing more than a tool to destroy opponents who can’t be dealt with by other means. We are long since tired of truth tellers being accused of antisemitism. We’re tired of national and local resources being used to prop up the criminal state of Israel. Coercion by advocates for Israel is at the center of this issue in Islington, as it is in many other towns and many other countries. For the sake of Palestine and our own sovereignty, it has to be called out and stopped.

Posted by Angelo Agathangelou at 6:39 pm