Does The Sound Of Music Echo Christian Or Epicurean Thought?

By Author Douglas Galbi: The Sound of Music, a Broadway production that opened in 1959 and then became a massively successful movie released in 1965, includes Rodgers and Hammerstein’s song “Something Good.” That song readily prompts grave scholarly thoughts in the mind of the learned. The issue is the nature of creation and a fundamental philosophical divide between Christians and Epicureans.
Maria is a young nun sent on leave from her abbey to serve as a governess to Captain von Trapp. She and the Captain fall in love. That’s mundane normative heterosexuality under the authority of the goddess Venus and her dart-shooting son Cupid. It’s completely uninteresting. But consider a verse that Maria sings to the Captain:

Read more »
Posted by Angelo Agathangelou at 10:23 pm No comments: Links to this post

2018 - The Year Of Living Romantically

Independent Man:
Posted by Angelo Agathangelou at 7:56 pm No comments: Links to this post

By Mike Buchanan, via Mike P, J4MB: This piece starts:


A woman who made a series of unfounded sex abuse allegations about her ex-partner has been barred from seeing their four-year-old daughter.
A High Court judge made the ruling after she concluded that the woman, who cannot be named for legal reasons, had caused ‘significant harm’ to the little girl.
Ms Justice Russell said the woman had made ‘persistent and unsubstantiated’ allegations about the youngster being sexually abused by her father.
The judge said the little girl had been ‘repeatedly subjected to intimate examinations, solely at the behest of her mother’ and been prevented from having an ‘uninhibited relationship’ with her father.

She said the youngster’s early years had been blighted by her mother’s ‘irrational’ behaviour. [J4MB: Her behaviour wasn’t irrational. It was perfectly rational given her expectation that her false allegations would be believed, as false allegations are in so many cases, and she would therefore end up with sold custody of the child.] It goes without saying that the police / CPS should charge the mother with child abuse, but they won’t.

Facebook Says It Is Deleting Accounts At The Direction Of The Jewish Israeli And U.S. Governments

'Calls by Israelis for the killing of Palestinians are commonplace on Facebook'
By Glenn Greenwald: In September of last year, we noted that Facebook representatives were meeting with the Israeli Government to determine which Facebook accounts of Palestinians should be deleted on the ground that they constitute “incitement.” The meetings – called for and presided over by one of the most extremist and authoritarian Israeli officials, its pro-settlement Justice Minister Ayelet Shaked – came after Israel threatened Facebook that its failure to voluntarily comply with Israeli deletion orders would result in the enactment of laws requiring Facebook to do so, upon pain of being severely fined or even blocked in the country. 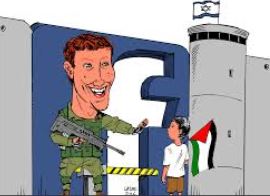 The predictable results of those meetings are now clear and well-documented. Ever since, Facebook has been on a censorship rampage against Palestinian activists who protest the decades-long, illegal Israeli occupation, all directed and determined by Israeli officials.
Indeed, Israeli officials have been publicly boasting about how obedient Facebook is when it comes to Israeli censorship orders:
Shortly after news broke earlier this month of the agreement between the Israeli government and Facebook, Israeli Justice Minister Ayelet Shaked said Tel Aviv had submitted 158 requests to the social media giant over the previous four months asking it to remove content it deemed “incitement”. She said Facebook had granted 95 percent of the requests.

By Philip Weiss: The Ahed Tamimi case is one of the most important events we have covered in recent years because it exposes to the eyes of the world the difference in moral tone between the two sides of the conflict.
Consider the optics. On December 15 in the tiny occupied village of Nabi Saleh, a 16-year-old girl with long blonde hair, Ahed Tamimi, slapped a heavily-armed Israeli soldier who was occupying her back yard, not long after another Israeli soldier had shot Tamimi’s cousin in the face; and when video of the slapping came out, all of Israeli society called for the girl’s arrest, and many were enraged that the soldier was passive. The next night Ahed Tamimi was arrested in a midnight raid; and she is being held without charges, as leading Israelis urge that the key be thrown away, and worse.
Meantime, images of the imprisoned girl’s calm precocious face, framed by the obdurate shoulders of uniformed guards, go round the world, radiating strength and resistance.

Read more »
Posted by Angelo Agathangelou at 8:53 am 2 comments: Links to this post

US To Launch Another War For The Zionist Jews 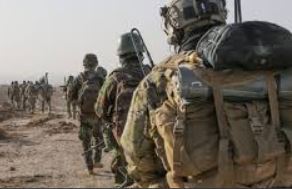 The United States appears to be preparing for a new war to follow the Islamic State’s defeat by Syria with the aid of Russia.
By Alex Gorka: This is a classic example of flip-flop policy. In November, the US promised Turkey to stop arming Kurdish militias in Syria after the Islamic State was routed. Brett McGurk, the US Special Presidential Envoy to the Global Coalition to Defeat Islamic State, explained that after the urban fighting in Raqqa was over "adjustments in the level of military support" would be made. "We had to give some equipment – and it's limited, extremely limited – all of which was very transparent to our NATO ally, Turkey," he said during a special briefing on December 21. In June, the US told Turkey it would take back weapons supplied to the Kurdish the People’s Protection Units (YPG) militia in northern Syria after the defeat of Islamic State.
But sophisticated weapons will continue to be sent to Syria in 2018, including thousands of anti-tank rocket launchers, heat seeking missiles and rocket launchers. The list of weaponry and equipment was prepared by US Department of Defense as part of the 2018 defense budget and signed by Trump of Dec. 12.
Read more »
Posted by Angelo Agathangelou at 5:55 am No comments: Links to this post

MGTOW 101
Posted by Angelo Agathangelou at 2:38 am No comments: Links to this post 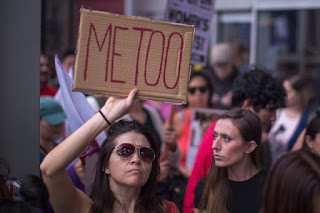 Filed my nails into sharp little points last night so that I may spear and devour the hearts of men.

Can we have a day without men tomorrow?
— Emily McCombs (@msemilymccombs) March 9, 2017
She hates men so much, she doubts whether her own son can be a worthwhile human: