Katie Miranda of "Palestine Solidarity” interviews Alison Weir about her book "Against Our Better Judgement" and her ongoing work with If Americans Knew.
Posted by Angelo Agathangelou at 10:05 pm No comments: Links to this post

Barbara4u2c:
"As soon as you open you're mouth you're mansplaining."

"It is not a war, it is MURDER!"
"The incursion and bombardment of Gaza is not about destroying Hamas. It is not about stopping rocket fire into Israel. It is not about achieving peace. The Israeli decision to reign death and destruction on Gaza, to use lethal weapons of the modern battlefield on a largely defenceless civilian population is the final phase in the decades long campaign to ethnically cleanse Palestinians" Said Chris Hedges.
Read more »
Posted by Angelo Agathangelou at 6:43 pm No comments: Links to this post

Feminists Turn On Their Own Symbol

Raging Golden Eagle: As I keep saying, these people are doing such a good job being a parody of themselves, we don't need to do anything! All we need to do is sit back and laugh as they kneecap themselves.

By Mike Buchanan: A piece in today’s Sunday Times. Emphases ours.

The embattled director of public prosecutions (DPP) is under fresh pressure over an alleged police plot to frame an innocent man for beating his wife.
Alison Saunders is embroiled in the fallout from the failed prosecution of Ade Samuel, who was wrongly accused of domestic violence. 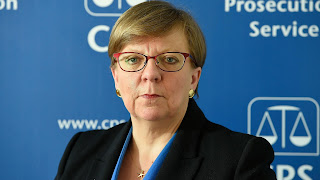 After the collapse of the case, Saunders wrote a letter in support of the decision to charge Samuel with common assault, soon after he had complained about police treatment of his ill wife at their home in north London.
Samuel, 41, claims his protest angered a detective constable at the Metropolitan police, who then allegedly tried to frame him for beating his wife, Jo, whom he cares for 24 hours a day. He has the support of his local MP, Iain Duncan Smith, who raised the case with David Gauke, the justice secretary, in the Commons last week.

The Banality Of Good Part 3 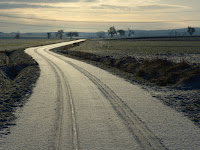 Revising History
By Clara S and Gilad Atzmon: Clara:   You are quoted as saying: “I think that Israel is far worse than Nazi Germany”.
Gilad: My comparison between Israel and Nazi Germany was limited to a discussion on collective accountability in democratic vs. authoritarian regimes. I argued that since Israel defines itself as the ‘only democracy in the Middle East’ its barbarian policies reflect on the Israeli society as a whole, something that can’t be said about Nazi Germany. Once democracy is abolished, collective accountability is removed!
Clara:   Obviously literature dealing with the question ‘what is it in German history that has led Germans into two disasters in the 20th century?’ could fill a lot of library shelves.
For years we were taught that World War I was the Germans’ fault alone, now we know that it was more complicated. And the collective accountability of the Germans of that time and consequently the accountability of Germany as a nation for everything that happened in World War II is still presented as fact in a host of films supporting the narrative of the unique German guilt and explaining it with Hitler’s and the Germans’ dangerous ideology and madness alone.
Now you argue that this narrative is not valid because Nazi Germany was not a democracy.
Gilad:  This is true.

Read more »
Posted by Angelo Agathangelou at 12:08 pm No comments: Links to this post 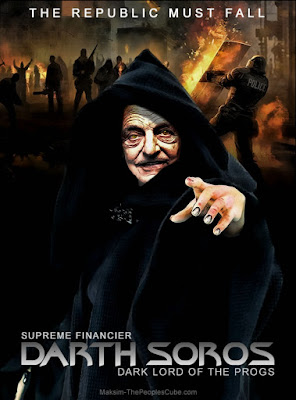 By Jake Johnson: In addition to warning that U.S. President Donald Trump represents an immense “danger” to civilization, billionaire George Soros used the spotlight of the World Economic Forum in Davos, Switzerland on Thursday to urge the international community to take seriously the threats posed by Facebook and Google, which he said could ultimately spawn “a web of totalitarian control” if they are not reined in.
Particularly alarming, Soros said, is the prospect of Facebook and Google - which he scathingly deemed a “menace” to society - teaming up with “authoritarian states” to “bring together nascent systems of corporate surveillance with an already developed system of state-sponsored surveillance.”

How To Get Your Man To Punch You In The Face 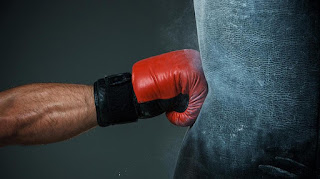 By Paul Elam: Since the early 1970s, we have had an ongoing public dialogue about violence against women. Rather I should say, we’ve had an ongoing feminist diatribe about the subject. Feminists, as you know, aren’t much interested in anything resembling dialogue, unless your idea of dialogue is “march or die.”
And to be fair, traditionalists have been prattling the same way about it going much further back than feminism’s second wave. Where it concerns violence against women, traditionalists are just feminists without funding and hashtags.
The result is that after a half century of so-called feminist scholarship, squandering billions of other people’s dollars on government acts like VAWA, the only perspective we’ve gained on the subject from feminists is a dead match for the time-tested, traditionalist edict, “There is no reason for ever hitting a woman. Ever.”
It’s the domestic violence version of Nancy Regan’s vapid, “Just say no to drugs.”
Whether preached from the mouth of Jessica Valenti or your great-grandfather, that virtue signaling, along with the entrenched belief that men are inherently bad, serves as the unquestioned foundation for thought on the subject.

Even The Police Are Afraid

"Within the rank and file of Canada's national police force serving members of that force have become opportunist victim fantasists for whom concepts such as due process, presumption of innocence and addressing criminal allegations in courts of law are to these members of our national police force oppressive relics of a patriarchy we should work hard to shed in our pursuit of social justice, instead of justice." Said johntheother.

Read more »
Posted by Angelo Agathangelou at 3:26 am No comments: Links to this post 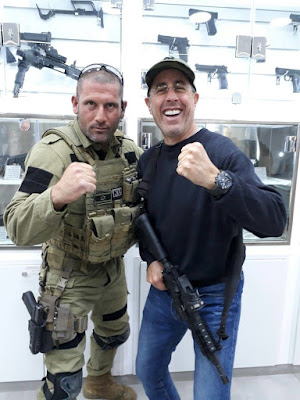 By David Sheen: Jerry Seinfeld drew criticism earlier this month when it emerged that while in Israel to perform in Tel Aviv, the famous comedian visited an air force base and took his family to a tourist attraction in the occupied West Bank for ideological and military instruction.
Seinfeld, seen in a photo posted on Facebook by Caliber 3 then deleted, embodies a stream of American liberalism that abhors guns at home, but glorifies Israeli violence that targets Palestinians.
Caliber 3, the Israeli firm that runs what Israeli newspaper Haaretz calls an “anti-terror fantasy camp” boasted about the Seinfeld family’s patronage in a Facebook post on 7 January.
“Finally we are allowed to tell you!! The legendary Jerry Seinfeld and his family were at Caliber 3 during their visit to Israel last week, they came to us for shooting training with displays of combat, Krav Maga [martial arts], assault dogs and lots of Zionism,” the post – which has since been deleted – said, according to Haaretz.