Washington Threatens America And The World

By Paul Craig Roberts: When I look at news reports from whichever country, I see no awareness of the two most ominous developments in US history. One is the conspiracy between US security agencies, the US Department of Justice, the Democratic Party and the American print and TV media to overthrow the democratically elected president of the United States. With “Russiagate” we have been experiencing a coup against President Trump and American democracy. Although the Democrats’ Identity Politics cannot conceive of it, it is possible to be opposed to President Trump without believing that a police state coup against him is desireable. 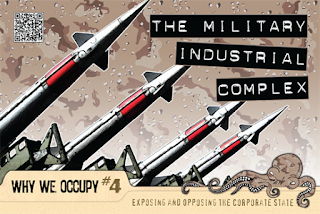 The other ominous development is the just released US Nuclear Posture Review, which calls nuclear weapons “useable,” legitimizes their first use, and sets the stage for spending trillions of dollars acquiring more nuclear weapons when massive public needs go unmet and 10 percent of the existing US arsenal is sufficient to destroy all life on earth.
I have written about these extraordinary developments. See, for example, https://www.paulcraigroberts.org/2018/02/05/will-conspiracy-trump-american-democracy-go-unpunished/ and https://www.paulcraigroberts.org/2018/02/02/nuclear-posture-review/
As for the effect it has had, I might as well not have bothered. No government and no news organization of which I am aware has sounded the alarm that the CIA, FBI, DOJ, Democratic Party, and the entirety of the American print and TV media have been caught red-handed in a coup to overthrow the President of the United States, and nothing is being done about it.

Does Gender Diversity On Boards Boost Company Performance? ...No

Independent Man
Posted by Angelo Agathangelou at 8:19 pm No comments: Links to this post

The Banality Of Good - Finding The Way Home

If Jews can identify with their ‘promised land’, surely Palestinians, the true indigenous people of that land, should be entitled to do the same and actually return to their homes! 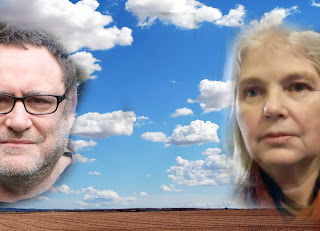 By Clara S and Gilad Atzmon:
Clara: While not many people feel bounded with the soil nowadays, many people would argue that a spiritual home is not enough. I would agree. Identity groups seem to be an answer. But as you rightly said, identitarian views do not make a consistent argument for the universal, especially in a context of victimization. For others home is still a certain place they defend against the invasion of foreigners or wind turbines, which isn’t exactly a universal argument either.
Isn’t following a universal ethos a contradiction to the concept of home? And if not, how do we find our way?
Gilad:  Not at all, the bond to the soil, the love of the land, and even biological identitarianism can become universal as long as you accept that it applies to everyone. I am obviously anti- identitarian, but I do accept that, if Jews, Lesbians, Transsexual and Black can identify politically with their biology, then Whites can also do the same.

Tesco Faces £4 Billion Bill For Back Pay, Because Vagina

By Mike Buchanan, J4MB: From time to time I shop in Tesco’s various stores around Bedford. Invariably I check out my own shopping, it saves time, and I required no training for the task. I spent many years as an executive in the logistics sector, and the idea that the work of a checkout person is equivalent to that of a warehouse worker is nonsense on stilts. If women want to be paid the same as warehouse workers, they should become warehouse workers, and face all the things that make working in warehouses a less attractive job, including unsocial hours, and the need to operate expensive equipment competently and safely. A piece by Robert Miller in today’s Times, emphases ours:

Tesco is facing a demand for up to £4 billion in back pay from thousands of mostly female shop floor staff in what could become Britain’s largest claim for equal pay.
Leigh Day, a law firm, has launched a legal action on behalf of almost 100 shop assistants who say that they earn as much as £3 an hour less than male warehouse workers in similar roles. [J4MB: They’re not similar roles. If they were, more women would want to do them.]
Up to 200,000 shop floor staff could be affected by the claim, which could cost Tesco up to £20,000 per worker in back pay over at least six years.
Paula Lee, a Leigh Day lawyer who is representing the women, told The Guardian that the most common rate of pay for women was £8 an hour, while for men it could be as high as £11 an hour. 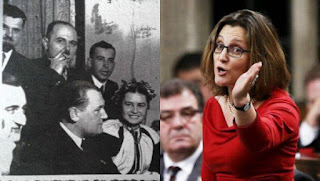 By Cameron Pike: Vancouver, Canada held a significant event in the history of Canada on January 16th, 2018. Canada’s traditional peace-keeping role in international relations relegated to the historical dustbin, Canada’s Feminist Foreign Minister Chrystia Freeland led the ‘international community’ in a song of war and genocide against North Korea.
However, the plan was ultimately not about North Korea, as single-toned as the grouping Freeland gathered tried to make it seem. What was missing were the harmonies a well-trained ear can hear but isn’t sung: Russia and China, noticeably missing from the conference despite making great advances in peace on the Korean Peninsula in the months leading up to the Vancouver gathering, were the missing notes.
For those listening, I ask you, the reader, what is behind the one-note song ‘North Korea is an existential danger to humanity’? Banging away at your insides, like an annoying pop song that you just cannot get out of your head, you become conscious of what is really going on.
For anyone with a 20-year memory, which sadly scarcely exists today in the anti-war movement, Freeland’s war song is eerily reminiscent of Tony Blair banging on about Iraq’s weapons of mass destruction, whispering in the ear of Bush Jr., or Colin Powell’s ‘yellow cake’ song and dance.
Freeland, at this years’ war choral, was clearly playing the role of conductor.

There Is No Metoo Backlash, Yet

"One of the things the modern Mr. Rogers said in his response, the frivolous and phony accusations against him should not be allowed to devalue or derail the MeToo movement which is really important and too important to degrade with phony frivolous false accusations and that's really what I'm responding to right now. I guess that everybody in public broadcasting, everyone with a job on TV or on the radio kinda has to say something like that, ...No, it's garbage, that's garbage talk that people have to say to keep their job, let's not pretend that's real. I don't even think he thinks it's real. ...And of course this is manifesting in the Mike Pence rule, I won't have a meeting with a woman behind a closed door, I won't share my car ride with a woman, I won't get in an elevator with a woman, I won't interview a woman, etc., etc.. ...MeToo is garbage, it is the departure from civilised behaviour." Said johntheother.
Posted by Angelo Agathangelou at 10:20 am No comments: Links to this post

The Scam Of Binary Options 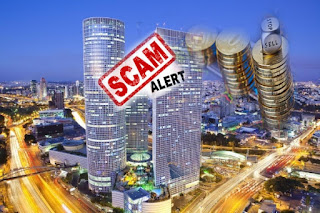 Beginning around 2006 Israelis entered the business of ‘binary’ options.  A binary option is simply a bet an investor places on the price of a given security at a set time in the future.  For instance, if an investor bets that the price of stock X will be at least $65 on Friday, the broker who takes the bet is betting that the price of X will be under $65 on Friday. Neither buyer nor seller owns any interest at all in the underlying stock X at any time during the transaction. Brokerages make money on binary options by selling losing bets to investors.
Israeli brokerages identified potential investors by using call centers that employed primarily young immigrants whose native language was not Hebrew so that they could easily pretend to be calling another city or country, usually a  financial center like London or Frankfurt. Employees were taught the techniques of high pressure sales and were paid based upon the investments they generated.

Read more »
Posted by Angelo Agathangelou at 7:45 am No comments: Links to this post 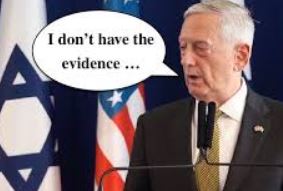 By Tyler Durden: "I don’t have the evidence,” Mattis said. “What I am saying is that other groups on the ground - NGOs, fighters on the ground - have said that sarin has been used, so we are looking for evidence.”
This week the American public was once again bombarded by fresh headlines alleging the Syrian government under President Bashar al-Assad gassed its own people. And in predictable fashion the usual threat of US military force soon followed.
Except of course rather than "alleging" a chemical incident, all the usual suspects from CNN pundits to State Department bureaucrats to Pentagon officials in typical fashion are opting for the simpler "Assad did it" narrative. State Department spokesperson Heather Nauert stated Thursday, "Russia is making the wrong choice by not exercising its unique influence. To allow the Syria regime to use chemical weapons against its own people is unconscionable. We will pursue accountability."
Nauert's statement was a repeat of talking points from last week's chemical attack claims, wherein both she and Secretary of State Rex Tillerson ultimately blamed Russia. But like with other recent chemical attack allegations, the claims couldn't be more vague or poorly sourced, yet was still enough for U.S. officials to issue more direct threats of US military action against Assad.

Read more »
Posted by Angelo Agathangelou at 5:05 am No comments: Links to this post

Max and Stacy discuss banksters getting arrested for manipulating precious metals prices and Millennials signing up for cryptocurrency trading apps by the millions. In the second half, Max and Stacy discuss the Tesla effect in Nevada leading to boom town and the melting ice effect in the Arctic leading to a new ‘Polar Silk Road.’
Posted by Angelo Agathangelou at 2:36 am No comments: Links to this post

thejuicemedia: Thank you Adam Bandt for speaking up for free speech and the right to mercilessly troll Governments ✊🇦🇺
Posted by Angelo Agathangelou at 12:05 am No comments: Links to this post