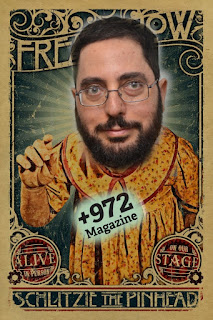 By now, the discourse of the oppressed is defined by the sensitivities of the oppressor.
By Gilad Atzmon: If you want to understand how Jewish domination of the Palestinian solidarity movement has derailed the Palestinian struggle and caused complete paralysis of the movement, the explanation can be found in 972.com and Tom Pessah .
“Anti-Semitism is unlike most other forms of hatred” writes Pessah at 972.com today.  And why? Because  “it is both a form of bigotry and a false accusation.”  An Israeli Jew ‘pro’ Palestinian is telling us that while hatred of Jews is based on lies, other forms of hatred (misandry, misogyny, anti black, Islamophobia) must be factually supported. Can you think of a more telling example of morbid Judeo centrism?
“Bigotry is always bad,”  Pessah writes. And it seems that the tribal merchant has uttered what seems like a universal sentiment, until it becomes clear that again he is only referring to his tribe. “It is bad for Jews inside the pro-Palestine movement .. it is bad for attracting Jews from outside the movement… and it provides plenty of ammunition for those seeking to silence Palestine solidarity activism by equating it with anti-Semitism.” Pessah’s  attack on ‘bigotry’ is only as it applies to Jews.

Why Men Don’t Listen To Women

By Marty Nemko: Women often complain that men, especially when in a long-term relationship, don’t listen to them. Many of these women claim that men can’t communicate. A woman once said to me, “All men want is sex.”
Women may be wise to recognize that many men decide it’s unwise to engage in certain conversations. 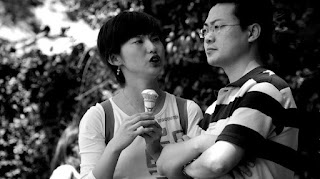 For example, a man may predict that listening to his wife or girlfriend “process her feelings” will not make things better. Rather, it will exacerbate her illegitimate feelings of victimhood, often at the man’s expense.
For instance, if a man forgets his wife’s birthday, he might fear she’ll go into a tirade about how it makes her feel unloved. He may worry she’ll exaggerate how bad it makes her feel so she can extract maximum guilt and recompense from him. He may be afraid that, to gain still more brownie points, she’ll bring up some past faux pas he committed—like catching him watching porn or, “John, you insisted on watching that stupid football game when you knew it was important to me and the family that we visited grandma. I feel totally not loved. I don’t count at all!” (Another exaggeration to extract maximum recompense from him.)
In such a conversation, he may be aware she’s overreacting, and to allow her to vent uninterrupted would give undue legitimacy to her grievance. Yet if he defends himself, for example, by pointing out incidents of her selfishness, she’d accuse him of expanding the argument.

Read more »
Posted by Angelo Agathangelou at 6:03 pm No comments: Links to this post

MGTOW 4orce + King Kashmere
Posted by Angelo Agathangelou at 3:33 pm No comments: Links to this post

US Meddling In Foreign Elections: A CIA Tradition Since 1948

"If the United States truly wants to halt foreign interference
in elections, it must be the first to advocate
and adhere to such a policy..."
By Wayne Madsen: In a shocking display of relative independence from the post-Operation Mockingbird control of the media by the Central Intelligence Agency, a recent article in The New York Times broke with current conventional pack journalism and covered the long history of CIA meddling in foreign elections. 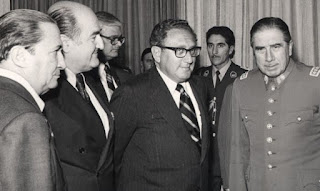 Right: Jew Henry 'The Bastard' Kissinger with one of his little Goy bitches Augusto Pinochet.
A February 17, 2018, article, titled, "Russia Isn’t the Only One Meddling in Elections. We Do It, Too," authored by Scott Shane – who covered the perestroika and glasnost for The Baltimore Sun in Moscow from 1988 to 1991 during the final few years of the Soviet Union – reported the US has interfered in foreign elections for decades. However, a couple of old US intelligence hands were quoted in the article as saying the US meddling was for altruistic purposes. The CIA veterans charged that Russia interferes in foreign elections for purely malevolent purposes. The belief that American interference in global elections was to promote liberal democracy could not be further from the truth.
Read more »
Posted by Angelo Agathangelou at 12:19 pm No comments: Links to this post

Reality doesn’t give a damn how you feel. 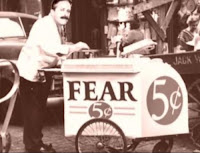 By Robert Gore: A long time ago, I was talking with a woman and the discussion turned to abortion. I don’t remember our exact words, but she said something to the effect that she was viscerally opposed to anything that curtailed women’s right to abortions. I do remember her use of the words “visceral” and “viscerally” because she used them repeatedly, emphasizing her stance.
I asked if the right to control one’s body implied a right to control one’s mind, and the right to control the products of one’s body and mind. Should freedom be general, or does it apply only to the specific case of freedom to abort a fetus? I didn’t get a response, other than one last exclamation that she was viscerally opposed to anything that curtailed women’s right to abortions.
The dictionary defines “visceral” as: “Relating to deep inward feelings rather than to the intellect.” I was trying to get the woman to define the principle supporting her assertion and perhaps extend it to other issues. She had a deep inward feeling, that’s all, no principle, a product of the intellect.
It was some years before I realized that “visceral” was a key to understanding the world. Its definition is not just a definition, it’s a description of how most people perceive and interpret reality most of the time—with their emotions rather than their intellects.

Types Of Lust, Marriage In Paradise & Annulments In Medieval Thought

By Author Douglas Galbi: Within the eight works (Auctores octo) that made up the canon of late-medieval education, one was a twelfth-century poem of Christian doctrine. Called Floretus, this work has been almost wholly ignored in recent centuries. Yet Floretus provides an insightful catalog of lust, a succinct definition of the purpose of marriage, and liberal grounds for arguing divorce and annulment cases.
Floretus strongly condemns men’s lust, the cement of gynocentrism. Echoing medieval MGTOW’s contempt for the world, Floretus implores:
Flee lust; may you be chaste, without sin.
Nothing defiled by lust is pleasing to the Lord.
Whoever consents in the act or, since it delights him,
whoever consents in doing the deed, sins by means of lust.
A carnal act is always destructive outside of
marriage in which there is worthy consent.
{ Luxuriam fugias, castus sine crimine fias!
Nil Domino gratum fit luxuria maculatum.
Luxuria peccat quis, qui consentit in actum
Vel, cum delectat, concentit agendoque factum.

Why You Should Not Hire Women

6oodfella:
Toxic femininity ruins the workplace.
Read more »
Posted by Angelo Agathangelou at 5:29 am No comments: Links to this post

"MGTOW is actually a way to have a path through this chaotic dystopian anti-civilisation anti-human ethos that seems to be dominating the lame stream, the departure from due process, the gleeful destruction of the undermining of Western civilisation by our elected foliticians and so on. I'm going to use Jordan Peterson's rules to establish to demonstrate that MGTOW in fact is a path through all that for men." Said johntheother.
Read more »
Posted by Angelo Agathangelou at 2:42 am No comments: Links to this post 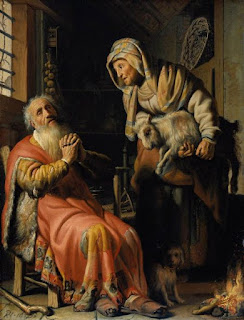 By Author Douglas Galbi: Women are wonderful. Males are evil. The male and female genders are equal. Gender equality advances whenever women come to dominate a group, such as college graduates, doctors, and elementary school teachers. Compared to this modern dogma, medieval thinkers had a more sophisticated understanding of gender.
Medieval women weren’t taught to fear rapists everywhere. In the Middle Ages, a man’s penis wasn’t regarded as a weapon of violence. Ancient literature recognized that a penetrating penis provides pleasure to the encompassing body.
Nonetheless, disparaging and oppressing men’s sexuality has a long and sordid history. The relatively enlightened Middle Ages wasn’t immune to that hateful social direction. Matthew of Vendôme’s twelfth-century expansion of the Book of Tobit depicted Sarah as fearful on her wedding night:
The maiden is afraid and is drenched in tender tears: the
first little lump of earth fears the use of the unknown plowshare.
{ Virgo timet, teneris lacrimis exuberat: usum
Vomeris ignoti primula gleba timet. } [1]