E.B. Bax talks of first-wave feminists soliciting, expecting and receiving male chivalry for the benefit of women. His assessment below prefigures how “chivalry feminists” have continued to operate through second and third-wave feminism. Indeed it can be argued that feminism’s most effective source of agency has always been its reliance on male chivalry.
Ernest Belfort Bax quotes: 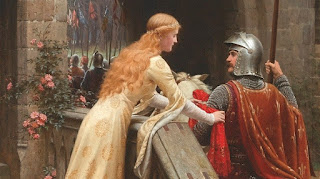 I decline to bow down before a sexual principle, or to admit the justice of granting privileges on the basis of a sex-sentiment. What I contended and still contend is that the bulk of the advocates of woman’s rights are simply working, not for equality, but for female ascendency. It is all very well to say they repudiate chivalry. They are ready enough to invoke it politically when they want to get a law passed in their favour – while socially, to my certain knowledge, many of them claim it as a right every whit as much as ordinary women.

Assange Lashes Out: "Hypocritical [UK] Motherfuckers... Remember How I Exposed Your Secret Deal With The Saudis"

By Tyler Durden: Wikileaks founder Julian Assange lashed out at the UK government over Twitter on Friday after Britain's official UN account (UK Mission to the United Nations) tweeted "A free and independent media fulfils a vital role in holding the powerful to account and giving a voice to the powerless," with a link to a puff piece waxing eloquent over the UK's commitment to free speech.
Assange - apparently not included in the UK's definition of "free and independent media" (facing arrest and detention should he leave the Embassy), fired off a stunning reply - claiming that the UK's has spent roughly twice as much spying on him as it has on their entire international human rights program.


"And that is exactly why you have detained me without charge for eight years in violation of two UN rulings and spent over 20 million pounds spying on me you hypocritical mother fuckers. Your entire international human rights programme is £10.6m you pathetic frauds."

Read more »
Posted by Angelo Agathangelou at 6:27 pm No comments:

Bettina Arndt: First highlights of Bettina Arndt in-depth interview with Jordan Peterson at the start of his Australian tour.

The data is clear. Growing up without a father can have significant negative consequences for any child, particularly if you’re a boy, and particularly within our cultural environment. Some 35% of children in the US and Canada do not live with their biological fathers. Many of these kids will not experience a regular, meaningful, positive interaction with a man until they meet their grade 8 math teacher. Fatherless boys are particularly vulnerable to what feminists would describe as “fragile” or “toxic” masculinity, forms of masculinity that are harmful to both those who embody them and the people around them. Why, then, do so many of these same feminists seem so opposed to measures that would promote and reinforce the relationships of sons with their own fathers?

Read more »
Posted by Angelo Agathangelou at 11:59 am No comments:

One Of Georgia's Safest Cities 'Requires' Its Citizens To Own A Gun; CNN Unsure Why Crime Is So Low

By Scott Morefield: When it comes to America’s response to gun crime, one Georgia town has been thinking outside the box since 1982, when its leaders passed a law requiring it citizens to own a firearm.
The Kennesaw, Georgia, law states that “every head of household residing in the city limits is required to maintain a firearm,” according to CNN, and was reportedly passed as a deterrent to crime.
“It was meant to be kind of a crime deterrent,” Kennesaw Police Lt. Craig Graydon, a 30-year law enforcement veteran, told CNN. “It was also more or less a political statement because the city of Morton Grove, Illinois, passed a city ordinance banning handguns from their city limits.”

As for would-be criminals looking for an easy mark, judging by the crime statistics it seems most have bypassed the Georgia town and moved on to easier targets. Even CNN was forced to admit that Kennesaw, populated by 33,000 people, has only had “one murder in the last six years and a violent crime rate of below 2%.”

Read more »
Posted by Angelo Agathangelou at 9:07 am No comments:

Empire Files: On top of overtly genocidal threats, the Trump Administration has announced new terms: that they "will never accept a nuclear North Korea." But, the Democratic Peoples' Republic of Korea already has nuclear weapons. Does that mean a war is imminent? While the bipartisan warmongering is receiving no push-back from the mainstream media, Abby Martin interviews Tim Shorrock--journalist and expert on US-Korea relations--to learn what is left out of the debate and the potential cost of a new war.

Posted by Angelo Agathangelou at 6:39 am No comments:

Divide And Conquer - Why Does The U.S. Hate Peace?

Kim Jong-On has good reasons to be afraid of us
By Ted Rall: Give peace a chance, the song urges. But the United States Neo-Con-Artists won’t have it.

Olympic diplomacy seems to be working on the Korean peninsula. After a pair of South Korean envoys visited Pyongyang, they issued a promising communiqué. “The North Korean side clearly stated its willingness to denuclearize,” the statement said. Considering that the Korean crisis and a derpy emergency management official had Hawaiians jumping down manholes a few months ago, this news comes as a relief. 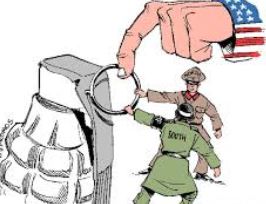 Then comes the rub. The South Korean statement continued: “[North Korea] made it clear that it would have no reason to keep nuclear weapons if the military threat to the North was eliminated and its security guaranteed [my emphasis].”


In other words, the DPRK is saying — reasonably — we’ll get rid of our nukes but only if you promise not to invade us. That guarantee would have to be issued by two countries: South Korea and the United States.


This would directly contradict long-standing U.S. foreign policy, which clearly and repeatedly states that the use of military force is always on the table when we don’t get our way in an international dispute. Kim Jong-On has good reasons to be afraid of us.

Read more »
Posted by Angelo Agathangelou at 2:35 am No comments:

'In Britain various Zionist organisations and media outlets dedicate themselves to threatening the British public.'

By ex-Jew Gilad Atzmon: The charge of ‘antisemitsm’ has become a noise -- a whiny repetitive background disturbance. We have learned to live with it, to accept that some people are just inherently upset and there is nothing we can do to change them or to help them out.
In Britain various Zionist organisations and media outlets dedicate themselves to threatening the British public. They torment the biggest political party in Europe and its leaders by tossing about their accusations  of ‘antisemitism.’ They crudely interfere with freedom of speech and the basic liberty to choose to oppose Israel and its tribal lobby.
Miraculously, it seems the Brits have become inured to the endless racket. By now they either ignore the constant moan or they are just irritated  with the producers of that perpetual noise. In any case, it is clear that despite their persistent slander of Corbyn, he is more popular than ever. At this point I suspect that it might be more damaging to Corbyn if they were to allege that actually Corbyn is Jewish, perhaps the son of a rabbi.
This week, every Jewish outlet around the world reported that Jeremy Corbyn was an active member of a ‘secret’ Facebook group made up of Holocaust deniers and anti-Semites.
They are referring to a tedious 280-page report released by David Collier, that details supposed ‘anti-Semitic’ and anti-Israel material shared by members of the group. For instance, one member of the group wrote that he had read “Mein Kampf,” and suggested that “Everybody should be forced to read it, especially Jews who have their own agenda as to why they were not liked.”