Putin Opens Up About The Numerous Attempts On His Life

VN: It is impossible to reach any agreement with Russia if you treat it aggressively, and our partners should have it very clear, as Vladimir Putin declared in his interview to Andrey Kondrashov.

Bonobo3D: Jason Junge was looking for information about the psychological impact of circumcision and found Ronald Goldman's landmark book, "Circumcision: The Hidden Trauma."

Read more »
Posted by Angelo Agathangelou at 7:05 pm No comments: Links to this post

"How unhinged do you have to be to call Christina Hoff Sommers a fascist?" Asks Independent Man:
Posted by Angelo Agathangelou at 4:19 pm No comments: Links to this post

By Gilad Atzmon: I am being sued for libel in the High Court in England by Campaign Against Antisemitsm’s chairman Gideon Falter. I have made the decision to fight this crucial battle for freedom of expression even though this fight poses a real risk of bankrupting me and my family.
I choose to fight their suit because I believe that the CAA and its chairman and its use of libel laws pose a danger to freedom of speech and the future of this country as an open society. Enough is enough! 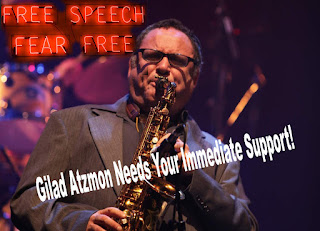 Mr. Falter has sued me for comments I made on my own website.
My comments were made in the context of expressing my opinion about the situation where, last July, The British Crown Prosecution Service (CPS) attested that there had been no increase in anti-Semitism in Britain, and Gideon Falter and the CAA refused to accept the CPS’s verdict. Falter and the CAA insisted that anti Semitism was on the rise. Sky news reported on the discrepancies between the findings of CPS and the CAA.
My article focused on the choice examined by Sky News between two accounts, one maintained by Falter and the CAA, an NGO that is dedicated to prosecuting antisemitism with “zero tolerance”, and the judicial approach of the CPS: a public body, subject to scrutiny and committed to impartiality.
My comments about the CAA are the basis of their lawsuit.

Read more »
Posted by Angelo Agathangelou at 12:52 pm No comments: Links to this post

Addameer: During January and February 2018, Israeli Occupation Forces arrested 1319 Palestinians from the occupied Palestinian territories, including 274 children, 23 women and 4 journalists.

These figures are drawn from a joint report for the months of January and February, which was issued by  the Prisoners and Liberties Affairs Association, Palestinian Prisoner Club, Addameer Prisoner Support and Human Rights Association, and Al Mezan Center for Human Rights) on Tuesday.
Those arrested included: 381 individuals from Jerusalem; 233 from Ramallah and Al Bireh governorate; 140 from Hebron governorate; 133 from Jenin; 118 from Bethlehem; 107 citizens from the governorate of Nablus; 59 from Tulkarm governorate; 54 from Qalqiliya governorate; 20 from Salfit; 21 from Jericho; and 30 from the Gaza Strip.
Read more »
Posted by Angelo Agathangelou at 10:59 am No comments: Links to this post

'Any strikes in and around Damascus would almost certainly endanger Russian military personnel.'
By Marko Marjanović: Lately the US has been talking up a possible attack on the Syrian army in response to its very successful offensive against the rebel Islamist enclave of Ghouta near Damascus. 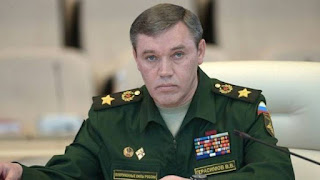 General Gerasimov - the overall commander of Russia’s armed forces
The United States on Monday warned it was ready to act in Syria if needed to end chemical attacks and “inhuman suffering” as it pushed for a new 30-day ceasefire in Eastern Ghouta at the United Nations Security Council
The US ambassador [Nikki Haley] recalled that President Donald Trump had ordered missile strikes on a Syrian air base in April last year in retaliation for a sarin gas attack blamed on President Bashar al-Assad’s forces.
“We also warn any nation that is determined to impose its will through chemical attacks and inhuman suffering, most especially the outlaw Syrian regime: the United States remains prepared to act if we must,” Haley said.
The Russian military at least is taking the threat seriously. The chief of Russia’s armed forces has issued a warning of his own:

'America is now stuck in a perpetual pro-war propaganda cycle' 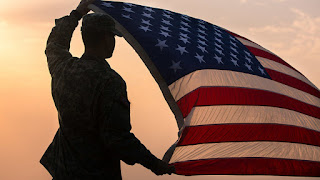 By Michael McCaffrey: The Pentagon helps Hollywood to make money and, in turn, Hollywood churns out effective propaganda for the brutal American war machine.
The US has the largest military budget in the world, spending over $611 billion – far larger than any other nation on Earth. The US military also has at their disposal the most successful propaganda apparatus the world has ever known… Hollywood.
Since their collaboration on the first Best Picture winner ‘Wings’ in 1927, the US military has used Hollywood to manufacture and shape its public image in over 1,800 films and TV shows. Hollywood has, in turn, used military hardware in their films and TV shows to make gobs and gobs of money. A plethora of movies like ‘Lone Survivor,’ ‘Captain Philips,’ and even blockbuster franchises like ‘Transformers’ and Marvel, DC and X-Men superhero movies have agreed to cede creative control in exchange for use of US military hardware over the years.
In order to obtain cooperation from the Department of Defense (DoD), producers must sign contracts that guarantee a military approved version of the script makes it to the big screen.

"Think about the ways your understanding of what's happening in Syria, or Ukraine, or anywhere else is shaped by what they [the lame stream media] show you and what they do not show you. ...It's literally framing your perception of the world" Points out James Corbett.
The eye of the camera is determining what you see and what you do not see, whether you know it or not. Don't let the lame stream media frame your understanding of the world...or at least be conscious of the fact that they are framing the world for you.
Posted by Angelo Agathangelou at 3:28 am No comments: Links to this post

'The most troubling issue is the behavior of
the lame stream media who fail to point out that
May's claims are bluster and that there is
no evidence at all that supports her claims. '
By Moon of Alabama: The British government claims that 'Novichok' poisons, developed 30 years ago in the Soviet Union, affected a British double agent. But such substances may not exist at all. The British government further says that the Russian government is responsible for the incident and has announced penalties against the country.

A comparable incidents happened in 2001 in the United States. Envelopes with Anthrax spores were sent to various politicians. Some people died. The White House told the FBI to blame al-Qaeda but the Anthrax turned out to be from a U.S. chemical-biological weapon laboratory.  The case is still unsolved.
The 'whistle-blower' Vil Mirzanyanov who 'revealed' the 'Novichok' program and its poisons published chemical formulas that should enable any decent laboratory to reproduce them. But neither the existence of the claimed program nor the existence of the alleged substances were ever accepted by the scientific community. The Russian government says it does not know the program nor the alleged poisons.
The highly constructed drama around the alleged poisoning of a British double agent Skripal and his daughter has thus turned into a surreal play.