By Michael Krieger: If you spend any time on Twitter, you’ll probably be familiar with the latest pathetic attempt to defend and insulate the U.S. status quo from criticism. It centers around the usage of an infantile and meaningless term, “whataboutism.” 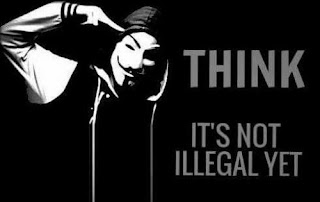 
When O’Reilly countered that “Putin is a killer,” Trump responded, “There are a lot of killers. You got a lot of killers. What, you think our country is so innocent?”
This particular brand of changing the subject is called “whataboutism” — a simple rhetorical tactic heavily used by the Soviet Union and, later, Russia. And its use in Russia helps illustrate how it could be such a useful tool now, in America. As Russian political experts told NPR, it’s an attractive tactic for populists in particular, allowing them to be vague but appear straight-talking at the same time.
The idea behind whataboutism is simple: Party A accuses Party B of doing something bad. Party B responds by changing the subject and pointing out one of Party A’s faults — “Yeah? Well what about that bad thing you did?” (Hence the name.)

Read more »
Posted by Angelo Agathangelou at 9:29 pm No comments:

By Richard Irvine: Israel has expropriated a natural spring in the occupied West Bank village of al-Walaja, making off-limits a site long used by Palestinian residents for picnicking and swimming. 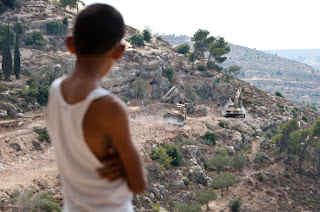 I have only been to al-Walaja twice. On the first occasion, in 2006, I was a volunteer with the YMCA of Palestine, helping to harvest olives from fields that al-Walaja’s Palestinian farmers could no longer access without threat of arrest or worse due to their proximity to Israeli settlements.
On that occasion two soldiers from the Israeli army turned up. They were pleasant; they seemed amused at our presence – eccentric foreigner “do-gooders” come to help the undeserving. They stayed but 20 minutes and left with a smile and a laugh.
A week later the fields we had harvested were declared a “closed military zone” by arbitrary edict of the occupation. No one, except those who could obtain an authorized military permit, could now access them.

Effectively, the farmer we had helped with the harvest had his lands seized because we had helped him. The unofficial policy of keeping him off his lands was formalized into an official policy of keeping him off his lands.
Peaceful protest met with violence
The second occasion I was in al-Walaja had a similar outcome. In 2009, I, with other volunteers, attended a lone farmer’s protest at the checkpoint on the nearby bypass road built for the use of Israeli settlers.
Read more »
Posted by Angelo Agathangelou at 7:04 pm No comments:

“We can ignore reality, but we cannot ignore the consequences of ignoring reality.” - Ayn Rand

By Tyler Durden: President Donald Trump may have kicked the hornet's nest by signing on Friday the "Taiwanese Travel Act", encouraging official visits to Taiwan by officials at all levels with an emphasis on "national security officials."
The signing angered the newly crowned Chinese President Emperor Xi Jinping, who lashed out at Trump and the US during a speech on Tuesday marking the start of his second term running the world's most populous country. Xi warned that attempts to sow divisions between China and Taiwan would be "punished by history".
His speech follows Chinese bureaucrats' rubber-stamping changes to the constitution that could allow Xi to serve as leader for life, or as some have correctly defined it, emperor.


Read more »
Posted by Angelo Agathangelou at 1:05 pm No comments:

Thomas Sowell: Show Me the Evidence

Independent Man: It's simultaneously amusing and demoralising that basic common sense, evidence based arguments Thomas Sowell was making almost 40 years ago are still being ignored today in favour of emotions and feelings.

Read more »
Posted by Angelo Agathangelou at 10:36 am No comments:

"A departure away from due process and the courts as a place to resolve criminal grievances and a positive joyful embracing of vigilante mob justice articulated through lame stream media and social media, that's what the 'Me Too' movement is." Said johntheother.
Posted by Angelo Agathangelou at 8:03 am No comments:

The Fall Of Men

Gary Orsum: Tucker Carlson talks to Jordan Peterson about the perils of masculinity in the current socio-political climate.

Read more »
Posted by Angelo Agathangelou at 5:25 am No comments:

By Dr. Paul Craig Roberts: Washington’s gratuitous raising of tensions with Russia that we have been witnessing for many years is so reckless and irresponsible that we need some relief from the depression of it all. Perhaps I am grasping at straws, but here are some hopeful developments. - An establishment journalist, Michael Goodwin, the chief political columnist for the New York Post and a former bureau chief for the New York Times, has blamed the New York Times and Washington Post for the destruction of journalistic standards in the United States. https://imprimis.hillsdale.edu/2016-election-demise-journalistic-standards/
—James Kallstrom, an Assistant Director of the FBI, told Fox News that high-ranking people throughout the US government coordinated a plot to help Hillary Clinton avoid indictment:
“I think we have ample facts revealed to us during this last year and a half that high-ranking people throughout government, not just the FBI, high-ranking people had a plot to not have Hillary Clinton, you know, indicted.
“I think it goes right to the top. And it involves that whole [Russiagate] strategy—they were gonna win, nobody would have known any of this stuff, and they just unleashed the intelligence community. Look at the unmaskings. We haven’t heard anything about that yet. Look at the way they violated the rights of all those American citizens.”

Read more »
Posted by Angelo Agathangelou at 12:41 am No comments: