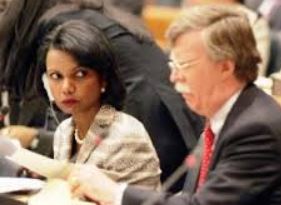 By Lee Fang: John Bolton, President Donald Trump’s pick to be his new national security adviser, has a long association with a group infamous for its role in publishing “fake news” and spreading hate about Muslims.

Bolton wears many hats. He serves as a fellow at the American Enterprise Institute and a contributor to Fox News, and controls a Super PAC that used money from the billionaire Mercer family to help elect congressional Republicans.
But one role that has received relatively little scrutiny is his work as chair of the Gatestone Institute, a nonprofit that focuses largely on publishing original commentary and news related to the supposed threat that Islam poses to Western society. He has served in that role since 2013. (Bolton did not respond to an email seeking comment.)
A steady drum beat of vitriol is visible on the Gatestone website on almost any given day. Just this week, the Gatestone Institute published stories claiming that the “mostly Muslim male migrants from Africa, Asia and the Middle East” in Germany are fueling a “migrant rape crisis” and that “Muslim mass-rape gangs” are transforming the United Kingdom into “an Islamist Colony.”
The website routinely portrays Muslim migrants and refugees as an existential threat to Europe and the United States, claiming that immigrants bring “highly infectious diseases,” genital mutilation practices, and terror to any nation that accepts them. The site spent years sharply criticizing the Obama administration for having a “traditional Muslim bias” against Christians.
The lurid headlines, which are translated into multiple languages and distributed widely through Gatestone’s social media page and its partners in conservative media, are rarely supported by the evidence.

Dankula: Guilty Of An Offence

johntheother: If there's a legitimate legal defence fundraiser for Count Dankula, post it in the comments or message me and I'll add it in the description here. ...Section 127 of the communications act is a recursive law that violates itself.
Posted by Angelo Agathangelou at 5:51 pm No comments: Links to this post

vanessa beeley: 23rd March 2018. Eastern Ghouta is almost fully liberated and the Syrian Arab Army enter Ein Tarma, an area that had been under control of a number of terrorist groups since 2012. The daily threat of death by mortar in Damascus City is now almost 100% over. Finally all the people of Damascus can return to the peace they had before the US Imperialist venture - another regime change war - began in earnest in 2011, but was planned long before that.
Posted by Angelo Agathangelou at 2:58 pm No comments: Links to this post

Ewan Jones talks to Mike Buchanan, head of the political party Justice for Men and Boys (J4MB). This party has recently celebrated it's fifth anniversary. Mike discusses the origins of the party, it's achievements thus far, and it's goals for the future. We talk about the International Conference on Men's Issues 2018, which is to be held from July 20th - 22nd in London. This event will be co-hosted by J4MB and 'A Voice for Men'. Mike reveals who's going to be speaking at the conference. We then talk about the success of this event in previous years, and why this year's conference is going to be another great occasion

Independent Man: Sydney University has decided to introduce new diversity targets for debating teams.
Posted by Angelo Agathangelou at 10:20 am No comments: Links to this post

A law unto themselves.
Gary Orsum

Read more »
Posted by Angelo Agathangelou at 7:46 am No comments: Links to this post

Most Corrupt In The World, Cambridge Analytica, Democratic Elections Are A Joke

"Police in the USA now steal more from the people than we steal from each other!"
Lee Camp explains why USA may be threatening the Jewish state Israel's slot as the most corrupt nation on Earth and expresses his disgust at how corporate media just discovered the existence of Cambridge Analytica . . . about a year too late. John F O’Donnell shows us what’s been hidden in the omnibus spending bill and Natalie McGill reports on why Americans are donating their plasma.

Read more »
Posted by Angelo Agathangelou at 5:43 am No comments: Links to this post 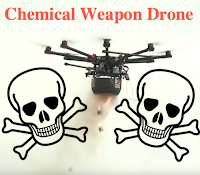 By Tyler Durden: For the first time, Lebanon-based Al-Mayadeen TV released new dramatic footage showing Israeli death forces [JSIL's IDF] using a weaponized unmanned aerial vehicle (UAV) against a protest rally in the Gaza Strip, according to the Times of Israel.
The short video clip published by Al-Mayadeen shows a weaponized unmanned aerial vehicle (UAV) targeting demonstrations in the southern Gaza Strip, controlled by the Palestinian freedom fighters Hamas.
The UAV is seen flying through the skies above hundreds of peaceful protesters, while operators of the aircraft drop chemical weapons into the crowd. The Times of Israel states that the UAV released tear gas, formally known as a lachrymator agent, which causes severe eye and respiratory pain, skin inflammation, bleeding, and even blindness.
The intense footage below could provide us with the early knowledge that governments are willing to use high-tech military technology against civilians in a non-combat environment…
Jewish state Israeli border death squads Deputy Commissioner Yaakov Shabtai, the government official behind the deployment of the weaponized unmanned aerial vehicle (UAV), told Hadashot TV news that the tear gas drone provides Jewish death forces with an extended range to hurl chemical weapons at peaceful protestors.

Why Apartheid State Israel Has No Right To Jail Ahed Tamimi 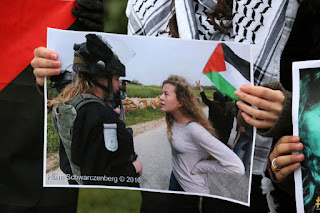 By Bernadette McAliskey: Ahed Tamimi was 16 years old when arrested and detained. Her crime against humanity is that with her bare hands she slapped an armed soldier.
Now 17 years old, Ahed is not yet an adult – by international definition. Following a plea deal, she will spend eight months in prison.
The reality is that Ahed is not imprisoned because she slapped a soldier but because she is a visible symbol of Palestinian resilience and the next generation of resistance which continues to prevent the lie that is the State of Israel being globally accepted as an inevitable truth.
A veritable David in battle with Goliath, fair hair flying, hailed as the lion of Palestine, Ahed, by international human rights standards, remains a young person denied her liberty in contravention of the international human rights obligations of the State of Israel. She is entitled to the international protection afforded to children and young people: protection of her identity, including her national identity; protection of her liberty; of her life and family life; protection of her right to education.
She has been afforded none of these protections since the day she was born. She is the second generation of her family, the third of her nation to be so denied.