Voltaire
Posted by Angelo Agathangelou at 10:35 pm No comments: Links to this post

The Science Of A Vanishing Planet

"They are not ‘seed companies’. They are ‘seeds-that-need-our-chemicals-to-grow’ companies. And they are out to conquer the entire world..."
By Raúl Ilargi Meijer: There are numerous ways to define the Precautionary Principle. It’s something we can all intuitively understand, but which many parties seek ways to confuse since it has the potential to stand in the way of profits. Still, in the end it should all be about proof, not profits. That is exactly what the Principle addresses. Because if you first need to deliver scientific proof that some action or product can be harmful to mankind and/or the natural world, you run the risk of inflicting irreversible damage before that proof can be delivered. 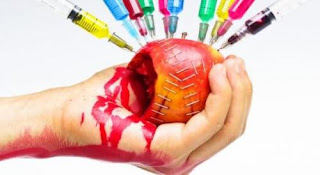 In one of many definitions, the 1998 Wingspread Statement on the Precautionary Principle says: “When an activity raises threats of harm to human health or the environment, precautionary measures should be taken even if some cause and effect relationships are not fully established scientifically.”
Needless to say, that doesn’t easily fly in our age of science and money. Cigarette makers, car manufacturers and oil companies, just to name a few among a huge number of industries, are all literally making a killing while the Precautionary Principle is being ignored. Even as it is being cited in many international treaties. Lip service “R” us. Are these industries to blame when they sell us our products, or are we for buying them?

“Hosanna” means “save us,” but Israeli soldiers descended on Palm Sunday worshipers anyway,
grabbing Palestinian flags out of their hands
in the middle of their holy procession. 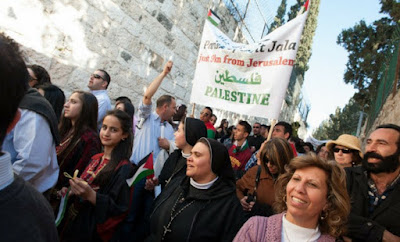 Palestinian Christians protest Israeli permit regime during Palm Sunday procession. (Photo: ActiveStill.org)
From The Palestine Chronicle: Israeli soldiers attacked Palestinian Christians during the traditional Palm Sunday procession in Jerusalem, while they were celebrating by carrying palm fronds and chanting special hymns.
The army also banned marching Palestinian Christians from carrying the Palestinian flag, and attacked those who tried to raise it. However, several people from European countries were allowed to carry their countries’ flags.
Palm Sunday marks the start of the Holy Week that commemorates Jesus’ entrance in Jerusalem, his crucifixion and resurrection on Easter Sunday.
Read more »
Posted by Angelo Agathangelou at 5:38 pm No comments: Links to this post

"For Putin as well as Xi, the supreme arbiter is the national state, not a bunch of oligarchs like it’s become a norm across the liberal and neoliberal West." 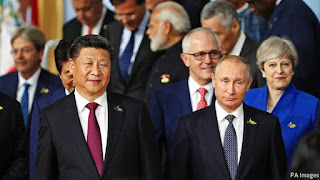 By Pepe Escobar: The Chinese constitutional amendment allowing Xi Jinping the possibility of further presidential terms — staying in power long enough to bring “national rejuvenation” combined with the Russian election re-confirming Vladimir Putin in the presidency have assured consistency and continuity for the Russia-China strategic partnership way into the next decade.
This will facilitate the interaction between the Belt and Road Initiative (BRI) and the Eurasia Economic Union (EEAU); policy coordination inside the Shanghai Cooperation Organization, the BRICS and the G-20; and the overall drive towards Eurasia integration.
The strengthening of what should be viewed as the Putin-Xi era could not but render Western liberals – and neoliberals – absolutely livid.
Capitalist interests have always believed their own propaganda narrative, which directly links capitalist expansion with the inevitable spread of democracy.
Critical thinking is, at last, debunking it as a grand illusion.
What in fact happened since the early 1980s was that Western turbo-capitalism avidly profited from a variation of neo-slave labor in China’s Special Economic Zones (SEZs).

Read more »
Posted by Angelo Agathangelou at 3:30 pm No comments: Links to this post

Its Off To Jail With You

DoctorRandomercam:
Express yourself why not. It's a hell of a drug don't you know.
Posted by Angelo Agathangelou at 12:32 pm No comments: Links to this post

"Want To Freak Yourself Out?" Here Is All The Personal Data That Facebook/Google Collect

"I'm probably on an FBI watch-list now, so if I die in the next few months IT WASN'T AN ACCIDENT, IT WAS A SET-UP..."

Instead, the backlash to these revelations - which has been justifiably focused on Facebook - is so severe because the public has been forced to confront for the first time something that many had previously written off as an immutable certainty: That Facebook, Google and the rest of the tech behemoths store reams of personal data, essentially logging everything we do.
In response to demands for more transparency surrounding user data, Facebook and Google are offering users the option to view all of the metadata that Google and Facebook collect.
And as Twitter user Dylan Curran pointed out in a comprehensive twitter thread examining his own data cache, the extent and bulk of the data collected and sorted by both companies is staggering.

By Ghassan Kadi: March 2018 seems to continue to be full of surprises, and when we speak about the imminent and inevitable collapse of the Empire, and the consequential demise of global Western influence, we often forget who is the biggest loser, or rather victim, of this forthcoming event.
Without a speck of doubt, the biggest loser will be the Western civilian.
The time has come for citizens of the West to wake up and realize that the Western Civilization is under threat, a huge threat. The threat is not from Russia as their politicians have managed to convince them in order to deflect their attention, but from their failed leaders.

When Westerners watch TV news, they hear lies. When they go to their ballot boxes, they hear false promises. When they are told that their sons and daughters are sent to fight a war in a distant country in order to protect the homeland, they are hearing fabricated stories of lies and deception.
Their politicians lie, and their media dance to the tunes of the lies of their politicians.
After their governments lied to them about Korea, Vietnam, Iraq, Afghanistan and Libya, and they know they lied, they continue to believe their lies about Syria and Russia today.
A few decades ago, the perception of those lies by the populace did not make much of a difference, because the West was “flying high” on many fronts. But this is now changing, and changing fast.

How Tennis Exposes The Lie Of Feminism

WotW looks to the world of sport to show how
feminism is trying to corrupt the reality of gender.
Posted by Angelo Agathangelou at 5:10 am No comments: Links to this post

"A message from The Women Against Tiredness Society."
Posted by Angelo Agathangelou at 2:45 am No comments: Links to this post

Sometimes I fail.
Which is more important as a driver of inequality in educational attainment: sex or geographical location in the country?
Yesterday, 26/3/18, the press was full of a new report from the Children’s Commissioner of England, Anne Longfield, titled “Growing Up North – Look North: A generation of children await the powerhouse promise”. Based on 12 months of research and conversations with children, schools, businesses, councils, health professionals and charities, the main theme of the report was the educational divide between north and south. At all levels, primary, secondary and university entry, those in the “north” are trailing behind, the report tells us. Even if we compare similar socioeconomic groups, there is still a large regional gap. For example, a child on free school meals (FSM) living in London is twice as likely to go to university as a child on FSM from the north.
So far, so good. This is true, and it is entirely valid to bring attention to the fact – although I would quibble with the emphasis on the north/south split. In truth it is closer to being a London-versus-everywhere-else split, as we shall see.
So what’s my beef?
It’s the usual thing: the report completely ignores the fact that the gender gap in educational attainment is as bad – and arguably far worse – than the regional gap in attainment, serious though that also is.
Distressingly, this neglect appears to be deliberate.