IAK: An exposé on Israel's detailed projects – some public, some covert – to influence what people see on the Internet, and what they don't. From the article, "How Israel and its partisans work to censor the Internet"
Posted by Angelo Agathangelou at 10:18 pm No comments: Links to this post

Super MHRA Bettina Arndt says males should regularly tamper with their balls – to prevent lives being lost through undetected testicular cancer.
Read more »
Posted by Angelo Agathangelou at 6:30 pm No comments: Links to this post

Gilad To Gaza - The Spirit Of Trane

gutesachen: To the People of GAZA + their RIGHT CAUSE – there is a WAR! 1st day of the March for the RIGHT of RETURN, border of the Gaza Strip, Palestine.

The Wife Of Bath

By Eva Barb: The Wife of Bath is, arguably, the most notorious of Geoffrey Chaucer’s pilgrims in his unfinished work, The Canterbury Tales (1387)—consisting of 116 tales and narrated by 29 distinct pilgrims. The generally accepted notion among scholars is that Jankyn (the Wife’s fifth husband) and his book, The Book of Wicked Wife (an anthology of women-on-men violence), is misogynist. On the contrary, Jankyn’s book is a collection that narrates male victimization, violence against men, and misandry. 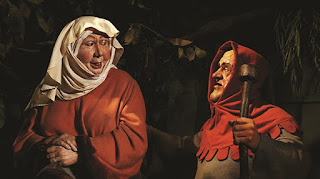 The Wife is a skilled cloth-maker, self-identified nymphomaniac, and an out-spoken, dressed-for-battle veteran of a traveler who has been analyzed in light of psychoanalytic theory, feminism, Marxism and queer studies. Despite feminist scholars who celebrate the Wife of Bath as the representation of resistance to Church-imposed patriarchy, her qualities (feminist and anti-feminist alike) are violent and destructive.
Most importantly, they revolve around a systematic manipulation of men into subhuman positions of silence. Using the instance of the Wife’s assault on Jankyn as the premise for this analysis, I interrogate the erasure of male victimization that occurs in the Wife’s Prologue as well as a similar, but more damning, omission of these narratives throughout the critical history of The Canterbury Tales.

Stealthy and deadly, “Musta’ribeen” (Jewish Israeli undercover agents) have been a threat to Palestinians since before the Jewish State was created. Today they pose a particular challenge as they infiltrate protests and coordinate actions with the army – but Palestinians are onto them. 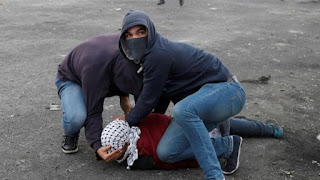 By Linah Alsaafin: They are dressed like Palestinian protesters, speak with the same accents and expressions, and show the same mannerisms. Their faces covered with checkered keffiyehs or balaclavas, they chant against the Israeli army and sometimes throw stones in the direction of the soldiers, all while drawing in other protesters as they get closer and closer to the army.
Then, quick as a bang, the scene erupts, and this group suddenly turns on the rest of the Palestinian protesters, brandishing guns that were concealed under their shirts, firing in the air, grabbing those nearest to them and wrestling them to the ground.
The army advances and takes into custody the Palestinians that were caught, as the rest of the protesters disperse, screaming out one word as a warning to others: “Musta’ribeen!”

Read more »
Posted by Angelo Agathangelou at 8:29 am No comments: Links to this post

Ex-CIA, and Intel. Officers Appeal to Ecuador in Support of Assange Washington, DC, April 4, 2018 – John Kiriakou, the former CIA counterterrorism officer and former senior investigator, US Senate Foreign Relations Committee, hand delivered a letter today in support of WikiLeaks Editor and Chief Julian Assange to the Ecuadoran Ambassador to the United States. The delivery and personal appeal was documented on video above.

"#MeToo Movement Is A Blatant Attack On Men"

Voltaire
Posted by Angelo Agathangelou at 12:02 am No comments: Links to this post