If Americans Knew
Posted by Angelo Agathangelou at 10:07 pm No comments:

Men's Rights To Blame For Alek Minassin According To CBC

Typhonblue: Of course the group of people that tells young men to not hang all of their sense of self on female approval is to blame for a young man turning violent (allegedly) out of social isolation because he couldn't get female approval.

This Video Was Too Embarrassing For The Jewish State Israel

Armed Jewish Israeli Death Forces IDF
fleeing from kids with stones.
Gilad Atzmon: I just learned from youtube that it blocked an old video of Israeli soldiers running for their lives   once faced with Palestinian opposition (kids with stones). It must have been  too humiliating for the 'regional superpower' to witness how weak it is in reality. Copyright issue was the excuse.
Posted by Angelo Agathangelou at 4:00 pm No comments: 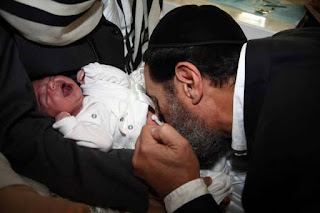 Left: Photo of a Jewish witch doctor who having genitally mutilated this baby boy by ripping off over 60% of the highest concentration of pleasure sensors from his penis as a form of sexual control, is now sucking the baby boy's bloody mutilated penis in public even while the baby is still screaming in agony and suffering the effects of shock.

By Mike Buchanan, J4MB: Our thanks to Patrick Smyth for retweeting this. Extracts from the piece:


Denmark’s ruling Liberal Party has come out against a ban on the circumcision of young boys, meaning the controversial citizen’s proposal is unlikely to make it through parliament.
“It has been difficult today, and if we had taken the easy route, we would have said ‘yes’ to a ban,” the party’s group chairman, Søren Gade, told the Berlingske newspaper after a long-drawn out meeting of party MPs to discuss the issue on Tuesday. [J4MB: What a liar. The easy route was to say “no” to a ban, so that’s what these spineless politicians did.]

Submitted by Bill Blain: Let’s not worry about US stocks dancing around the 200 day moving average, or Deutsche Bank’s miserably miserable (anticipated) results, or the 3.01% US treasury yield (only some 90 bp lower than Greece (and yes I know they are different currencies, but that’s not the point!) And, yes, the main news today will be whatever ECB head Draghi says. Don’t expect any insights into the disturbing signals of European slowdown, but prepare for the usual kick-ra-can-down-the-road obstification about when rates are going to rise. Yawn.
Instead, let’s start with credit where credit is due.
Last night I was at the 20th Birthday Party for the UK Debt Management Office. Founded by Gordon Brown on April 1st 1998, the small and highly professional DMO staff raised nearly £150 bln for the UK last year, prompting Chancellor Philip Hammond to wonder if this made them the most productive workers in the UK? I suppose it’s no wonder my old friend, reformed banker and head of the DMO, Sir Robert Stheeman, did the maths and idly pondered: since they raise something like £800,000 for the UK every minute, perhaps its time to ask for commission based pay packages for his staff? 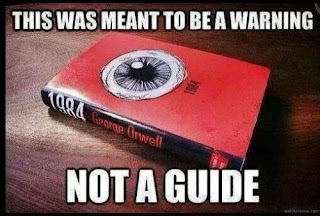 By Jeremiah Johnson: For those who have read “1984” by George Orwell, it is almost prophetic in its depth and accuracy. The reason that the warning has not been heeded is that change takes place with glacial slowness. Sometimes the changes take so long they dull the senses and we become inured to “more bad news,” or we just discount it continually. No matter what our reaction, the march toward global totalitarianism proceeds, with or without our consent or even our attention.
The slow march is deliberate. The reason for this is simple. The generation/group of people between the ages of approximately 40 to 60 are of an age who still have a sense of nationalism and grew up/experienced their formative years without that complete socialist indoctrination inflicted upon the youth of today. For the youth, there is no escape from it on their own, because they have no point of reference with which to identify and compare it to what has been forced upon them now by indoctrinators (termed “educators”). The new “all for the communal hive” mentality has been crafted by those in power and carried out by teachers.
So, a deliberate and systematic “ratcheting” up and down of the speed Wcof changes (the institution of new totalitarian controls) varies.

Read more »
Posted by Angelo Agathangelou at 8:18 am No comments:

Are you against extremism, Neo Nazis, and pedophilia? Then you should support censorship on platforms like YouTube ... or at least that's what the corporate state is trying to trick you into thinking.

Read more »
Posted by Angelo Agathangelou at 5:32 am No comments:

The Empire Is Obsessed with Perverse Types Of Punishment
By Andre Vltchek: Western culture is clearly obsessed with rules, guilt, submissiveness and punishment.
By now it is clear that the West is the least free society on Earth. In North America and Europe, almost everyone is under constant scrutiny: people are spied on, observed, their personal information is being continually extracted, and the surveillance cameras are used indiscriminately. 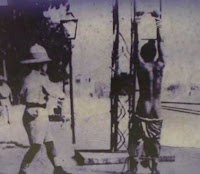 Life is synchronized and managed. There are hardly any surprises.
One can sleep with whomever he or she wishes (as long as it is done within the ‘allowed protocol’). Homosexuality and bisexuality are allowed. But that is about all; that is how far ‘freedom’ usually stretches.
Rebellion is not only discouraged, it is fought against, brutally. For the tiniest misdemeanors or errors, people end up behind bars. As a result, the U.S. has more prisoners per capita than any other country on Earth, except the Seychelles.
And as a further result, almost all conversations, but especially public discourses, are now being controlled by so-called ‘political correctness’ and its variants.
Read more »
Posted by Angelo Agathangelou at 2:46 am No comments: