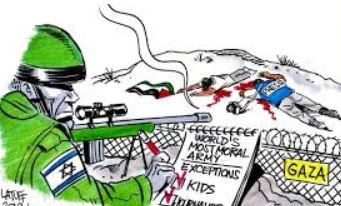 By Zeev Sternhell: Benjamin 'The Baby Butcher' Netanyahu, Anshel Pfeffer reminded us, doesn’t see the Israeli-Arab conflict as a problem in itself, but as an inseparable part of the clash of civilizations between Islam and the Western world (“The Netanyahu vision, in 467 pages,” April 18). Israel to him is the West’s spearhead in a 1,500-year-long struggle.

When his book “A Place Among the Nations” was published, I saw it as nothing more than propaganda, intended to invent an ideological cover for perpetuating the occupation sponsored by American neoconservatism in its most simplistic form. It’s too bad that good people still fall into that trap.
Netanyahu has long understood the Palestinians are incapable of resisting the occupation by force, so the occupation won’t end in the foreseeable future. But since no reality can remain for long without an ideological cover, and the biblical narrative doesn’t sell well in the United States outside evangelical circles, he cast his lot, in the spirit of the neoconservative trend of the late 20th century, with protecting Western culture.
Read more »
Posted by Angelo Agathangelou at 9:04 pm No comments: Links to this post

By Paul Craig Roberts: Beep, Beep, Beep, Beep, Beep . . . It starts at 6:30 AM and, together with numerous other stressful construction noises, goes through breakfast, lunch, cocktail hour and dinner. In south Walton county, construction crews are permitted to work from 7 AM until 7 PM six days a week Monday through Saturday. Residents miss the white construction crews. They didn’t get going until 8 AM, knocked off at 3:30 PM, and didn’t work on Saturdays But the Mexican construction crews produce non-stop construction noise 72 hours a week.
Construction noise is relentless. OSHA has added to it with beep-beeping machines. The noise, all penetrating, is very stressful. Many years ago on a large construction site a heavy equipment operator backed over a workman who, like the operator, was not paying attention. OSHA (Occupational and Safety Health Administration) mandated beep-beeps on all construction and earth moving equipment, and on all large trucks. Even some pickup trucks go beep-beep.
Noise from these trucks and equipment is pervasive. It would be interesting to know what the score is between the people killed by the stress of the noise vs. those not backed over by construction equipment and garbage trucks. One would think that today the beep-beep could be dispensed with and the problem of inattention handled by cameras. But don’t expect any logic or intelligence from OSHA. Little doubt but that the beep-beep manufacturers are a well-entrenched lobby in Washington.
In Japan there are noise ordinances that prevent real estate developers from dumping noise from their activities onto the lives of residents.

Jason Liosatos: In this show I talk about finding peace, happiness and a better world for humanity, and how it is completely normal and natural to feel despair, depression, unhappiness, exhaustion which are all natural responses and symptoms from a healthy body and mind trapped in an insane system that is driving it mad.
Posted by Angelo Agathangelou at 2:53 pm No comments: Links to this post

No Attack, No Victims, No Chem Weapons: Douma Witnesses Speak At OPCW Briefing At The Hague


RT: Witnesses of the alleged chemical attack in Douma, including 11-year-old Hassan Diab and hospital staff, told reporters at The Hague that the White Helmets video used as a pretext for a US-led strike on Syria was, in fact, staged.
“We were at the basement and we heard people shouting that we needed to go to a hospital. We went through a tunnel. At the hospital they started pouring cold water on me,” the boy told the press conference, gathered by Russia’s mission at the Organization for the Prohibition of Chemical Weapons (OPCW) in The Hague.


By Philip Weiss: Check out this stirring anthem to freedom in Gaza. It begins with a Palestinian child saying “We shall overcome” and an image of Martin Luther King Jr. and then in many still pictures of the “Great March of Return” conveys the strength of the unarmed resistance to the blockade–including the killing of Yaser Murtaja, the Palestinian journalist who was one of six Palestinian journalists shot by Jewish Israeli snipers on April 6. The imagery is by Sana Kassem, and the video was posted by Norman Finkelstein yesterday on youtube.

Read more »
Posted by Angelo Agathangelou at 9:17 am No comments: Links to this post

BBC Host Attempts To Censor The Truth About Syria

"We're there at the behest of Israel and Saudi Arabia this really isnt about helping anyone this is about money."
Jimmy Dore: A BBC guest starts telling the truth on Syria. The host tries to divert.
Posted by Angelo Agathangelou at 5:29 am No comments: Links to this post

BEN NORTON: It's The Real News. I'm Ben Norton. The City Council in Durham, North Carolina made history this month when it voted unanimously to prohibit police exchanges with Israel.

Read more »
Posted by Angelo Agathangelou at 3:09 am No comments: Links to this post

The Best Media Money Can Buy!

The Saker: Today the Russians held an extraordinary briefing and press conference at the OPCW, which featured the boy who was supposedly gassed in Douma, his father and other witnesses:
Here is the Russian language video of this 2 hour long press conference:


Read more »
Posted by Angelo Agathangelou at 12:02 am No comments: Links to this post