By Tyler Durden: As President Trump prepares for his own summit with North Korean leader Kim Jong Un, South Korean leader Moon Jae-in said U.S. President Donald Trump deserves a Nobel Peace Prize for his efforts to end the standoff with North Korea over its nuclear weapons program, a South Korean official said on Monday.
Just a few short hours after the historic first crossing south of the border by Kim to meet Moon pledging to end hostilities between the two countries and work towards the “complete denuclearization” of the Korean peninsula, Reuters reports that Moon told a meeting of senior secretaries, according to a presidential Blue House official who briefed media:


“President Trump should win the Nobel Peace Prize. What we need is only peace.”

This follows Moon's comments in January that Trump "deserves big credit for bringing about the inter-Korean talks. It could be a resulting work of the U.S.-led sanctions and pressure."

Read more »
Posted by Angelo Agathangelou at 10:05 pm No comments:

By Rick Moran: A new program at the University of Texas Counseling and Mental Health Center will promote "healthy masculinity" through "public events, educational workshops, and other forms of student involvement." 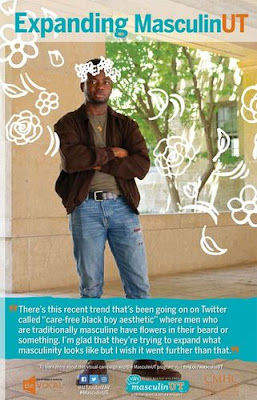 The goal is "to impact campus culture to increase acceptance of gender diversity, promote healthy relationships with an emphasis on consent, and prevent interpersonal violence."
PJ Media:
The program is predicated on a critique of so-called “restrictive masculinity.” Men, the program argues, suffer when they are told to “act like a man” or when they are encouraged to fulfill traditional gender roles, such as being “successful” or “the breadwinner.”
Though you might enjoy “taking care of people” or being “active,” MasculinUTwarns that many of these attributes are actually dangerous, claiming that “traditional ideas of masculinity place men into rigid (or restrictive) boxes [which]... prevent them from developing their emotional maturity.”

Read more »
Posted by Angelo Agathangelou at 7:38 pm No comments:

Men Are Good!: Part two looks at the deceit used by feminist in gaining huge amounts of funding for girls in schools. Our clueless legislators put their gynocentrism on steroids and voted them millions of dollars even though it was obviously boys who were more need. This trend has continued unabated.
Posted by Angelo Agathangelou at 2:39 pm No comments: 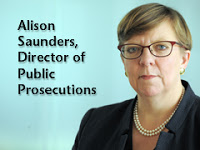 By Keiligh Baker: A man was charged with rape despite the woman involved in the case telling police that he had not committed a crime.
The man, known as Male Two, visited the woman's home with another man, Male One, and the three ended up in bed together - but the woman soon believed she was being taken advantage of.
When she shouted 'stop' Male Two stopped but Male One continued to have sex with her against her will. The woman said Male Two then pulled the other man away, a fact she told police, making it clear Male One had raped her but Male Two had not.
The Times reports that police charged the man with rape even though the woman insisted that he had committed no crime.
She told police: 'I do not believe Male Two should be charged. I do not believe he did anything wrong on the night. I am thankful that Male Two was there as without him I do not know how long Male One would have continued to have sex with me.'
The CPS had her statement but still charged both men with rape and took the case to court in January. Male Two's barrister was only made aware of the woman's statement on the first day of his rape trial.
A judge told the prosecution to review the decision to bring the case to court and it dropped the case against Male Two.
But the woman also withdrew her support for the prosecution of the man she says raped her because she no longer trusted the system.
Read more »
Posted by Angelo Agathangelou at 11:44 am No comments:

Boycotting Apartheid Israel To Become A Crime In Germany

By Annette Groth: For a number of years, Palestine solidarity groups in Germany have encountered serious obstacles when organizing events that draw attention to Israel’s human rights abuses. That is despite the fact the right to free speech is enshrined in the German constitution. 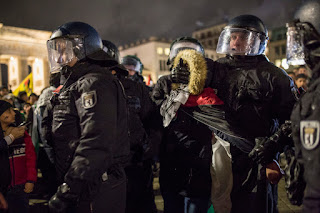 When attempts are made to prevent discussions from taking place, the allegation most often used is that organizers or participants are anti-Semites. This allegation is even applied to Jews who defend Palestinian rights. According to pro-Israel advocates, such Jews are “self-hating.”
The obstacles have been especially steep in Munich.
Ilan Pappe, an Israeli historian best known for his research into the 1948 ethnic cleansing of Palestine, was refused permission to speak at a Munich teaching center during 2009. The episode can be viewed as the first in a series of attempts made during the past decade to prevent people who criticize the official Israeli narrative from reaching a Bavarian audience.
Abraham Melzer, a well-known German-Jewish author and journalist, was the target of one such attempt.
In September 2016, Melzer was invited to speak at the One World House, a cultural center. A few days before the event was scheduled to take place, Munich’s city council intervened to forbid it.

Read more »
Posted by Angelo Agathangelou at 9:48 am No comments: 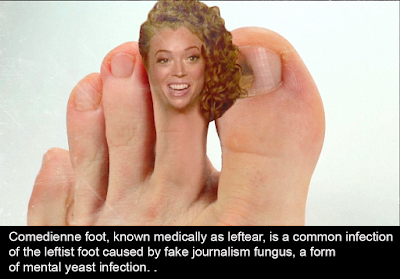 CIA Whistleblower: Trump Is Doing What Kennedy Tried To

Greg Hunter: Former CIA Officer and whistleblower Kevin Shipp says what is going on with Donald J. Trump “is an ongoing coup to remove a duly elected President.” Shipp contends, “This is a huge constitutional crisis like the country has never seen before. This makes Watergate look like a Sunday school class.”
On Friday, Shipp and other retired top officials at the CIA, FBI, DOJ and NSA held a press conference and demanded Attorney General Jeff Sessions prosecute top Obama era officials for obvious crimes against the incoming Trump Administration. Shipp says,


“We have a coup within our government right now at the senior levels at the CIA, DOJ and the FBI attempting to unseat a duly elected President 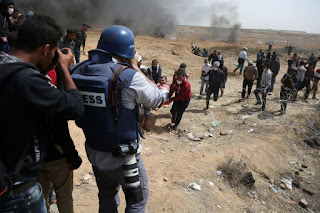 By Hamza Abu Eltarabesh: The Great March of Return series of protests have been bloody.
The Israeli military has reacted with deadly and purposeful force, killing and wounding at seemingly random. And still people have come from all over Gaza to demonstrate and protest their right of return to the lands from where they, their parents and grandparents, were once evicted.
With them we came, the journalists, watching and filming, bearing witness to the events as they transpired and talking to people to hear their stories and motivations.
For us, too, the protests have been dangerous. I was lucky to have a dermatologist father-in-law who could give me the required cream for a rash on my shoulder and abdomen that appeared hours after being exposed to tear gas on the day of the first demonstration on 30 March.
And from that relatively mundane example to the deadly, journalists have been very much in the line of fire.
So far [26th April], there have been two fatalities among those covering the protests. There have been a high number of injuries to journalists – as many as 66 over the four demonstrations held so far, according to Ashraf al-Qedra, a spokesperson for Gaza’s ministry of health – prompting calls for the protection of journalists and investigations into the violence. Human right organizations and international watchdogs like the Committee to Protect Journalists have been at the forefront of these calls.
These have had little effect on Israel’s behavior.