Barbara4u2c
Posted by Angelo Agathangelou at 8:01 pm No comments: Links to this post

A History Of Money In Palestine: The Case Of The Jews Freezing And Pillaging Palestinians' Bank Accounts In 1948

IAK: On June 12, 1948, not yet a month after the termination of the British Mandate for Palestine, the new government of the new state of Israel ordered all the commercial banks operating within its territory to freeze the accounts of all their Arab Palestinian customers and to stop all transactions on Arab accounts. The Israeli government gave the banks one month to comply with this order and threatened to revoke the banking licenses of all banks found to be in non-compliance with it. By December 1948 every bank operating in Israel had complied with the order, and thus, just six months after the termination of the Mandate for Palestine, all Arab Palestinians, many of whom were already refugees and scattered in camps throughout the world, had lost access to the money and financial assets which they had deposited for safekeeping in their bank accounts and safe-deposit boxes.

Read more »
Posted by Angelo Agathangelou at 5:56 pm No comments: Links to this post

Is Iran Really A Nuclear Threat?

Investigative journalist Gareth Porter dispels some of the myths surrounding Iran’s nuclear programme: Netanyahu and others have been crying wolf about Iran and nukes since the 1980s (including likely forging documents), while the IAEA has been declaring Tehran’s compliance; the Ayatollah has maintained that WMDs are “unIslamic,” and hasn’t used them yet (even against Iraq’s WMDs); Iran needs ballistic missiles as a deterrent since it has no air force; and it has never threatened aggression toward Israel.
By Mersiha Gadzo: “Iran is moving ‘very quickly’ towards production of a nuclear bomb and could have a weapon within two years,” the United Press International reported. 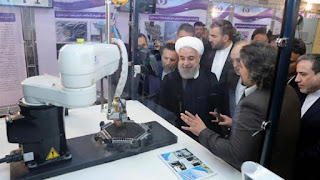 The quote was published in a 1984 article headlined “‘Ayatollah’ bomb in production for Iran” but it might as well have been published today.
For more than three decades Western politicians and the press have been claiming that Iran is a nuclear threat.
Israeli leaders Benjamin Netanyahu and Shimon Peres echoed this claim numerous times in the 1990s, warning that Iran would build an atomic bomb by the next decade.
In the fall of 2012, Netanyahu declared at the United Nations General Assembly meeting – with his infamous bomb cartoon – that Iran would be able to build a nuclear weapon by June 2013.

Read more »
Posted by Angelo Agathangelou at 3:01 pm No comments: Links to this post 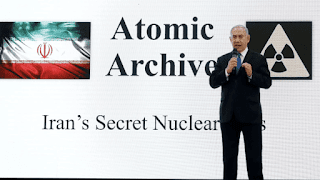 Netanyahu’s dog-and-pony show Monday disregarded the pronouncement by the IDF’s Chief of Staff Gadi Eisenkot that the Iran deal is working and will keep nukes out of Iranian hands for at least ten years.
It also lacked proof. But it did give President Trump (and Bibi’s own drooping voter base) some memorable images and catch-phrases.
And the information he presented with such urgency is old and already familiar to anyone who has read IAEA reports.
By Anshel Pfeffer: 1 Prime Minister Benjamin Netanyahu began his press conference in Tel Aviv on Monday evening at a distinct disadvantage. In his desire to discredit the Iran nuclear deal – from which President Donald Trump is expected to withdraw on May 12 – he had to clear a bar set by Israel’s security establishment over the last three years: That despite all he has said, the deal is not such a bad thing and actually serves to curb Iran’s nuclear ambitions for the time being.
Only five weeks ago, Israel Defense Forces Chief of Staff Lt. Gen. Gadi Eisenkot told Haaretz that “right now, the agreement, with all its faults, is working and is putting off realization of the Iranian nuclear vision by 10 to 15 years.”
Read more »
Posted by Angelo Agathangelou at 1:30 pm No comments: Links to this post

Why I March In Gaza

“The people in Gaza have been living
one tragedy after another.”
A young father reflects on the legacy of suffering, the need to find meaning in life and struggle, and the unity that the Great March is inspiring.

By Fadi Abu Shammalah: Early in the morning on March 30, my 7-year-old son, Ali, saw me preparing to leave the house. This was unusual for our Friday routine.
“Where are you going, Dad?” 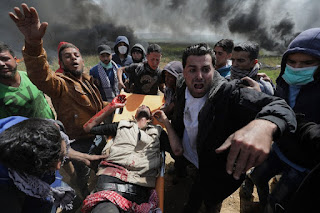 “To the border. To participate in the Great Return March.”
The Great Return March is the name that has been given to 45 days of protest along the border between Gaza and Israel. It began on March 30, Land Day, which commemorates the 1976 killings of six Palestinians inside Israel who had been protesting land confiscations, and ends on May 15, the 70th anniversary of the Nakba, the mass displacement of Palestinians during the 1948 war that lead to the creation of Israel.
“Can I come with you?” Ali pleaded. I told him it was too dangerous. If Israeli military warnings were any indication, the risk that unarmed protesters might be shot by Israeli snipers was too high. “Why are you going if you might get killed?” Ali pressed me.

Read more »
Posted by Angelo Agathangelou at 10:54 am No comments: Links to this post

Some Families Are Better Than Others For Children

Bettina Arndt with Manhattan Institute scholar Kay Hymowitz speaking at the 2015 Festival of Dangerous Ideas (FODI) on why some families are better than others for children. Bettina was actually second speaker at the event, hence her references to Kay's speech.

Netanyahu: Don’t Look Here Where We Jews Are Shooting Little Goy Children, Look Over There At Iran

Why is 'Baby Butcher' Netanyahu in a panic about Iran’s potential to develop a weapons program? - it’s old news, and all evidence points to Iran’s compliance. But a nice, juicy war would distract the world from Israel’s ethnic cleansing of Palestinians as they peacefully demonstrate against the occupation and blockade, and wait for their 1948 right of return.

By Juan Cole: Israeli Prime Minister Binyamin 'Baby Butcher' Netanyahu, a notorious warmonger, serial liar and supremacist racialist who used to lead the closest thing Israel has to a fascist party until parties even more extreme got elected to parliament, is attempting to bamboozle the clueless Trump into getting on a war footing with Iran.
Netanyahu’s breathless announcement that there was a potential weapons aspect to Iran’s nuclear enrichment program has been known for a decade and a half.
Netanyahu even seems to have provoked the White House to issue a communique falsely stating that Iran has a weapons program presently, which it promptly had to retract. The incident is so scary because it shows how easy it is to manipulate the erratic Trump and his not-ready-for-prime-time staff.

Read more »
Posted by Angelo Agathangelou at 3:13 am No comments: Links to this post

The Verdict Is In: We’re All Bill Cosby Now 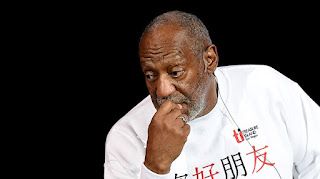 By Paul Elam: OK, the verdict is in and Bill Cosby is guilty of three counts of sexual assault. And we now await sentencing, where the current take is that we will hear, in one form or another, how America’s Dad will spend the rest of his life behind bars.
The #MeToo and #TimesUp crowd is jumping for joy, and undoubtedly a slew of Cosby’s alleged victims are lining up to take aim at pillaging his estate. I can just see them all, jumping up and down like first-graders at the ice cream truck, screaming Me too! Me too!
Gynotrads, too, will be getting their jollies; basking in what they imagine is schadenfreude as Dr. Huxtable is tossed into a small cage to live what will undoubtedly be a much shorter version of what remains of his life. Such is what he deserves, right? He harmed all those women, and now he has to pay.
At least that’s the point of view of those dumb enough to be blue pill; people whose thinking is guided by hash tags and other popular slogans of sexual politics.
And mind you I have to say that I am not exactly bleeding sympathy for old Bill. Whether he committed actual sexual assault aside, it is clear that over decades of life he was a completely dedicated pussy hound; a gynocentrist of the first order, driven to arrange his life around women. That alone is begging for problems, never mind the abandonment of self and values that come with the territory. Guilty or innocent of the criminal charges, Cosby’s own petard blew up in his face.