The Huge Fraud Behind Our Stock Market

Written and performed by Americans, in America covering American news.
Posted by Angelo Agathangelou at 10:14 pm No comments: Links to this post

Victims Of Their Own Suck-Cess

Turd Flinging Monkey
Posted by Angelo Agathangelou at 8:19 pm No comments: Links to this post

Letter From Iran: Mr. Trump, You Have Been Served

By Pepe Escobar: In a letter addressed to President Donald Trump, with copies to the International Criminal Court (ICC) and the UN Security Council, four top former officials at the highest level of the US government have given him legal notice about his duty to advise the US Congress, the ICC and the UNSC, among others, about Israel’s actions coinciding with the “70th anniversary of the expulsion of 750,000 Palestinians from their homes.”
The letter is signed, among others, by former CIA operations officer Phil Giraldi; former Pentagon official Michael Maloof; former US Army officer and State Department coordinator for counterterrorism contractor Scott Bennett; and former diplomat and author of Visas For al-Qaeda: CIA Handouts That Rocked The World, Michael Springmann.
Maloof, Bennett and Giraldi, as well as Springmann and this correspondent, were among guests at the 6th International New Horizon conference in the holy city of Mashhad, eastern Iran. The top themes of the conference’s debates were Palestine and the Trump administration’s unilateral exit from the Iran nuclear deal, known as the Joint Comprehensive Plan of Action (JCPOA).

Read more »
Posted by Angelo Agathangelou at 5:45 pm No comments: Links to this post

Profound poverty and injustice drove 14-year-old Wesal to depression and a longing to be “with God.” She felt compelled to attend the border protests in Gaza every Friday. After Israeli snipers killed her, Wesal’s family understands her passion to resist the crushing occupation and blockade; she has inspired them to join the resistance. 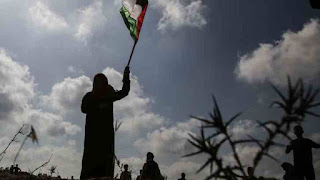 By Oliver Holmes and Hazem Balousha: The family of Wesal Sheikh Khalil say that in a matter of weeks the teenager experienced a complete transformation, from a hop-scotching child to an adolescent infuriated by injustice in Gaza.
“You are cowards,” she screamed at her aunts when they refused to join protests at the border, where health officials say Israeli forces have killed more than 110 and shot thousands since demonstrations began in late March.
Her immediate family, impoverished even by the coastal enclave’s dire standards, had been unengaged in politics. Wesal and her 11-year-old brother were the only ones who trekked weekly to the perimeter, into the surging crowds and the black smoke of burning tyres. Their siblings tried to stop them, but they would sneak out.
“She kept saying: ‘You have to go. You have to go,’” recalled one aunt, Ahlam, 30. “She was the most dedicated of all of us.”
Wesal, 14, was shot dead on Monday, one of more than 60 people killed as Israeli snipers fired on protesters.

Max and Stacy discuss all heck breaking loose in emerging market currencies as the Fed tries to taper a ponzi and a parallel currency being proposed for Italy’s ruined economy. In the second half, Max interviews Marshall Long of EOS.fish about bitcoin mining, from the claims of environmental catastrophes to the assertions that miners are losing money at current bitcoin prices. They also discuss EOS and why it’s better than Ethereum.
Posted by Angelo Agathangelou at 1:25 pm No comments: Links to this post

Larken Rose: A video about the concept of "homesteading," and the rational, moral way to deal with natural resources and ownership.
Posted by Angelo Agathangelou at 10:38 am No comments: Links to this post

Jimmy Dore:
A stunningly ridiculous infographic paints children as terrorist.
Posted by Angelo Agathangelou at 7:23 am No comments: Links to this post

"Even the nuclear policy of Israel has a biblical name:
the Samson Option"
Βy Laurent Guyénot: The biblical mind of Israel’s founding terrorists
The Hebrew Bible (Tanakh) is for the committed Jew as much a record of his ancient origins, the prism through which all Jewish history is interpreted (is not the “Holocaust” a biblical term?), and the unalterable pattern of Israel’s promising future. That is why the Bible, once the “portable fatherland” of the Diaspora Jews as Heinrich Heine put it, remains at the core of the national narrative of the Jewish State, whose founding fathers did not give it any other Constitution.

It is true that the earliest prophets of political Zionism — Moses Hess (Rome and Jerusalem, 1862), Leon Pinsker (Auto-Emancipation, 1882) and Theodor Herzl (The Jewish State, 1896) — did not draw their inspiration from the Bible, but rather from the great nationalist spirit that swept through Europe at the end of the 19th century. Pinsker and Herzl actually cared little whether the Jews colonized Palestine or any other region of the globe; the first thought about some land in North America, while the second contemplated Argentina and later Uganda. More important still than nationalism, what drove these intellectual pioneers was the persistence of Judeophobia or anti-Semitism: Pinsker, who was from Odessa, converted during the pogroms that followed the assassination of Alexander II; Herzl, at the height of the Dreyfus affair.
Nevertheless, by naming his movement “Zionism,” Herzl himself was plugging it into biblical mythology:

Read more »
Posted by Angelo Agathangelou at 3:57 am No comments: Links to this post

China’s Only Danger: A ‘Generation X’ Who Believes They Aren’t Communist

By Ramin Mazaheri: When you have a world war, there is no question: We are all living in a postwar world. However, not all subsequent generations have been shaped the same.
In debunking the standard view of the Cultural Revolution in this series – and also showing that, when it came to politics and non-musical revolutions, John Lennon was the status-quo company man and Mao was the real rock ‘n roller – we see that China’s mid-1960s revolution succeeded even though parallel cultural upheavals failed to produce the nearly-identically desired systemic changes across the West.
Because China was seemingly the only 1960s revolution which actually succeeded in rebooting their political system, we are faced with a question to which the Western postwar experience doesn’t really apply: How will China’s post-1960s generations develop, and then lead society?
We all know what followed the West’s political failures of the 1960s:
Baby Boomers have proven to be totally incapable of taking the torch from their “Greatest Generation”. The Clintons, Dubya Bush, Obama and Trump are synonymous with corruption, hypocrisy and stupidity, and both America’s 99% and the rest of the world is unhappily living under their most inglorious reign. That’s not my opinion – just talk to any Westerner and they are totally dissatisfied with their systems, except for the tiny Nordic countries, but they have been conditioned to believe TINA (There Is No Alternative) and are too underpaid to have time to be involved with political alternatives.
The children of Baby Boomers became known as “Generation X”, who became disillusioned, navel-gazing and appallingly apathetic to all things political.