Kairos Statement On Gaza And Jerusalem

Kairos Palestine, a Christian Palestinian movement, calls on Christians around the world “to be the conscience of humanity and hear the cry of the oppressed in the Holy Land,” to call for the end of oppression, occupation, and violence.
From Kairos Palestine:"If thou seest the oppression of the poor, and violent perverting of judgment and justice in a province, marvel not at the matter: for he that is higher than the highest regardeth; and there be higher than they” (Ecclesiastes 5:8).. 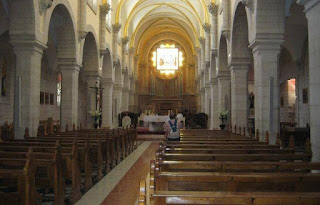 On Monday, May 14th 2018, in Gaza, 60 people were killed and 2771 wounded among crowds walking unarmed towards their villages, from which they had been compelled to leave. They were killed in cold blood and posed no threat to anybody.


At the same time, the American embassy was relocated to Jerusalem in violation of international law. The transgressor is the great power that should call on others to respect international law.
Thus, the situation in which we are living is not one of rejoicing and the inauguration of a new embassy. We live in an inhumane situation that must be changed.
The siege on Gaza, on two million people living on land of merely 380 km², must be lifted. The West Bank must be liberated and the people in it regain their freedom and complete equality must be ensured for all inhabitants of the land.
Read more »
Posted by Angelo Agathangelou at 10:56 pm No comments: Links to this post

Corbett: The Trojan horse was the earliest recorded military psyop. That psyop continues to be deployed on unsuspecting populations and it is just as useful as ever, but today's tricksters have donned the mantle of philanthropy, and their Trojan horses are not wooden statues but non-governmental organizations offering "aid" to foreign nations. We'll learn about how NGOs are the deep state's Trojan horses.
Posted by Angelo Agathangelou at 8:20 pm No comments: Links to this post

“Is Masculinity in Crisis?” Feminist BBC, The Big Questions

Mike Buchanan, Justice for Men and Boys: On the Sunday before last I was in a discussion on the BBC’s The Big Question, their flagship TV programme in which a panel of people debate topical affairs. The topic being debated was, “Is masculinity in crisis?” The nine men on the panel started with a young mangina with nail varnish on the extreme left. He lives as a man for half the week, as a woman the other half. He makes a living from performing as a drag queen. A fine example of modern British masculinity, then.

Read more »
Posted by Angelo Agathangelou at 4:53 pm No comments: Links to this post

Racism Is A Spectrum

Finntronaut
Posted by Angelo Agathangelou at 2:50 pm No comments: Links to this post

By Mike Buchanan, J4MB: Hidden in this gem of an article, in which The Who’s Daltrey also attacks Jeremy Corbyn’s radical politics and discusses the idiosyncratic success of a marriage on unusual terms, are the following (utterly correct) comments on #MeToo: 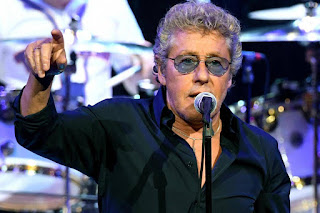 “Why would any rock star need to push themselves on women?” he said. “Usually, it’s the other way around. I’d like to have £1 for every woman that screws my ass. Mick Jagger would be a billionaire out of it.
“If it was going to be in the rock business, it would’ve been out by now. It would’ve been out a long time ago,” he added. “I find this whole thing so obnoxious. It’s always allegations and it’s just salacious crap.”
Cheers, sir!

'Basically, what had happened is that the most-preferred of all the candidates got deep-sixed by Democratic Party billionaires' 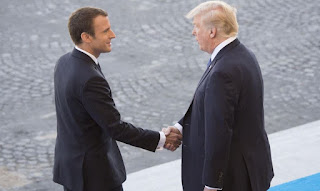 By Eric ZUESSE: What killed democracy was constant lying to the public, by politicians whose only way to win national public office is to represent the interests of the super-rich at the same time as the given politician publicly promises to represent the interests of the public — “and may the better liar win!” — it’s a lying-contest. When democracy degenerates into that, it becomes dictatorship by the richest, the people who can fund the most lying. Such a government is an aristocracy, no democracy at all, because the aristocracy rule, the public don’t. It’s the type of government that the French Revolution was against and overthrew; and it’s the type of government that the American Revolution was against and overthrew; but it has been restored in both countries.
First here will be discussed France:
On 7 May 2017, Emmanuel Macron was elected President of France with 66.1% of the vote, compared to Marine Le Pen's 33.9%. That was the second round of voting; the first round had been: Macron 24.0%, Le Pen 21.3% Fillon 20.0%, Melenchon 19.6%, and others 15%; so, the only clear dominator in that 11-candidate contest was Macron, who, in the second round, turned out to have been the second choice of most of the voters for the other candidates.
Read more »
Posted by Angelo Agathangelou at 10:06 am No comments: Links to this post

Washington Post: Mehdi Hasan, host of the Intercept podcast 'Deconstructed,' says the violence in Gaza and the pageantry in Jerusalem on May 14 are fueled by the same thing: Israel's occupation of Palestinian territories.
Posted by Angelo Agathangelou at 3:02 am No comments: Links to this post

Sixty Dead In Gaza And The End Of Jewish Israeli Conscience

'This is the end of conscience, the show of morality is over. The last few days' events have proved it decisively. The tracks have been laid, the infrastructure for the horror has been cast. Dozens of years of brainwashing, demonization and dehumanization have borne fruit.'
By Gideon Levy: When will the moment come in which the mass killing of Palestinians matters anything to the right? When will the moment come in which the massacre of civilians shocks at least the left-center? If 60 people slain don't do it, perhaps 600? Will 6,000 jolt them? 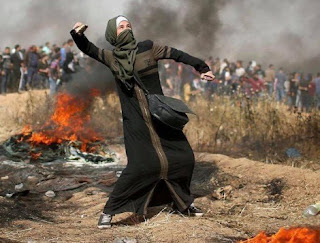 When will the moment come in which a pinch of human feeling arises, if only for a moment, toward the Palestinians? Sympathy? At what moment will someone call a halt, and suggest compassion, without being branded an eccentric or an Israel hater?
When will there be a moment in which someone admits that the slaughterer has, after all, some responsibility for the slaughter, not only the slaughtered, who are of course responsible for their own slaughter?
Sixty people killed didn't matter to anyone - perhaps 600 would? How about 6,000? Will Israel find all the excuses and justifications then also? Will the blame be laid on the slain people and their "dispatchers" even then, and not a word of criticism, mea culpa, sorrow, pity or guilt will be heard?

A lesson in feminine poise and grace.
Read more »
Posted by Angelo Agathangelou at 12:02 am No comments: Links to this post