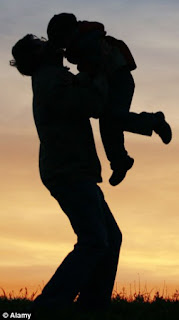 The devastating financial – and human – cost of our fatherless society
By Peter Hitchens: By the end of his or her childhood, a British boy or girl is much more likely to have a TV set in the bedroom than a father at home.


Our 45-year national war against traditional family life has been so successful that almost 50 per cent of 15-year-olds no longer live with both their parents.
At the same time we have indulged our neglected and abandoned young with electronics, so that 79 per cent of children aged between five and 16 have a TV in their room.


As we soppily mark ‘Father’s Day’ with cards, socks, sentimentality and meals out, we should remember that in almost all cases the absent parent is the father. There is no doubt about the facts here. Let me list some of them.
The cost of our wild, unprecedented national experiment in fatherlessness is now £49 billion each year – more than the defence budget.

'The State spends billions, and intervenes incessantly, to try to replace the lost force of fatherhood, and it fails.'
Read more »
Posted by Angelo Agathangelou at 11:18 pm No comments: Links to this post

"The history of WW II is incorrect ... it glorifies the victors and demonizes the vanquished ... Irving’s histories are far more accurate than those written by court historians ... (who) teamed up with Zionists to smear and demonize the best historian of our time."
By Dr. Paul Craid Roberts: Ron Unz is one of the best men of our time. He searches for truth and he supports others who do the same. In this article, he comes to the defense of David Irving, the best historian of the 20th century.http://www.unz.com/announcement/the-remarkable-historiography-of-david-irving/ 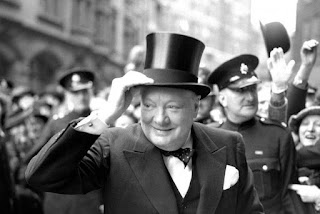 Churchill's career was funded by wealthy Jews who wanted war with Germany. Why do popular films and biographies hide this shocking fact?
Zionists destroyed David Irving’s livelihood with slander and libel, because he made public a letter from the former chancellor of Germany, Hitler’s predecessor, to Winston Churchill, a letter that Irving found in the American publisher’s file of Winston Churchill’s history of the war, and which the publisher prevented Churchill from publishing in his history.

Max and Stacy discuss Treasury bill yields, FAANG shares and stock market ‘crash insurance with an expiration date.’ In the second half, Max and Stacy continue talking about Facebook and their plan to introduce advertising to WhatsApp, despite their 2014 promises not to do that. They also discuss Kim Dotcom’s call for competitors to Twitter and Facebook. Stacy ditches Twitter for Minds.com and Max recounts a story from Times Square.
Posted by Angelo Agathangelou at 5:44 pm No comments: Links to this post

Israel Is Not A Democracy 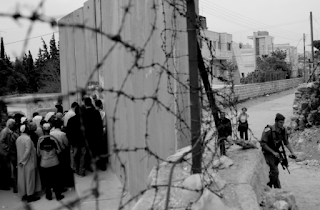 By lan Pappe: Israel is not the only democracy in the Middle East. In fact, it's not a democracy at all.
In the eyes of many Israelis and their supporters worldwide — even those who might criticize some of its policies — Israel is, at the end of the day, a benign democratic state, seeking peace with its neighbors, and guaranteeing equality to all its citizens.
Those who do criticize Israel assume that if anything went wrong in this democracy then it was due to the 1967 war. In this view, the war corrupted an honest and hardworking society by offering easy money in the occupied territories, allowing messianic groups to enter Israeli politics, and above all else turning Israel into an occupying and oppressive entity in the new territories.
The myth that a democratic Israel ran into trouble in 1967 but still remained a democracy is propagated even by some notable Palestinian and pro-Palestinian scholars — but it has no historical foundation.

Israel Before 1967 Was Not a Democracy
Read more »
Posted by Angelo Agathangelou at 1:03 pm No comments: Links to this post 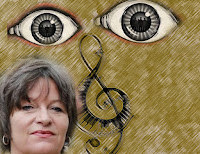 'If liberty can be defined as the right to offend, Britain has voluntarily removed itself from the free world.'
By Gilad Atzmon: The Jewish Chronicle seems dismayed that the singer-songwriter Alison Chabloz has escaped jail time, at least for the time being. But the message conveyed by Ms. Chabloz’s conviction is devastating for Britain. This kingdom has, in just a short time, become a crude authoritarian state.
For posting so-called ‘grossly offensive songs’ on the internet, Chabloz was sentenced by District Judge John Zani to 20 weeks imprisonment suspended for two years. It seems that now music is deemed a major threat to Britain.
Chabloz was also banned from posting anything on social media for 12 months. I am perplexed. What kind of countries pre-vet social interaction and intellectual exchange? Israel imposes such prohibitions on its Palestinian citizens. Soviet Russia banned certain types of gatherings and publications and, of course, Nazi Germany saw itself qualified to decide what type of texts were healthy for the people and actively burned books.  I guess that Britain is in good company.
Chabloz was further “ordered to complete 180 hours of unpaid work.” This amounts to something in the proximity of 90 Jazz gigs. And Chabloz is required to attend ‘a 20-day rehabilitation programme.’ In 21st century Britain,  a singer songwriter has been sentenced to ‘re-education’ for singing a few tunes that offended some people.

The End Of Judicial Impartiality: Feminists Come For Judges

StudioBrule: It was said to be a test of the political power of the #MeToo movement: the campaign to recall Judge Aaron Persky for his supposedly lenient sentence in the Brock Turner, Stanford University sexual assault trial. Now Judge Persky has been removed from the bench and replaced by a woman.

Yet again, Nikki Haley puppets the Israeli narrative – “the UN is always picking on Israel,” “condemn Hamas” – standing nearly alone against world opinion. Not only did the resolution condemning Israel pass, but the amendment condemning Hamas failed to pass. Score one more for justice. Here's some hasbara on the subject:
By Amir Tibon and Reuters, Ha’aretz: The UN General Assembly passed a resolution Wednesday night condemning Israel for excessive use of force against Palestinian civilians and proposing forming an international protection mechanism in Gaza. 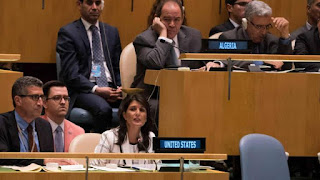 The resolution is not expected to lead to action against Israel since any attempt to bring such a decision to the Security Council is expected to be met with a U.S. veto.
The resolution passed with 120 countries in favor, eight against, and 45 abstaining. It was put forward in the General Assembly by Algeria, Turkey and the Palestinians.
U.S. Ambassador to the UN Nikki Haley criticized the General Assembly for discussing the situation in Gaza instead of the crises in Nicaragua, Yemen and Burma.

Read more »
Posted by Angelo Agathangelou at 2:42 am No comments: Links to this post

Suffragette Myth That Turns Men Into The Enemy

By Belinda Brown: As thousands took to the streets last Sunday to commemorate the centenary of votes for women, many held banners calling for the ‘battle’ to continue. The battle referred to was that of the suffragettes, the gender freedom fighter heroines today’s young women are taught uncritically to believe in.
‘Fight like a Girl’ read one placard read. ‘Deeds, not words’ said another, echoing the slogan of the suffragettes, who were responsible for 337 acts of arson or bombing during 1913 and 1914.
Nothing, from Hollywood’s outpourings to the constant BBC tributes to the suffragettes, seems ever to be said to disabuse young women of the suffragettes’ virtues. Nothing is told them of the real heroines – and the men who helped them – the quite different, peaceful and effective suffragist campaign.
So three cheers for Man on Fire and the Daily Mail which today have published my account of the history of the campaign for women’s rights – one that I believe is accurate and sets the record straight:
‘The real action did not lie with the suffragettes and their shameful violence. It lay with another group of women, the suffragists led by Millicent Fawcett, and their collaboration with men in the Labour party.