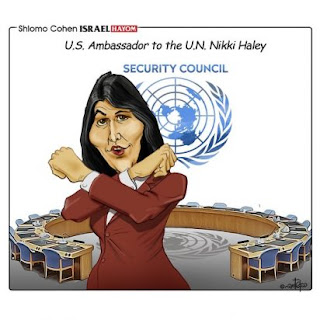 An unnamed source has indicated that the US’ threatened departure from the UN Human Rights Council is now “imminent.” Nikki Haley has been nearly alone in her condemnation of the elected representatives of the people the Jewish state has imprisoned the indigenous Palestinian Semites Hamas and endorsement of Israeli Death Forces IDF violence during the Great March of Return, and has accused the body of having a “chronic anti-Israel bias” for a year.
From Reuters, Ha’aretz: Talks with the United States over how to reform the main UN rights body have failed to meet Washington’s demands, activists and diplomats say, suggesting that the Trump administration will quit the Geneva forum whose session opens on Monday.
A U.S. source, speaking on condition of anonymity, told Reuters the withdrawal appeared to be “imminent” but had no details.

Read more »
Posted by Angelo Agathangelou at 10:02 pm No comments: Links to this post

Are Nerdy Men Hated For Non-Mainstream Shopping Habits? A Response To Rachael Lefler 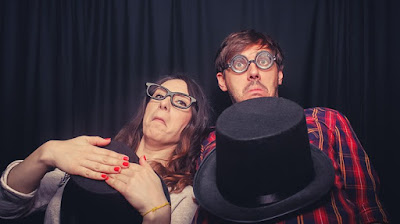 By YetAnotherCommenter: Introduction
Rachael Lefler recently wrote an article for A Voice for Men which proposed an explanation for why feminists seem so hateful towards “geek” or “nerd” culture. In other words, Lefler is trying to come up with a theoretical explanation for what Mytheos Holt called “The #WarOnNerds“.
The #WarOnNerds, at least as a broad phenomenon, is ultimately what led to my own red-pilling and fall down the proverbian Rabbit Hole. Geeky men are indeed considered enemies by the official feminist movement (indeed, the way Incels are now being targeted seems like the next phase of this campaign). As the feminist #WarOnNerds is my primary empirical interest within gender politics, I will be commenting on Lefler’s theory.
Explaining the #WarOnNerds is not an easy thing to do. Perhaps the best explanation so far was proposed by Mytheos Holt; Holt argued that the #WarOnNerds was ultimately a reaction by the Clerisy (the established media, academic/intellectual and artistic/cultural classes) against the subculture which created the internet and thus deeply damaged their ability to control the broader culture whilst simultaneously smashing their profits.

Read more »
Posted by Angelo Agathangelou at 5:01 pm No comments: Links to this post

Instead of corporate media basically ignoring the UN report, there should be screaming headlines.
By John M. Repp: Philip Alston is the UN special rapporteur on extreme poverty and human rights. He traveled to the United States last December to some of our most destitute communities such as Skid Row in LA, poor African American areas in the Alabama, impoverished coal communities in West Virginia and to Puerto Rico. He issued his report on June 1, 2018. It should be front page news.

The report is a terrible indictment of our country and of the Trump Administration. Joseph Stiglitz, a Nobel prize winning economist told The Guardian “This administration inherited a bad situation with inequality in the U.S. and is now fanning the flames and worsening the situation.

Cyclonious
‘Invasion Day’
from the album 'The Revival'.
Posted by Angelo Agathangelou at 11:45 am No comments: Links to this post

Lee Camp speaks with Abby Martin, who exposes the profit-driven bias of corporate media reporting on Venezuela. Then, he sits down with the hosts of Watching The Hawks to discuss their recent trip to Australia. 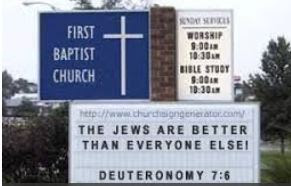 Likud's MK Miki Zohar says Jews are the smartest in the world, so know Netanyahu isn't corrupt
By Stuart Winer: A lawmaker from the ruling Likud party said Wednesday that the “Jewish race” is the smartest in the world and possessing of the “highest human capital,” which is why, he said, the Israeli public did not buy into the allegations of wrongdoing by criminally insane racist psychopath Prime Minister Bibi 'the Baby Butcher of Gaza' Netanyahu.


MK Miki Zohar made the comments during a radio debate with veteran political journalist Dan Margalit about the corruption investigations in which Netanyahu is either a suspect or has given testimony.


His assertions led to a Twitter spat with Joint (Arab) List party MK Ahmad Tibi, who noted Nazi Germany’s treatment of Jews as a race during the Holocaust.


Citing recent opinion polls that show Netanyahu enjoying strong support despite being a suspect in three graft investigations, Zohar argued that the media focus on the probes has not convinced the Israeli public that the prime minister is unsuited to lead the country.

Being Straight Is A Choice

Shoe0nHead:
Welcome to radical feminism.
Read more »
Posted by Angelo Agathangelou at 2:54 am No comments: Links to this post

How To Bake A Wedding Cake

Brother Nathanael
Posted by Angelo Agathangelou at 12:27 am No comments: Links to this post