Is It Zionism Or Jewishness? You Decide

Is it Zionism or actually Jewish ideology that drives the barbarism of the state that calls itself  “the Jewish State”?
By Gilad Atzmon: In the early 2000s I realised that if Israel defines itself as the Jewish State, we must first ask who are the Jews, what is Zionism, what is Jewishness and how these notions relate to each other and affect Israeli politics, Jewish political lobbying, Jewish pressure groups and so on.
No one in Israel has ever criticized my argument. Israelis are naturally intimately familiar with the above notions. Israelis know that Jewishness and Jewish culture are at the core of Israeli politics.

Read more »
Posted by Angelo Agathangelou at 10:14 pm No comments: Links to this post

Posted by Angelo Agathangelou at 7:42 pm No comments: Links to this post

Max and Stacy discuss the economic and financial landscape as America heads into midterm elections, normally won by the party not in power, but what could 2018 hold for the United States of Inequality? When so many rich people think the apocalypse is coming and they are preparing for it with doom shelters, what to make of the rapidly rising wealth and income gap? They also discuss how Jeff Bezos became the richest man in modern history, gaining $275 million per day in 2018 in net worth.
Posted by Angelo Agathangelou at 3:26 pm No comments: Links to this post

US Senate About To Vote On Bill To Give $38 Billion To Israel, Largest Aid Package In US History

Although the lame stream media isn’t telling Americans, a bill to give Israel a massive aid package is before Congress. The Senate, where it has 72 sponsors, is expected to vote on it this week. The bill also mandates that NASA work with Israel’s space agency, despite charges of Israeli espionage. 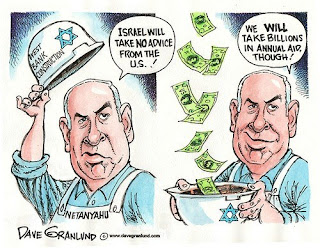 IAK: Jewish Insider reports that the U.S. Senate is expected to vote this week on a $38 billion aid package to Israel. This would be largest military aid package in American history (text and sponsors below).
The money, which would be given to Israel over the next 10 years, is the equivalent of $23,000 for each Jewish Israeli family of four.


[To take action on this go here]
The bill has moved forward despite the fact that most Americans already feel the U.S. gives Israel too much money.
The bill also requires NASA to work with the Israel Space Agency, despite accusations of Israeli espionage