Ironically, the anonymous female accuser also claimed that Kimmel told her she would have to work harder for equal recognition because she was an attractive woman.
Kimmel denies the accusations, stating “I’ve spent my entire career advocating for gender equality, and believe I have been professional and respectful in my relationships with women.”
Meanwhile, medium.com, a left-wing propaganda website, wasted no time in throwing Kimmel directly under the bus. In a piece titled, “What We Need From Accused Perpetrators Like Michael Kimmel #metoosociology” the standard feminist demand was issued for Kimmel to “Acknowledge and believe the survivor even if their account does not fit with his sense of self.”
That’s feminist codespeak for “Admit you did it, you slimy bastard.”
Of course, whether Kimmel did it or not is now beside the point. He’s been accused. In the world Michael Kimmel worked feverishly to create, that is no different than a guilty verdict in a court of law. This is the moment that destroys him.

Read more »
Posted by Angelo Agathangelou at 10:26 pm No comments:

Max and Stacy discuss the ‘happy winners’ of Trump’s trade wars. But are the never-ending sanctions and trade wars turning other nations against the erratically controlled dollar system? In the second half, Max interviews Mish Shedlock of MishTalk.com about why Trump’s trade war is a lose-lose situation and what the real reasons are for America’s mass industrial unemployment.
Posted by Angelo Agathangelou at 8:35 pm No comments:

An elder waves the Palestinian flag during a protest held along the boundary with Israel, east of Gaza City, on 3 July. The protest was part of the Great March of Return series of demonstrations calling for an end to Israel’s siege on Gaza and in support of Palestinian refugees’ right to return to the lands from which their families were ethnically cleansed in 1948. Mohammed Zaanoun ActiveStills The Electronic Intifada: July witnessed the most dangerous escalation in violence in the occupied Gaza Strip since Israel’s summer assault in 2014.
Nineteen Palestinians were killed thoughout the occupied West Bank and Gaza Strip during the month and four more, including a child, died from their injuries after being shot by Israeli snipers during protests in Gaza in May and June.
More than 190 Palestinians have died by Israeli fire in 2018.
The shooting death of a soldier in July marked the first Israeli fatality resulting from Gaza fire since 2014.

Don’t The People Of Gaza Have The Right To Break Free From A “Concentration Camp”?

By Norman G. Finkelstein and Jamie Stern-Weiner: Since the overwhelmingly nonviolent demonstrations in Gaza began on March 30, 2018, the international community has strongly condemned Israel’s armed attacks. 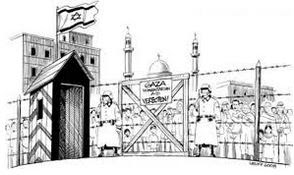 A UN General Assembly resolution “deplore[d] the use of any excessive, disproportionate and indiscriminate force by the Israeli forces against Palestinian civilians,” while the UN Human Rights Council denounced Israel’s “disproportionate and indiscriminate use of force.” After Israeli snipers killed Razan al-Najjar, a twenty-one-year-old unarmed Palestinian paramedic, the UN special coordinator for the Middle East peace process warned Israel that it “needs to calibrate its use of force.” In a devastating report, Human Rights Watch concluded that “Israeli forces’ repeated use of lethal force in the Gaza Strip … against demonstrators who posed no imminent threat to life may amount to war crimes.”


Welcome as these condemnations are, the question nonetheless remains whether they go far enough. Simply put, does Israel have the right to use any force under any circumstances against the people of Gaza?

Read more »
Posted by Angelo Agathangelou at 2:25 am No comments: