"Women labour MPs, feminist labour MPs broke a three line whip in defence of Saudi Arabia. ...I know for whom people are working, I know from what they say, I know from the way that they say it."
***
There can be no case, for selling weapons to the Saudi Regime
By ICH and Agencie: "According to local officials a total of 50 people were killed and 77 were injured this morning. Of these, the ICRC hospital in Al Talh received 30 dead and 48 injured, of which the vast majority were children," Johannes Bruwer, the head of an ICRC delegation in Yemen, said in a Twitter post.
Read more »
Posted by Angelo Agathangelou at 9:58 pm No comments:

Mike Buchanan: Elizabeth Hobson is the Director of Communications at J4MB.
Posted by Angelo Agathangelou at 4:22 pm No comments:

Ian McNicholl ICMI18 - “My Journey From Victim To Survivor”

Posted by Angelo Agathangelou at 12:16 pm No comments: 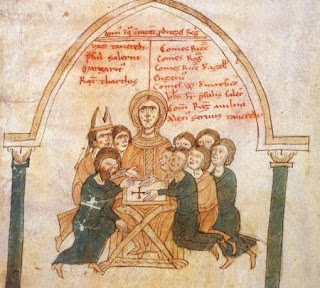 By Author Douglas Galbi: In contrast to gender stereotypes, strong, independent, highly privileged women have governed men throughout history. These women were accustomed to having men do whatever they wished. They understood that men were willing to die fighting on their behalf. They boldly criticized their husbands. With great social sophistication, they used their tears as the ultimate weapon.
When Constance of Hauteville’s husband became King of Germany and the Holy Roman Empire, she became the Holy Roman Empress. In order to uphold her claim to Sicily, her husband engaged in war against Sibylla of Acerra’s husband, who had usurped the crown of Sicily in 1189. Sending Empress Constance away from the fierce men-on-men violence over nominal rule of Sicily, her husband commanded one of his leading men, “Always do what my bride wishes {Facturus semper quod mea nupta velit}.”[1] He probably followed that rule himself.
As many women do, Empress Constance understood that her life was worth more than that of many men.

Read more »
Posted by Angelo Agathangelou at 5:55 am No comments:

'Identity Politics, which helped to impose speech codes
and to create the catgegory of “hate speech”
which any member of a “victim group” can turn against white males, is one source of the censorship that is destroying
free speech throughout the Western World.'

By Paul Craig Roberts: The coordinated attack on widely watched Info Wars host Alex Jones by Apple, Facebook, Google/Youtube, and Spotify is all the proof that we need that the total failure to enforce America’s anti-trust laws has produced unaccountably powerful firms that are able to exercise far more censorship, not only in America but also abroad among Washington’s vassal states, than Stalin’s NKVD were ever able to achieve.
Recently the progressive Rob Kall and I discussed on his show the implications of a trillion dollar company, which Apple now is. A day or two afterward, Rob Kall wrote an article on his website OpEdNews in which he made a case that a trillion dollar company had too much power for our continuation as a free people. I agree with him. Only 16 countries out of 195 countries in the world, a mere 0.08 percent, have a GDP equal to or larger than one trillion dollars.
Think about that. Apple is larger than the GNP of almost every country in the world. In other words, Apple has the power of a major government. Apple could be a member of the G-20. Apple could institute its own currency and be part of SDR drawing rights. Apple could participate as a backer of IMF and World Bank loans. Apple could have its own military and secret service.

Read more »
Posted by Angelo Agathangelou at 3:10 am No comments:

Max and Stacy discuss what happens to a society when physiological needs cannot be met and why that matters in this day and age when Jeff Bezos can claim to be worth $150 billion. In the second half, Max interviews a banker-turned-blogger Michael Krieger of LibertyBlitzkrieg.com about political derangement in the days of Trump and why Google has turned to its dark side in China.
Posted by Angelo Agathangelou at 12:02 am No comments: