Corbyn And The Jewish Question

'In Corbyn’s universe, Jews are just ordinary people and not God’s chosen people.' 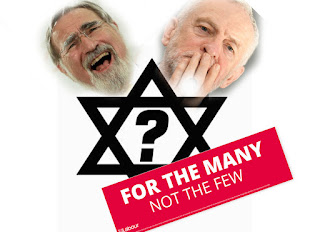 By ex-Jew Gilad Atzmon: It doesn’t take a genius to detect the present volatile state of British Jewish institutions. To the outside observer, some of the actions of Britain’s so-called Jewish ‘leaders’ may seem to be a form of collective insanity. Yet, the Brits do not seem to be at all impressed. They are perplexed by the self-propelled collective hysteria. Naturally, many Brits do not agree with Corbyn on issues; some may not agree with his pacifist politics, others see him as a naïve delusional lefty, a few are upset by his association with controversial characters, but no one except a few Israel firsters sees Corbyn as a crazed ‘anti-Semite,’ let alone as a Hitler type who puts Jewish life under an “existential threat.” While it isn’t clear whether Corbyn can unite the Brits against their horrid government, it is increasingly likely that the Zionist lobby has the capacity to unite the Brits behind Corbyn. A comment on twitter the other day noted that “not supporting Corbyn at this point is an act of treason.”

The Deliberate Pauperisation Of Palestine

The Palestinians are destitute because
Jewish occupiers, through larceny,
have forced them into that condition. 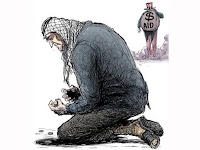 By Fawaz Turki: Say what you want about how American administrations, from former president Harry S. Truman downward, have, over the years, treated Palestinians. But none was so actively engaged in gunning for them as the current one.  Relations between the present-day administration — an administration that from day one has trumpeted itself as the custodian of a mythical “deal of the century” — and the Palestinian National Authority (PNA) took another nose-dive last Friday when leaders in Washington permanently cut more than $200 million (Dh735.6 million) in aid for the West Bank and Gaza, saying the appropriated funds will be “redirected” elsewhere, but didn’t say where the money would go.

300 children [all boys and 3 girls] in Israeli prisons are not in school so far this year. At least one school – in Hebron – was demolished, and its furniture confiscated several weeks ago, but classes started anyway. Education is a basic human right. 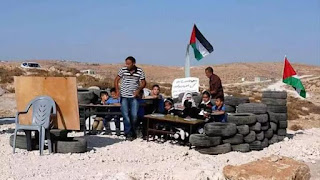 IMEMC: Over 300 Jailed Palestinian Children Did Not Attend the 1st Day of School

Modernized Chinese Navy Will Soon Surpass US, Prompting Fears It's "Game Over" For US In Pacific

By Tyler Durden: Last year the Chinese navy surpassed the United States' own in size, and now Western military analysts are taking note that a new modernization program of its ships and weapons systems have given China significant and distinctive deterrence capabilities in disputed areas of the South China Sea and around Taiwan.
A new, detailed New York Times assessment of China's astronomical recent growth and advancement as a foremost naval power laments this is something that's "shifted the balance of power in the Pacific in ways the United States and its allies are only beginning to digest".

Chinese Aircraft Carrier Battle Group, via Global Military Times
The NYT report sounds the alarm that while US naval firepower remains superior if not spread a bit thinner than China's expanding fleet, American ships can no longer maintain global dominance of Pacific seas with ease: "That means a growing section of the Pacific Ocean — where the United States has operated unchallenged since the naval battles of World War II — is once again contested territory, with Chinese warships and aircraft regularly bumping up against those of the U.S. and its allies." 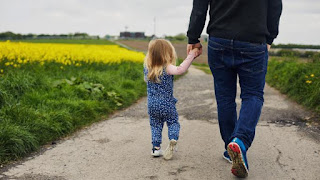 Every daddy’s girl knows that being the apple of his eye has its benefits in terms of access to his wallet. Now research has shown that daughters with a close bond to their fathers are also more resilient and less likely to feel lonely.
Girls who have a strong emotional attachment to their father are more confident when they start school and more likely to perform well in class, the study suggests. It adds to evidence of the crucial role fathers play in enabling daughters to cope with adversity, especially early in life. [J4MB emphasis]
Girls’ relationships with their mothers, however, had no discernable impact on their experiences of loneliness. The way boys reacted to loneliness was also unrelated to their closeness to either parent.
The US study analysed data from a national study of early childcare involving almost 700 families. Researchers considered the relevance to children’s psychological wellbeing of attachment theory, or the deep emotional bond between a child and parent.

Jimmy Dore: Abby Martin and Mike Prysner lay out exactly what happened to teleSUR and Empire Files and how YOU can help.
Posted by Angelo Agathangelou at 3:33 am No comments: Links to this post

Robert Brockway Speaks At The March For Men