Men Are Good!: A look into the ways that masculinity has been demonized and how some of these ways have trickled down into the school system jeopardizing boys. One study is highlighted that examines the dangers faced by playful boys. The research showed that playful boys, exuberant, funny, likable boys were singled out by the teachers in 1st grade and by 3rd grade their classmates had changed their positive opinion of them as playmates to negative. The researchers implicate the teachers in this. Mind blowing stuff.

Read more »
Posted by Angelo Agathangelou at 9:26 pm No comments: Links to this post

Computing Forever:
"Won't somebody please think of the politicians, because they're basically children at this point!"
Read more »
Posted by Angelo Agathangelou at 6:01 pm No comments: Links to this post

Genocide Money
A stack of 3.8 billion dollar bills would reach the International Space Station. The new package to Israel will give Israel ten times that much money. An Israeli official gloated that the package was obtained “despite budget cuts, including defense cuts, in the U.S.” 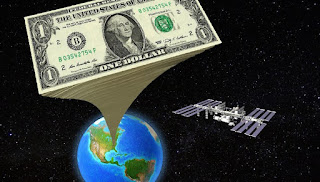 In an unprecedented gift of our executive power to Israel, the House has passed for the very first time a law that forces the American president to give Israel a minimum of $3.8 billion per year. We have, in effect, crippled our ability to promote US interests in the Middle East. The new House version is even more generous to Israel than the Senate bill and the 2016 MOU… it amounts to $7,230 per minute to Israel, or $120 per second…

By Nicole Feied: The AIPAC sponsored bill that guarantees $38 billion to Israel over the next ten years is a dramatic departure from the deal offered under President Obama’s 2016 Memorandum of Understanding (MOU).[1] Passed by the House of Representatives on September 12, 2018, the United States-Israel Security Assistance Authorization Act of 2018 effectively rolls back every limitation that President Obama placed on the amount of aid we give to Israel.

Read more »
Posted by Angelo Agathangelou at 1:27 pm No comments: Links to this post

Barbara4u2c: True story
Posted by Angelo Agathangelou at 10:56 am No comments: Links to this post

Why Populism Is Just Getting Started

The deal those bankers cooked up was to save the banks from capitalism. – From Matt Taibbi’s recent piece: Ten Years After the Crash, We’ve Learned Nothing
By Michael Krieger: While Google executives still attempt to portray themselves as scrappy, enlightened, countercultural tech luminaries, their reaction to Donald Trump’s victory in a recently leaked internal video leaves you wondering whether they understand anything at all about what’s happening around them.
There are two key takeaways I got from the video. First, Google executives are either totally clueless or in willful denial about the state of the country they call home. Second, they’re shameless hypocrites when it comes to the so-called values they claim drive corporate behavior. In other words, they collectively sound just like all the phony, status quo D.C. politician everyone’s sick of.
Indeed, the denial’s so strong co-founder Sergey Brin on more than one occasion claimed many Trump voters were motivated by “boredom.” As if that’s not insulting enough, he goes on to suggest that the rise of authoritarianism and totalitarianism in the 20th century was also likely driven by boredom.
While I can’t speak from personal experience when it comes to the rise of fascism and communism a century ago, I’ve seen enough of the 21st century to tell you 63 million people didn’t attempt to throw a metaphorical grenade into the political system because they were “bored.”

Read more »
Posted by Angelo Agathangelou at 7:34 am No comments: Links to this post

“Heroines? No, The Suffragettes Were Terrorists Plain And Simple.”

This is the first of three posts by BELINDA BROWN on the violent reality of the terror campaign by suffragettes, in contrast to the peaceful suffragists. Despite their activities, which only by luck avoided large-scale casualties, they are now revered as heroines. 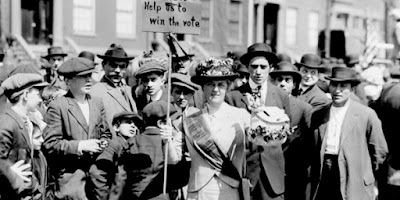 By Belinda Brown: One hundred years of propaganda about the Pankhursts and the suffragettes culminated this year in Lucy Worsley’s BBC drama-documentary Suffragettes. Following the anniversaries of the attacks in Borough High Street and the Manchester pop concert bombing, I found her wallowing in their violence rather odd.
But on the whole we live in denial about suffragette violence. Earlier this year Samantha Smethers, chief executive of the Fawcett Society, urged the Home Secretary to pardon them, telling us that suffragette ‘activism’ was a ‘noble cause’, and that ‘they made such sacrifices so that we could enjoy the rights we have today’. She added: ‘In any meaningful sense of the word, they were not criminals.’
Fortunately the historian and journalist Simon Webb has taken the trouble to plough through books and primary sources.

The US Is A Dead Man Walking... Or Is It A Dead Feminist Zombie Walking?

'How could these guilt-burdened women bear the Israeli state’s systematic genocide of the Palestinians?
Of course, they don’t have to, because NPR never tells them about it.'

Authored by Paul Craig Roberts: ...Or is it a dead feminist, homosexual, transgendered walking zombie?
While driving yesterday, I turned on the car radio to see if the Russian/Syrian liberation of Idlib, Syria, from the Washington-supported terrorists had begun. What I got was two white females deploring white racism on NPR. They were so guilty that they had indirectly benefitted from white racism. I thought I was going to drown in the guilt of one of the females before she ever finished her sentence.
You are not going to believe the “indirect benefit” that produced such wrenching guilt in the white female. But maybe you will. She had purchased a brick bungalow Identical to the one next door in which a black American lived with the difference that the attic in her house had been refurbished, but the black man’s attic had not. Her racial guilt came from the fact that the white person from whom she had purchased the house had been able to refurbish the attic, but her black neighbor had not, apparently because of racism.