By Ali Abunimah: The Trump administration’s top so-called civil rights enforcer at the US Department of Education wanted students who did nothing but hold a noisy protest in support of Palestinian rights to be criminally prosecuted.
Kenneth Marcus was captured on camera during a September 2016 meeting with an undercover reporter working on Al Jazeera’s explosive documentary about the US Israel lobby.
The documentary has never been broadcast due to censorship by Qatar, which funds Al Jazeera, following pressure from pro-Israel organizations.
The above video obtained by The Electronic Intifada is the latest excerpt to leak from the documentary. It shows Marcus speaking to the undercover reporter.

Me Too Attacks - Trump Returns Serve

By Tyler Durden: In what will, we are sure, now become the lame stream liberal media's focus for the next 24hr news cycle, President Trump appears to have weighed in on Supreme Court nominee Brett Kavanaugh's accuser's credibility.
Trump appeared to set the scene for his latest tweet by noting earlier that "Judge Brett Kavanaugh is a fine man, with an impeccable reputation, who is under assault by radical left wing politicians who don’t want to know the answers, they just want to destroy and delay. Facts don’t matter. I go through this with them every single day in D.C."
Which led to the following tweet, questioning the fact that if the attack was as bad we are led to believe, why did she or "her loving parents" not file with local law enforcement?
" I ask that she bring those filings forward so that we can learn  date, time, and place!"
And cue the outraged accusations that he is attacking a poor woman who was too afraid to come forward at the time, because when it comes to this kind of crime accusation, as Trump says "facts don't matter" and you're guilty, period, or something.
However, Trump was not done. He doubled-down on his questioning of Ford's recollection of events, asking "Why didn’t someone call the FBI 36 years ago?"

Read more »
Posted by Angelo Agathangelou at 2:56 pm No comments: Links to this post

"Israel's acting as Al-Qaeda's air force attacking the side that's fighting Al-Qaeda and US is supporting it. This is amazing, the United States has teamed up with the Zionists and Al-Qaeda against the sovereign nation of Syria. ...You've got to blame the Israelis!" Said Dawson.
Press TV: Russian Foreign Ministry has asked for explanations from Israel over the downing of a Russian military plane in the Syrian province of Latakia. Zakharova added that Russian experts have confirmed the actions of Israeli pilots resulted in the downing of the aircraft.

Read more »
Posted by Angelo Agathangelou at 11:32 am No comments: Links to this post

Palestinians Were Never At The Table - Because Chosen-ness 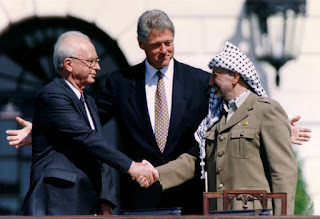 The Oslo accords turned out to be unworkable suberfuge serving only the stronger party: Israel. Gary Hershorn Reuters
By Omar Karmi: This month marks the 25th anniversary of the beginning of the Oslo accords and the signing of the Declaration of Principles in Washington in 1993.
The accords were touted as the only way to reach a permanent peace between Palestinians and Israelis based on the “principles” of mutual recognition and “land for peace.”
An agreement was presented as one where Palestinians would end up enjoying freedom and self-determination on their own territory. What that territory would be in law, as well as the status of Jerusalem and a resolution to the plight of Palestinian refugees, would be addressed over five years of negotiations that were to culminate in 1998.
It was hoped that during this time, mutual trust and confidence-building measures would generate enough momentum to ensure that a final settlement would be unstoppable.
Not only did it not happen, it all turned out to be unworkable subterfuge.

Read more »
Posted by Angelo Agathangelou at 8:08 am No comments: Links to this post

Apocalypse Sweden! Why? + Are We In A Simulation?

"You can't have nations without nationalism."
Russell Brand:
Sweden, migration and The Right what can we learn?

Max and Stacy discuss the ‘win-win’ fallacy in the age of productivity theft. They also react to news of Amazon patenting a cage for human workers to ride on top of a robot safely into ‘robot-only’ zones. In the second half, Max interviews Alakanani Itireleng of Satoshi Centre of Botswana about the role of cryptocurrency in delivering economic liberation and financial inclusion. Alakanani talks about her ambitions for Satoshi Centre, including training up a generation of blockchain engineers for Africa.
Posted by Angelo Agathangelou at 12:09 am No comments: Links to this post