A Review of 9/11 Unmasked: An International Review Panel Investigation by David Ray Griffin and Elizabeth Woodworth 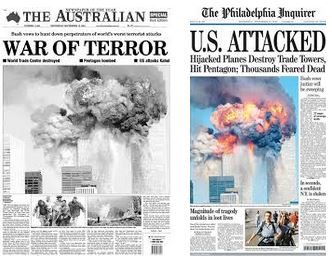 By Edward Curtin: If you want to fathom today’s world, absolutely nothing is more important than to understand the truth about the attacks of September 11, 2001. This is the definitive book on the subject.
For seventeen years we have been subjected to an onslaught of U.S. government and corporate media propaganda about 9/11 that has been used to support the “war on terror” that has resulted in millions of deaths around the world.  It has been used as a pretext to attack nations throughout the Middle East, South Asia, and Africa.
It has led to a great increase in Islamophobia since Muslims were accused of being responsible for the attacks. It has led to a crackdown on civil liberties in the United States, the exponential growth of a vast and costly national security apparatus, the spreading of fear and anxiety on a great scale, and a state of permanent war that is pushing the world toward a nuclear confrontation.  And much, much more.
Read more »
Posted by Angelo Agathangelou at 10:34 pm No comments:

By Gilad Atzmon: Yesterday PM Netanyahu, speaking at the UN, insisted that Israel has found the 'secret atomic warehouse' where Iran is allegedly “storing massive amounts of equipment and materiel from Iran’s secret nuclear weapons programme.”  Netanyahu failed to provide any evidence to support his claim, nor did he try to substantiate his comic assertion that Iranian government officials, in an attempt to dispose of 15kg of radioactive material, had spread the material around the streets of Tehran. 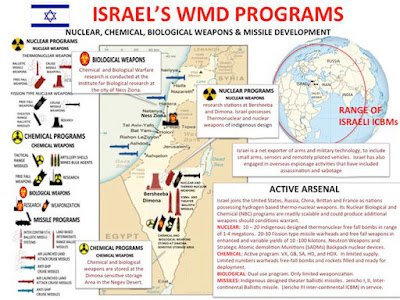 This is even funnier when you consider that the rest of the world knows exactly where Israel’s nukes factory is. The rest of the world also knows that it is actually Israel that doesn’t allow anyone into its WMD plant in Dimona, Rehovot  or anywhere else.
Not for the first time, Netanyahu also brought some visual aids to illustrate his claims, seeming to believe that those who dwell outside of his ghetto are in desperate need of visual explanations.
Read more »
Posted by Angelo Agathangelou at 8:44 pm No comments:

"What Goes Around Comes Around!" Kavanaugh

By Tyler Durden: After an emotional day of testimony on Capitol Hill, a late Thursday report from Townhall citing a Senate insider reveals that Brett Kavanaugh has the votes to make it out of committee and will be confirmed on the floor for a seat on the U.S. Supreme Court.

Sens. Flake (R-AZ), Collins (R-ME), Murkowski (R-AK), and Manchin (D-WV) are expected to vote in favor of Kavanaugh. All the Republicans are voting yes. Also, in the rumor mill, several Democrats may break ranks and back Kavanaugh. That’s the ball game, folks. -Townhall

Thursday's proceedings saw a rollercoaster of emotions from both Brett Kavanaugh and his accuser, Christine Blasey Ford - who claims he groped her at a high school party in 1982.
Ford's testimony was considered compelling, with Senator Orrin Hatch (R-UT) calling her an "attractive, good witness," however betting site PredictIt showed Kavanaugh's odds of confirmation steadily climbing after ranking minority leader Dianne Feinstein (D-CA) laid out Ford's case. He stands at 74% as of this writing.

Read more »
Posted by Angelo Agathangelou at 11:50 am No comments:

Read more »
Posted by Angelo Agathangelou at 11:00 am No comments:

By ex-Jew Gilad Atzmon: All that is left for us to do is to thank British Zionist institutions, the BOD, the CAA, the Jewish Chronicle and the Zionist stooges within British media for making the British Labour party not only the biggest and most united political party in Europe but also a party united behind its leader Jeremy Corbyn and unequivocally opposed to Israeli criminality.

Read more »
Posted by Angelo Agathangelou at 4:51 am No comments:

The cultural center was one of the few major venues in the besieged territory that housed performance and educational facilities for dance, music, theater and poetry.
One organization in the building was the Palestinian Culture Palace.
“We sent messages of peace through our activities,”
Read more »
Posted by Angelo Agathangelou at 2:10 am No comments: