The trade war between the US and China is turning into a hot war with every passing day.

By Tyler Durden: As we reported on Monday, Chinese ships came to actively confronting the USS Decatur while the US ship was carrying out yet another in a series of "freedom of navigation" operations - or "freeops" - in the South China Sea. The Navy destroyer had to maneuver to avoid colliding with the Chinese destroyer Luyang that came within 45 yards of its bow while the Decatur was sailing through the Spratley Islands on Sunday in what was the closest direct confrontation between US and Chinese ships since Trump's inauguration (after which the Navy began conducting these freeops with increasing frequency).
On Tuesday, China accused the US of violating its "indisputable sovereignty" over the Spratley islands, saying in a statement "We strongly urge the U.S. side to immediately correct its mistake and stop such provocative actions to avoid undermining China-U.S. relations and regional peace and stability."

Read more »
Posted by Angelo Agathangelou at 10:38 pm No comments: Links to this post 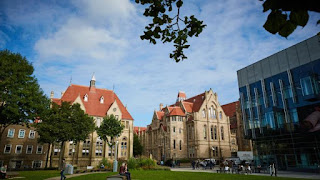 A student union has banned clapping at its events, along with any other audible form of appreciation.
Participants will instead have to use “jazz hands” as a silent way of applauding speakers at Manchester University student union.
The union says that the British sign language (BSL) form of clapping is more inclusive than the traditional loud noise, which it claims could upset some students or visitors.
At its first union meeting of the year, it was argued that clapping should be stopped to accommodate those with anxiety or sensory issues.
According to The Mancunion, a student newspaper: “It [the student union] resolved to swap out audible clapping for BSL clapping at student union events, and to encourage student groups and societies to do the same, and to include BSL clapping as a part of inclusion training.”

Read more »
Posted by Angelo Agathangelou at 6:46 pm No comments: Links to this post

Vanessa Beeley
Posted by Angelo Agathangelou at 12:08 pm No comments: Links to this post

The White Heterosexual Male Has Been Renditioned To The Punishment Hole

By Dr. Paul Craig Roberts: American feminists have finally broken the spirit of the American white heterosexual male. I have been watching for some time the American male, or what little is left of him, meekly accept feminists’ definitions of words and male behavior.
First the feminists turned the male respect for, and politeness toward, women, respect inculcated into my generation, into “sexism.” Today men no longer stand when a woman enter’s a room, and they don’t open doors for them unless it is an elderly and feeble relative. Feminists insisted on getting women off the pedestal and into the rough and tumble world of men.
Feminists also pushed the sexual revolution, especially Cosmopolitan magazine, until women became as sexually promiscuous as men. As sex became casual and as the constraints on male behavior toward women were discredited as “sexist,” boundaries became blurred, and there is plenty of room for confusion. University student sex codes acknowledge the confusion. We see it in the requirements that the male must ask permission for each piece of female clothing he removes from his willing partner.
All of this was entirely the work of feminists.
But today it is the feminist redefinition of words and their substitution of feelings for factual evidence that catch men off guard.

When The World Laughed, It Was Like “The Emperor Has No Clothes” 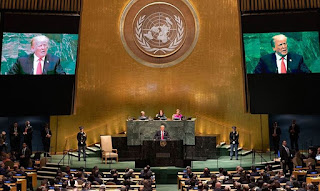 Strategic Culture Foundation - Editorial: For years, US presidents have regaled the UN General Assembly with rosy and ridiculous rhetoric about America allegedly doing great things for world peace.
Notwithstanding such criminal barbarities as the US genocidal wars in Vietnam, Iraq and elsewhere, the UN has tended to be a silent forum while American leaders indulged in fantasies about their nation’s “virtuous greatness”. That silence was either from fear or bamboozlement by American phony rhetoric.
This year, however, the assembly burst out in laughter at President Trump’s vain claims of greatness. It’s about time too. American claims have always been wildly overblown. This year’s disbelieving reaction among delegates was not only appropriate. It also shows that the world openly views US claims as ridiculously disconnected from reality.

Read more »
Posted by Angelo Agathangelou at 5:06 am No comments: Links to this post

'Joyfully cheering about shooting a person trying to clear the access road to his home and calmly discussing other ways to hit him and the other people with him are part of the discordant soundtrack accompanying 51 years of occupation.'

Still photo from April video of Israeli soldiers shooting unarmed protestor. (Video below.)
IAK: Below are some of the latest news reports from the Palestinian Occupied Territories: