Max and Stacy examine President Nana Addo Dankwa Akufo-Addo of Ghana’s assertion that China’s investments in Africa are not colonialism. At the UN, the president noted that he sees leaders of other nations lining up to visit China in order to receive similar investments and that the infrastructure and jobs they are providing are needed. They also look at some research which finds that China’s ‘no strings attached’ aid may actually be better than the Western approach. In the second half, Max interviews Steve Beauregard of Bloq.com about the state of cryptocurrency markets today

So What If Kavanaugh Was At The Party

StudioBrule
Posted by Angelo Agathangelou at 9:47 pm No comments: Links to this post

Round The Clock Oppression Of Palestinians

“Whatever a soldier believes when they begin their military service, there is no way to behave ethically in the occupied territories,” he says. “It’s a system in which Palestinians are always treated as inferior, always viewed as the enemy, whoever they are.
“Every day the job is to inflict collective punishment. We were told explicitly that we were waging psychological war, that we were there to intimidate them.
“In the middle of the night we raided families’ homes, chosen randomly, waking up frightened children. We violently broke up Palestinian protests. I arrested Palestinians every day to ‘dry them out’ – to teach them a lesson, to make them understand who is boss.”

Israeli soldiers escort Ido Even-Paz and his Breaking the Silence tour through the West Bank city of Hebron on September 27,2018. (Heidi Levine for The National)
By Jonathan Cook - The National: Ido Even-Paz switched on his body camera as his tour group decamped from the bus in Hebron. The former Israeli soldier wanted to document any trouble we might encounter in this, the largest Palestinian city in the occupied West Bank.

Read more »
Posted by Angelo Agathangelou at 7:24 pm No comments: Links to this post

Everyone in the Trump administration serves Israel. None serve Americans. 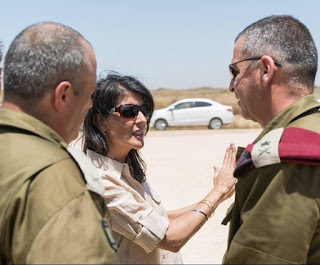 Israel Death Forces
@IDF Spokesperson
Thank you @nikkihaley for your service in the @UN and unwavering support for Israel and the truth. The soldiers of the Israel Defense Forces salute you!

UK Men Under-Represented For Years And Need Equality Too

Men's human rights activist Swayne O'Pie will speak in Oxford this week on why the country needs a 'minister for men.'

Oxford Mail: Swayne O'Pie says he has been banned from speaking by 'snowflakes' at Manchester University and in Cheltenham and has had his posters ripped down when he has tried to stage similar talks before.
He's hoping to convince Oxford of the need for the new Government position to tackle issues such as the high male suicide rate, poor educational achievement among boys and an 'epidemic of sex-related false allegations against men.'
The retired lecturer, who lives in the Cotswolds, said: "Men are the only identifiable group in Britain that does not have any representation.
"We don't want to take anything away from women but they have had a minister since 1997 and men should have the same.
"Men have the exact same issues today as we had 20 years ago.
"We seem to be a lost group in society.
"People tell me there are five times as many male MPs as female but they do not think as a group like women do - they don't do anything to represent men and boys at all."

Melanie Phillips: “Feminists Want To Blame Men For Everything...."

"...Mary Beard’s claim that the PM was set up to fail by male colleagues is a classic piece of nonsense.”
Mike Buchanan, J4MB: A piece in yesterday’s Times: 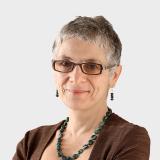 The classics professor and broadcaster Mary Beard is well on the way to becoming a national treasure thanks to her personality and wit. She has conducted herself in an admirably courageous way against much personalised insult and nastiness, giving as good as she gets.
That doesn’t mean, however, that her judgment is flawless. Discussing Greek myths at The Times and The Sunday Times Cheltenham Literature Festival last week, she observed that men sometimes installed women in temporary positions of power so that when these women mucked it all up men could “come in on their white chargers”. This, she thought, might explain Theresa May’s rise to power. “Part of me thinks she has been set up to fail; they needed a female leader . . . to let one of them come in later to rescue her.”

Excuse me? May became prime minister only because she happened to be the last person standing on the battleground after her opponents stabbed each other in the back and themselves in the head.

Read more »
Posted by Angelo Agathangelou at 5:58 am No comments: Links to this post