Politics Of The Penis 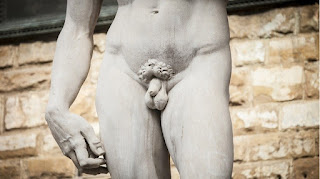 By Mark Dent: If you are a male you would have at some time in your life been concerned about the size or appearance of your penis. The fear of being considered inadequate or different haunts most human beings but there is a particularly deep connection between men’s self-confidence and their genitals.
Men know this and so do women. Sadly, this knowledge has been used to humiliate, taunt, belittle, delegitimize and denigrate men since the time we first walked upright.
I believe this predicament, which all boys and men face, is something women and girls do not have to endure despite the claims that body shaming is something females experience on a constant basis in the media and in their daily interactions.
The first point I always like to make when I raise this subject is the fact that being taunted for your weight is most certainly a hurtful experience but it is something over which every individual has some control and if motivated enough it is something which can be changed.
I cannot recall a time when I saw a character in a movie or sitcom make a nudge wink reference to cavernous vaginas or tiny breasts. There may well have been but this would be a rare occurrence. Derogatory comments about penises are legion in the world of tv and movies.

Read more »
Posted by Angelo Agathangelou at 9:02 pm No comments: Links to this post

Read more »
Posted by Angelo Agathangelou at 1:57 pm No comments: Links to this post

Barbara4u2c
Read more »
Posted by Angelo Agathangelou at 10:50 am No comments: Links to this post

HoneyBadgerRadio: Mike & Alison respond to a platform that anyone cares about (lol) Mirror it if you like. Mirror it while you can. It's not just old media v new media. It's old bullshit v the world.
Posted by Angelo Agathangelou at 5:49 am No comments: Links to this post

A Crash Course On The True Causes Of 'Anti-Semitism' - Pt. 2

It has been over a year since I wrote an article entitled “A Crash Course on the True Causes of “Anti-Semitism.” I tried to illustrate how the kind of ideology and worldview of what ought to be called Rabbinical Phariseeism but is, alas, usually referred to as “Orthodox Judaism,” results in an inevitable hostile backlash from those whom this ideology and worldview even deny the status of “human being.” Today, I want to do something a little different: look at a political tactic which appears to give Jews a very desirable position but which in reality places them all at risk: the use of the accusation of “anti-Semitism” on practically anybody who dares to be critical of anybody and anything Jewish. The following recent headline on RT was what inspired me to discuss this issue:

Trump accused of anti-Semitism over claim Soros funds ‘elevator screamers.’
I won’t take up space here by quoting the article at length so please check it out on the original RT page. Here is just a short excerpt:

Critics of US President Donald Trump were quick to accuse him of anti-Semitism over a tweet claiming that women accosting senators over Supreme Court nominee Brett Kavanaugh were paid by liberal billionaire George 'The National Currency Rapist' Soros.
'Setting aside the fact that Trump has proven to be the best shabbos-goy the Likud ever had'
Read more »
Posted by Angelo Agathangelou at 2:01 am No comments: Links to this post