Paul and Tom talk with Chris Pekgoz about title IX and men's issues. The plan is to do a series on how to file a Title IX complaint. Paul and I will be learning how to do this and showing videos of our learning. It's time to get more people out there filing complaints!

Read more »
Posted by Angelo Agathangelou at 9:25 pm No comments: Links to this post

By Dr. Paul Craig Roberts: The tobacco companies’ response to the US Surgeon General’s report in 1964 linking smoking to lung cancer was countered by the tobacco companies setting up propaganda organizations to create a controversy by generating doubt over the link. This strategy staved off the inevitable for more than two decades.


The same tactic is being used by the carbon energy companies against the independent climate scientists who have established that the climate is warming as a result of CO2 emissions. After a certain amount of warming, feedback mechanisms come into play that accelerate the warming. For example, as CO2 emissions raise temperatures, permafrost begins melting releasing methane, a greenhouse gas that speeds the warming.
Another example of feedback is the loss of sea ice and snow cover on land. Ice and snow reflect the sun’s heat, but the dark surface of the ocean and land absorb the heat, resulting in a further rise in temperature.
The greenhouse gases around the planet trap heat radiation. The oceans, which cover about 75% of the planet, have enormous heat capacity and can soak up a lot of energy. Being very deep, they take a long time to heat up. As the oceans absorb the heat, it takes decades for the atmosphere to heat up. This “climate lag” delays the full impact of global warming.

Read more »
Posted by Angelo Agathangelou at 2:05 pm No comments: Links to this post

Born In A Man

DoctorRandomercam
Posted by Angelo Agathangelou at 10:59 am No comments: Links to this post

Authored by Don Quijones: Cash is less of a threat to central banksters policies when interest rates rise above zero...

Sweden’s Riksbank has become the first central bank in the 21st century to take concrete measures to ensure that cash does not disappear as a means of payment from the financial system. To that end, the Riksbank proposes, in a document published on its website, to make it mandatory for all banks and financial institutions to offer cash services.
The pronouncement comes in response to a recent policy suggestion by the Riksbank Committee that only the country’s six major banks should be obligated to continue offering cash services.
That prompted a backlash from Sweden’s competition watchdog, which argued that the plan would distort competition as it would affect only a few of the nation’s banks. In response, the Riksbank has opted to apply the rule to “all banks and other credit institutions that offer payment accounts.”

'#Metoo and #Kavanaugh, are merely foreshocks
for a main event that will make the Satanic Ritual Child Abuse Moral Panic and the Day Care Sex Abuse Scandals look like family picnics.' 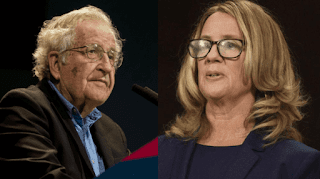 By Jewel Eldora: Our opinions are shaped, in some part, by our media and social media experiences. My writing deals with a quirk in the brains of human males that I believe is creating a slow moving disaster as we move toward a state of perpetual moral panic. Christine Blasey-Ford’s testimony may be something we look back on for reference.
The quirk my writings deal with is the inability of human males to demonstrate automatic in-group bias for one another.  Unfortunately, it has created problems that men can’t fix and the government can’t fix. Neither men nor government have the tools, because, men, are an automatic outgroup and the biases that creates, in both men, and women, are, well, quirky.
This series deals with how this lack of bias plays out, at scale, in traditional media and social media environments.
Outgroup bias is hardwired in the species and has entered a into feedback loop, because of social media.

Read more »
Posted by Angelo Agathangelou at 1:13 am No comments: Links to this post