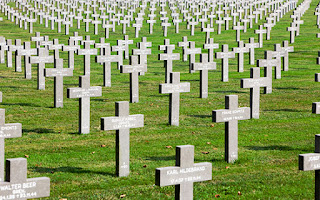 Authored by James Bovard: Politicians will be heartily applauded for saluting American’s soldiers. But if citizens had better memories, elected officials would instead be fleeing tar and feathers. Politicians have a long record of betraying the veterans they valorize.
Veterans Day 2018 has been dominated by the confab of political leaders in Paris to mark the 100th anniversary of the end of World War One. American media coverage fixated on President Trump’s cancellation of one of his two visits to U.S. military cemeteries. In his speech yesterday at a U.S. military cemetery in France, Trump declared that it is “our duty … to protect the peace they so nobly gave their lives to secure one century ago.” But that peace was sabotaged long before the soldiers’ corpses had turned to dust.

Read more »
Posted by Angelo Agathangelou at 10:52 pm No comments:

GlobalFaction
Posted by Angelo Agathangelou at 12:25 pm No comments:

Diana Davison: The CBC has published completely malicious gossip from a source they knew held a grudge and decided not to worry about fact checking. Apparently this is new broadcast standard we can expect our taxes to pay for.
Posted by Angelo Agathangelou at 7:02 am No comments:

Best Way To Honor War Veterans Is To Stop Creating Them 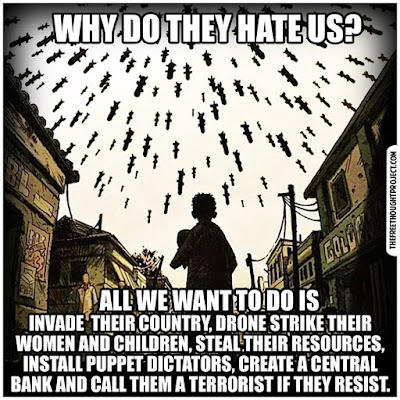 Authored by Caitlin Johnstone: The US will be celebrating Veterans Day, and many a striped flag shall be waved. The social currency of esteem will be used to elevate those who have served in the US military, thereby ensuring future generations of recruits to be thrown into the gears of the globe-spanning war machine.

'Every single person who has served in the US military since the end of the second World War has protected nothing other than the agendas of global hegemony, resource control and war profiteering.'

We Are Heading For Another Tragedy Like World War 1

'No good war, no bad peace.'
Authored by Eric Margolis: We are now upon the 100th anniversary of World War I, the war that was supposed to end all wars. While honoring the 16 million who died in this conflict, we should also condemn the memory of the politicians, officials and incompetent generals who created this horrendous blood bath.

I’ve walked most of the Western Front of the Great War, visited its battlefields and haunted forts, and seen the seas of crosses marking its innumerable cemeteries.
As a former soldier and war correspondent, I’ve always considered WWI as he stupidest, most tragic and catastrophic of all modern wars.
The continuation of this conflict, World War II, killed more people and brought more destruction on civilians in firebombed cities but, at least for me, World War I holds a special horror and poignancy. This war was not only an endless nightmare for the soldiers in their pestilential trenches, it also violently ended the previous 100 years of glorious European civilization, one of mankind’s most noble achievements.