"Hell hath no fury like a woman scorned."
Ex-Jew Nathanael
Posted by Angelo Agathangelou at 10:34 pm No comments: Links to this post

Hamas Won Again - Thanks To Cunning Use Of DIY Fireworks 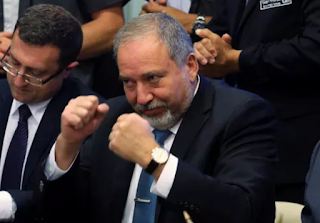 By ex-Jew Gilad Atzmon: Yisrael Beytenu chairman Avigdor Liberman [left: anti-Semite guilty of crimes against humanity] announced yesterday that he was resigning as defense minister and called for the government to be dismantled and new elections held.

Liberman said his decision followed Tuesday’s ceasefire agreement between the Jewish apartheid state Israel and the Palestinian elected representatives and freedom fighters Hamas. Liberman’s action was essentially an open admission that Hamas had won the latest round of violence. “What happened yesterday, the ceasefire, together with the deal with Hamas, is a capitulation to terror. There is no other way of explaining it,” Liberman  told reporters on Wednesday.
Liberman has harsh words for the IDF as well. “What we are doing right now is buying quiet for a heavy price with no long-term plan to reduce violence toward us...To put it lightly, our response was drastically lacking to the 500 rockets [home made fireworks og the resistance v to the US paid for high tech precision missiles the Jewish state uses behind a high tech defence system also US tax payer funded] fired at us.” 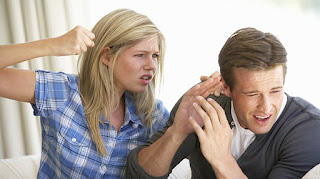 By Tim Patten: Clinical Psychologist’s and researchers have identified the poisonous behavior of aggressive women who resort to verbal assault through gossip, innuendo and character assassination used against other female friends and coworkers. But when women become verbally aggressive against the man, she is falling in love with or dating, the cultural equation is toppled and the relationship reels towards becoming dysfunctional. Female aggression can cause long-lasting harm and even lead to death to you and other young men, regardless of race, background or position on the gender binary.
In fact, when the toxicity of female aggression interacts with healthy masculinity, it often triggers an explosive reaction that can undermine your search for romance and love, especially if you have not learned how to overcome it.

FBI: 'Nearly 500 husbands are killed by their wives each year, while over 4,000 infants annually suffer a similar fate.'
Read more »
Posted by Angelo Agathangelou at 3:22 pm No comments: Links to this post

'Average cost, $11,000 per relationship. Oh, wait, let’s not forget men’s wedding rings. They averaged all of $468 in 2015.  Gender equality, anyone? Just imagine how much money has been thrown away on these trinkets since the cartel and the ad agency folks went to work.'

By Doug Mortimer: One score and 15 years ago, I was working at a large advertising agency.  Among the accounts I was assigned to work on was a jewelry chain store.  Just one problem: I knew nothing about jewelry.  In fact, I had never been in a jewelry store.
Not to worry.  The ad agency had an in-house library filled with books, magazines, and journals related to the accounts they served, so I was able to get up to speed pretty quickly on the diamond industry.  What I learned was sobering.
Like the average dolt, I figured diamonds were rare and hence valuable.  Obviously, they were something of a status symbol for females; showing off a ring to one’s girl friends is a female rite of passage, and a big “rock” enhances a femme’s place in the pecking order.  A woman’s desirability is in proportion to the size of the rock on the ring.  Of course, having no ring at all consigns a woman to the lowest caste, though no feminist would ever admit that.  A woman needs a wedding ring like a fish needs a bicycle, don’t ya know.

Read more »
Posted by Angelo Agathangelou at 12:29 pm No comments: Links to this post

War Criminals In High Office Commemorate The End Of WW1

“As We Honour the 15 Million Dead of 1914-1918, a Demented US President Flies into Paris with Plans to Attack Iran”
By Prof Michel Chossudovsky: In a bitter irony, several of the World’s leaders who were “peacefully” commemorating the end of World War I in Paris including Trump, Netanyahu, Macron and May are the protagonists of war in Afghanistan, Palestine, Syria, Libya, Iraq and Yemen. 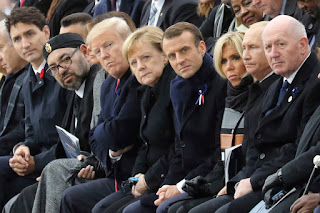 To put it bluntly they are war criminals under international law.


They have blood on their hands.


What on earth are they commemorating?


In the words of Hans Stehling: “As We Honour the 15 Million Dead of 1914-1918, a Demented US President Flies into Paris with Plans to Attack Iran” [with nuclear weapons].

Steven Crowder returns to have real conversations with real people.
Posted by Angelo Agathangelou at 12:19 am No comments: Links to this post