"Immigration fraud and the use of domestic violence accusations. ...There are men across the country who are marrying women from overseas and then find themselves facing false charges as she uses domestic violence as a fast route to a permanent visa, who can easily find themselves in prison if they can't afford to hire lawyers to protect themselves." Said Bettina Arndt
Posted by Angelo Agathangelou at 11:24 pm No comments: Links to this post

On The Offensive:
Denationalise the BBC. It's a corrupt, biased, morally bankrupt institution and
no one should be forced to pay for it.

Why Does America Have 13 Million Households That Don't Have Enough Food To Eat? Dropping 25,000 Mil$ Bombs PA?

Authored by Michael Snyder: Have you ever had a day when your children were crying due to hunger but the cupboards were completely bare and your bank account was empty?
If you haven’t, you should consider yourself to be extremely blessed, because this is what real life feels like for millions upon millions of Americans in 2018.
As you will see below, a third of all Americans cannot even afford “the basics” each month, and 13 million households are officially considered to be “food insecure”.  In other words, they don’t have enough to eat.  Many parents out there choose to skip a meal (or two) each day just so that their kids can have full stomachs.  But sometimes the money runs out completely, and that is when it gets really tough.

Four Special Rapporteurs express ‘deep concern’ that Nation-State Law is ‘discriminatory in nature and in practice against non-Jewish citizens and other minorities and does not apply the principle of equality between citizens, which is one of the key principles for democratic political systems,’ and gives self proclaimed Jewish state Israel 60 days to explain itself. 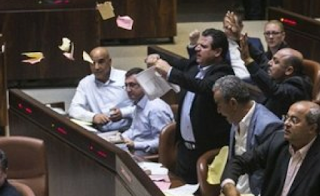 As soon as the Nation-State Law was passed in the Knesset (Israeli legislature), the token Palestinian-Israeli lawmakers “tore copies in protest and were subsequently removed from the Knesset plenum hall.”
From Adalah: Following a special request for action issued by Adalah – The Legal Center for Arab Minority Rights in Israel, four United Nations special rapporteurs have given Israel a 60-day deadline to respond to their grave concerns regarding the Jewish Nation-State Law, adopted by the Knesset on 19 July 2018.
Read more »
Posted by Angelo Agathangelou at 1:33 pm No comments: Links to this post 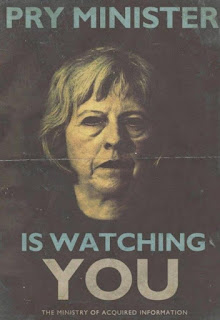 By Tyler Durden: The first time we heard about the British government's "Operation Temperer" was shortly after the dreadful terrorist explosion in Manchester in June 2017, when Feminist Pry Minister Theresa May declared “enough is enough”, and demanded a review of the UK's counter-terrorism strategy.

As Brandon Smith noted at the time, the deployment of over 5000 British troops at strategic locations by Theresa May is all part of a plan established in 2015 called “Operation Temperer”. The plan calls for the deployment of troops within the UK border in response to “major terrorist threats”. As The Mail on Sunday uncovered at the time:


Whitehall officials had kept it under wraps because it contained such sensitive information.
Theresa May, who made the decision, makes her the first Prime Minister to use a new plan for a show of force in the face of a backlash to UK warmongering, in the form of major retaliatory threats.

Read more »
Posted by Angelo Agathangelou at 9:31 am No comments: Links to this post

Syria - Back In The Arab Fold

'That will sabotage [Zio-shill] U.S. and European [vassal] plans to starve Syria of money unless it submits to their will.'
By Moon of Alabama: Following Syria's military success against its enemies, Arab states which supported the war on Syria are again making nice with it. The United Arab Emirates will reopen its embassy in Damascus. Kuwait and Bahrain will follow. Today a delegation of parliamentarians from Jordan visited Damascus and met with President Assad. 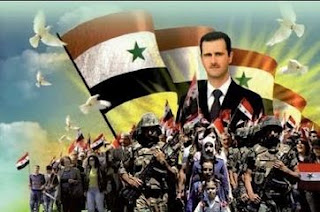 The members of the delegation affirmed that the pulse of the Jordanian street has always been with the Syrian people in the face of the terrorist war against the, as Syria is the first line of defense for the entire Arab region and the victory in this war will be a victory for all the Arab countries in the face of Western projects aimed at destabilizing and fragmenting these countries in service of Israel’s 'security'.

Tripoli Clinton's bathroom buddy Bartholomew has a shady past - he is also implicated in embezzling $10 million from a project to rebuild a Greek Orthodox church near ground zero in Manhattan, destroyed on 9/11.
$25 million in American tax dollars was allocated for a payoff to stir up religious turmoil and violence in Ukraine! 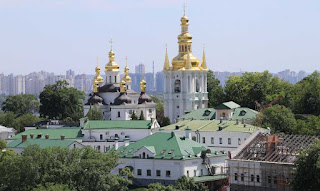 By James George JATRAS: Last month the worldwide Orthodox Christian communion was plunged into crisis by the decision of Ecumenical Patriarch Bartholomew I in Constantinople to recognize as legitimate schismatic pseudo-bishops anathematized by the canonical Ukrainian Orthodox Church, which is an autonomous part of the Russian Orthodox Church. In so doing not only has Patriarch Bartholomew besmirched the global witness of Orthodoxy’s two-millennia old Apostolic faith, he has set the stage for religious strife in Ukraine and fratricidal violence – which has already begun.